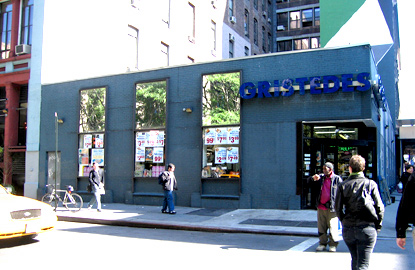 On retail strips all over the city, skyrocketing rents are forcing food retailers out. Instead of groceries, boutiques, banks and drug chains have set up shop.

This alarming decline in supermarkets has reduced options for healthy nutritional choices, a recent New York Times article warned. In place of grocery stores, consumers often have to rely on fast food outlets that offer few healthy choices, or other retail outlets like chain-operated drug stores that sell a limited stock of packaged foods.

Facing high rates of diabetes and obesity in low-income neighborhoods, the Department of City Planning has offered proposals to stem the decline in food stores. The city's health department has already recommended measures such as pushcarts for produce, aid to small grocers, and requirements that fast food outlets post calorie information. But can the city's land use planning agency help reverse the trend and expand food choices to consumers?

The Department of City Planning has now taken up the challenge posed by one of the city's most intractable health crises, which has produced a diabetes and obesity epidemic. An estimated 700,000 New Yorkers suffer from diabetes, and childhood obesity rates are alarming, with 23 percent of black and 31 percent of Hispanic elementary school children estimated as obese.

The City Planning food store study, done in cooperation with the health department and Economic Development Corp., shows that 57 out of 59 community districts in the city fail to meet the department's standard of 30,000 square feet of food retail space per 10,000 population. The planners developed a Supermarket Need Index and, using it, found that the pattern of need is clearly concentrated in northern Manhattan, the south Bronx, and central Brooklyn. These neighborhoods have a total population of 3 million, almost 40 percent of the city's people. The study cites the public benefits that supermarkets bring to neighborhoods as well as barriers confronting food retailers.

In light of the magnitude of the problem, the recommendations in the study appear a bit anemic, failing to take an in-depth look at the many ways land use planning can make a difference. For example, the report calls for removing the limit of 10,000 square feet for food retailers in light manufacturing districts. City Planning, though, proposed this in the 1990s only to see it defeated in the face of widespread concern that the measure would lead to a rush of big box stores and threaten the viability of industrial areas. After the department's recent spate of rezonings throughout the city, there is less industrially zoned land near residential neighborhoods than there was then, but still no guarantee that rezoning them would bring anything but big boxes and condominiums.

The study proposes including retailing opportunities in future rezoning efforts. Simply rezoning an area for retail, though, does not mean that the stores will come. The study also endorses a proposal by the Economic Development Corp. to use city-owned land to promote new retail uses and backs the work of the Mayor's Food Policy Task Force. However the report does not propose new and perhaps more promising strategies that city planners are using in many other cities.

However, urban planners have found that the real solutions have to be crafted at the neighborhood level, and not just city-wide. Also, supermarkets are not the only solution to the problems of food access. And commercial retailing on any scale can be a part of the problem if retailers fail to carry healthy choices.

Community organizations and advocates of healthy food are already creating alternatives to the flagging supermarket sector, all of which could be supported by the city's land use and zoning policies. In the last year alone, new food cooperatives have sprung up in the south Bronx and central Brooklyn. Green markets and community gardens provide fresh produce. Community-assisted agriculture - where residents arrange with producers to get fresh farm products - is growing (according to Just Food there are more than 40 such projects in the city). And some non-profit food kitchens partner with community gardens and local producers.

All of these efforts are on a relatively small scale, but city policy can support them and bring them up to a scale so they can have a greater impact on the food crisis. This, though, would require some aggressive community-based and citywide land use planning.

In other cities, schools set aside small plots of land for growing vegetables and herbs. The amounts produced are minimal, but the gardens are a powerful tool for educating kids about food and nutrition. While New York City is opening up schoolyards for recreation, an initiative spurred by the mayor's long-range sustainability plan, some land could also be used for food production. This also would open up opportunities to introduce composting and other ecological practices to students, teachers and administrators.

It's Not Just Numbers

The Department of City Planning's approach to food access looks only at the quantitative part of a strategy that has to include both quantity and quality. Increasing the amount of land available for retail space and supermarkets is only a part of the solution. More - and larger -- retail space in no way guarantees that food will be more accessible to those who need it the most, especially if retail rents are so high that only gourmet stores will survive. While supermarkets may offer more choices, they too can become high-end boutiques. Unless the strategy of opening up more land is accompanied by one that increases the demand for and access to low-cost healthy food, all the stores in the universe won't solve the problem.

Any policy must also insure long-term access. Unless it can be sustained through periods of real estate peaks and troughs, we will not have community food security - an internationally recognized concept used to plan for food that, if incorporated into New York City's food and land use policies, would help overcome the epidemics of diabetes and obesity.

There is one regulatory measure the city (and state) could use to stop the rising rate of decline in food retailing space in neighborhoods - commercial rent control. It is the perpetual bane of the city's powerful real estate industry, but is probably the only thing that will work to stem the loss of neighborhood retailers. It would allow the city to stabilize local retail strips where local stores are being pushed out in favor of chains that improve neither the range of consumer choice nor access to healthy products.