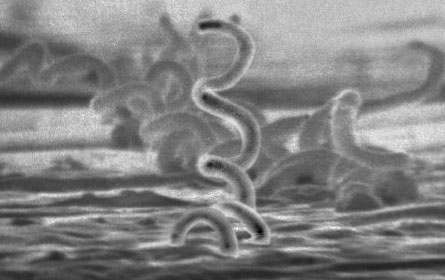 Image from the cdc.gov
Syphilis is caused by the spirochetal bacterium Treponema pallidum.

The solution is not simple, and the cause is even more complex. That's what experts and advocates say about the reemergence of syphilis in New York City and across the country. The number of cases among both men and woman and in all ethnic groups has risen, but the disease hits some parts of the population more severely than others.

In an effort to combat syphilis and other sexually transmitted diseases, the city health department handed out a record number of free condoms this year. Government and private groups have launched public education campaigns, and free testing clinics exist around the city. Still, as the numbers continue to rise, advocates think the city and health organization must design campaigns more closely tailored to the group hardest hit by the increase in the infection: men of color who have sex with men.

In 2000, the national syphilis rate fell to its lowest point since 1941. But it has increased annually since then; New York City cases nearly doubled to 282 in 2001, according to the Centers for Disease Control and Prevention. This year 1,079 cases were reported, up 12 percent from last year. City health department data shows that the highest concentration of syphilis is in Chelsea.

Men who have sex with men account for 87 percent of cases, with the disease most prevalent among African-Americans. Well over half the victims are HIV positive.

Syphilitic sores facilitate transmission and contraction of HIV/AIDS. And the same is true the other way around -- anything that weakens the immune system makes people more vulnerable to other infections.

This bacterial infection spreads through skin-to-skin contact. Congenital syphilis is passed from a mother to her child during childbirth. According to the website of the New York City Department of Health and Mental Hygiene, antibiotics can cure syphilis, but the chances of curing the infection becomes more difficult the longer someone waits to get treated. The most infectious stages of the disease are primary and secondary syphilis. These stages are also the easiest to treat.

A Web of Risks

Experts point to a number of factors that have contributed to the resurgence in syphilis. One is what health experts call "risky sexual behavior," including having unprotected sex and having multiple partners. The 2009 Mayor's Management Report, for example, attributes the rise in the disease "primarily to increases in risky behavior among men who have sex with men." One factor here is substance abuse.

Jose Gonzalez is the founder and president of TRI Center, which offers rehabilitation services in Manhattan, Brooklyn and the Bronx. Gonzalez said there was a "high correlation between sexually acting out and the drug use." He added that education about how to avoid HIV and sexually transmitted diseases can be part of some people's treatment plans. Engaging in high-risk sexual behavior and other compulsive behavior is "just one of the medical aspects of the disease" of addiction, Gonzalez said. He said health clinics should ensure that clients who test positive for STDs are asked about their substance habits to see if they need more comprehensive care.

Social stigmatization can cause these "disconnections" or "isolations," as can particularly difficult transitions in people's lives, like coming out to family members. Hard times can lead to substance abuse and other risky behavior, which could play a factor in the spread of sexually transmitted diseases.

"From an overall prevention standpoint, I think it's really critical that we de-stigmatize LGBT identities," said Davis.

Unprotected sex also has to do with inadequate or absent sex education for young people, said Cahill from Gay Men’s Health Crisis.

While condom use has increased around the city, Cahill said not everyone uses them properly. For example, some people may use lotions that render the condom ineffective. Susan Blank, assistant commission for the city's Bureau of STD Control, said people reported not using a condom during oral sex, when syphilis also can be transmitted.

But risky behavior cannot explain the racial disparity incidence in sexually transmitted diseases. In 2006, non-Hispanic blacks of all ages had the highest rates of chlamydia, gonorrhea and syphilis of any group nationwide, according to the Centers for Disease Control. But national and New York City studies show that gay and bisexual African-American men do not participate in behaviors deemed "risky" at a higher rate than white men who have sex with men.

A New York City report produced as part of the National HIV Behavioral Surveillance Study found that white men who have sex with men "had the lowest HIV prevalence, yet higher rates of many HIV risk factors." For example, binge drinking and alcohol use during sex were more common among whites.

New York City is one of 25 sites participating in the national study, which began in 2004 and focuses on at-risk populations.

Patrick Wilson, an assistant professor and researcher at the Mailman School of Public Health at Columbia, is among those studying why African-American men have higher rates of syphilis than white men. He says a key factor is an individual's "sexual network," such as the number and profile of partners.

In addition, Wilson has found, there is a kind of vicious circle at work here: The prevalence of syphilis and other sexually transmitted diseases among African-Americans produces high rates of HIV and vice versa. Also, Wilson has looked at the characteristics of the sex partners and has found evidence that young African-American men tend to have older partners. Older partners, by virtue of their age, are more likely to have syphilis themselves and more likely to have sex with men of the same race/ethnicity, said Wilson.

"Access to treatment and health care is a huge issue," said Wilson, Dealing with that, he said, is "not an easy step to take but it is a step that we can take."

A 2007 report by the city health department in 2007 found that " Hispanics, men, younger adults, people with low income, and residents of the South Bronx, South Brooklyn, and West Queens are more likely than others to lack insurance and a regular provider." It determined that 25 percent of Hispanics, 21 percent of Asians/Pacific Islanders, 16 percent of blacks and 11 percent of whites in New York City were uninsured in 2005.

The study also compared data on testing for HIV, finding that "among those with two or more sex partners in the past year, those without a regular provider are less likely to have been tested recently." Delaying treatment increases the severity of the virus and likelihood that the infected person will pass it on, whether it's HIV or syphilis.

The Latino Commission on AIDS, based in Manhattan, has tried to create a space geared specifically toward Latinos. The commission’s director of health policy, Oscar LĂłpez, pointed to their MPowerment Project as particularly successful and effective.

"The focus is building community and addressing the feelings of isolation that many experience,” said LĂłpez, who explained that many of the members only speak Spanish and are separated from their families. While the commission only offers HIV testing, the experiences of its members indicate many avoid other types of testing or care. LĂłpez said many of the men he works with have a "mistrust of the system" or worry about deportation, so they either do not seek medical attention.

The city tries to encourage these men to overcome their fears. Its Bureau of STD Control operates 10 free and confidential testing clinics: three in Manhattan (although one in Central Harlem is closed for renovations), three in Brooklyn, two in Queens, and one each in the Bronx and Staten Island.

Blank said that staff doesn't ask for immigration papers before testing a patient. LĂłpez agreed that he had never heard of such a case in New York City, but that undocumented immigrants had been picked up in other states and these stories can act as a deterrent.

The current resurgence in syphilis is surprising but not completely unexpected due to the many factors working together to spread the disease, said Wilson. He believes the trend will reverse but only with a lot of work.

"It really depends on our prevention and our treatment efforts and how robust those efforts end up being," Wilson said. And those efforts have to correspond with the actual trends and the reasons for those trends. According to Wilson, doing that also requires support from all levels of government and funding to bolster efforts already in existence.

On a state level, the New York State Department of Health, AIDS Institute and Center for Community Health, and Health Research, Inc. accepted grant applications last month for organizations working with gay men and men of color who have sex with men.

The city also has made efforts to collaborate with community-based organizations to combat the spread of syphilis. The Syphilis Advisory Group, formed as a direct response to the flare up in 2002, according to an email from the health department press office, is a coalition of the health department, the New York State AIDS Institute and community-based organizations that work with gays and lesbians. The group aims "to improve the quality of internet-based HIV and STD prevention, as well as partner notification services."

The Internet could play an increasing role in this, according to Wilson. Companies have created anonymous online notification systems to allow people to inform past sex partners if they are at risk of infection and encourage them to get tested.

Davis also would like to see advocacy and information at commercial sex venues, where adults to pay to engage in sexual activity on site. This, he said, could keep the parties from going "underground."

The advisory group is looking into this too with the Commercial Sex Venues Workgroup. With the help of the health department, the group plans to "establish new community partners (e.g., owners of sex clubs) to raise syphilis awareness in these venues, increase condom usage, and encourage regular STD screening."

In the past, the city had tried to shut down such establishments. Cahill said he did not see a push for closures recently. But these are fights that date back to the early years of the AIDS epidemic and government closures of bathhouses in an effort to stem the rising crisis.

With the AIDS crisis, there was a tendency to blame the victims. With syphilis, Wilson and others said it is important not to do that.

"There’s not a sound bite that can really explain how this happens," he said. Dwelling on that, he said, could only end up “maligning” affected communities.

Instead, Wilson said, efforts should remain focused on targeting the numerous facets of the disease: "We’ve still got a firefight going on. It’s not at all over."