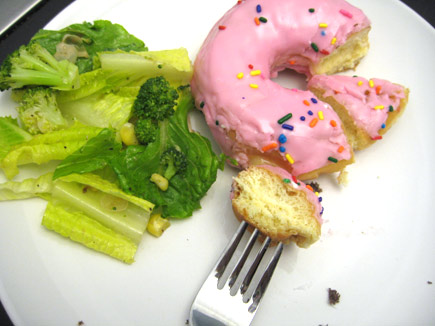 Some snack items pack in a meal's worth of calories.

"It's shocking," said Loreta Gemeviciute of Manhattan, who used to buy Starbucks' Venti Mocha Frappuccinos until she glanced at their 500-calorie stats. "I could eat a whole, good meal for that many calories."

Since calorie counts appeared on menus across the city, New Yorkers have feasted on the cornucopia of data. Some consumers can hardly believe their eyes.

And perhaps they shouldn't.

The rule that went into effect on March 31 requires restaurants with 15 or more franchises nation-wide to post calorie data on menus. Concerned about the city's obesity epidemic, the Board of Health reasoned that people might shun some foods in favor of healthier ones if they knew just how many calories lurked beneath a Big Mac's special sauce and sesame seed bun. But while mandating that calorie data be displayed, the law does not address many issues surrounding the accuracy of the counts. Many nutritionists laud the city's efforts to help New Yorkers eat better, but critics say the law was hastily crafted and will be impossible to enforce.

Meanwhile, consumers will need to realize that all calorie counts are not created equal. Calorie data on New York's menus are subject to far less scrutiny than the nutrition labels on products sold in grocery stores.

For one thing, the calorie content of meals made to order can vary significantly, even at restaurants with standardized preparation methods.

"That's the trouble with food - you can't really get it down to a science when it's made to order," said Marissa Lippert, a registered dietician in Manhattan. "At a mid-level restaurant, will every single chicken breast be three ounces? Probably not. That could make a big difference."

When food preparers toss in a little extra cheese or a little more oil, nutrition data can be thrown off by hundreds of calories. Just ask Quanisha Stackhouse, who works at Nathan's.

The federal regulation concerning calorie counts on food sold in stores requires the number on the label be within 20 percent of the food's actual content. The New York City law, however, does not specify a degree of precision.

"It's indeed a rather extensive loophole," said Chuck Hunt, executive vice president at the New York State Restaurant Association. The association has challenged the rule in court, claiming it conflicts with federal regulations and violates the commercial free speech rights of the food companies.

Proponents of the law argue that restaurant menus usually fall within the ballpark of accuracy. But lab analysis of calorie claims has shown that restaurants' nutrition totals can be wildly inaccurate, even in the case of major chains.

When the Center for Science in the Public Interest, an advocacy group for nutrition and health, independently tested Olive Garden's calorie claims, it found major discrepancies. The chain's cappellini pomodoro, posted as under 640 calories, had 990 calories, or 55 percent more calories than stated. 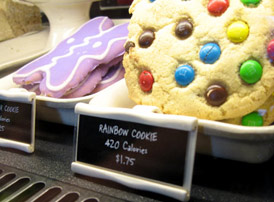 Under the new regulation, city restaurants will largely be taken at their word that the calorie totals they present are accurate. Unlike the federal Food and Drug Administration, the city has no system to police calorie labels.

"We will take appropriate action if we receive complaints; we haven't conducted any testing to date," said Jessica Scaperotti, press secretary for the city health department.

There is also no systematic testing to ensure that restaurants are not miscalculating - or misrepresenting - their data, according to the health department. In contrast, the FDA has complex procedures to test for accuracy under its food safety program.

"FDA inspections are risk based, meaning firms with a history of safety violations get inspected more than those that don't," said Michael Herndon, a spokesman for the agency. "And routine inspections are conducted."

Like the city, the FDA allows food manufacturers to compute their own calorie data, using lab analysis or other methods. But the FDA collects nutrition labels during routine inspections, performs lab analysis to check the listings for accuracy and reserves the power to recall a product from the shelves.

New York's law "is just not written as the FDA rule is written," said Sara Markt, deputy press secretary for the health department. Scaperotti added that the city may conduct testing if a restaurant's calorie data seems suspicious. 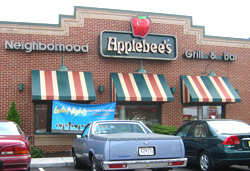 The city's new regulation could be food for lawsuits. Consumers who think a misleading calorie count constituted false advertising could take legal action against restaurants and the city. And since the rule does not set accuracy standards, it could feed disputes between restaurant owners and inspectors with differing interpretations of how precise the data must be.

"There are plaintiff lawyers just lurking in the shadows waiting to bring suits against restaurants for anything they do," said Hunt, who believes the city did not consider the possibility of lawsuits against restaurants when it crafted the law. "The thing about lawsuits is, no matter how absurd and ridiculous the claim is, you still have to defend yourself, and the legal fees are incredible," he added.

Lawsuits are already underway in Seattle against Applebee's and Chili's, for the calories counts on their menus. When a group of consumers was skeptical of the totals and had the meals tested in a lab, they found the food contained significantly more calories and fat than stated on the menus.

"If someone has a dietary or medical restriction, it's problematic and could have health effects," said David Breskin, a lead counsel on the case against these chains.

But since the New York City health department mandates and regulates the calorie information, the city could be at legal risk as well as its restaurants, according to Breskin. "There's a lot of interesting legal issues involved with that, one of which is whether there's a personal obligation owed by the city to a particular individual plaintiff," he said.

According to Breskin, cities are not usually liable to individuals, but some laws interpreted as creating a "special relationship" between individuals and the city open the door for citizens to sue municipal governments. He cited the example of homeowners who sometimes can sue building inspectors who inaccurately assess their properties.

What's A Consumer To Do?

So should you simply ignore the calorie counts?

Not according to Lippert and other nutritionists, who see the new law as a useful step.

"There are a lot of benefits to the information that's being posted," she said. "If there's a sandwich listed as 400 calories and one that's 1,100, people can attempt to choose the lower-calorie item."

The city, though, suggests the total be used in a more precise manner. "Just 100 extra calories every day adds up to 10 pounds a year. Extra pounds can lead to obesity and diabetes, two major health problems on the rise in New York City, as well as heart disease," reads the city's compliance guide issued to restaurants.

Calorie counts off by more than 100 calories already have some consumers baffled. A photo of two Dunkin Donuts franchises showed one posting a chocolate glazed doughnut with 80 calories, while another listed it with 340 calories (sorry, doughnut lovers - it's the latter).

And when Sheryl Imperati , who blogs about the diet that has allowed her to drop from 196 to 146 pounds, saw that Starbuck's peach apple tart had just 120 calories, she thought she'd discovered every dieter's dream. "I almost don't even believe it," she wrote at the time.

Imperati encouraged readers to try the product. "I've been enjoying this fantastic NEW breakfast all week," she wrote.

But Imperati lost the weight by carefully monitoring her meals, and she has learned a thing or two about nutrition. Breaking out a kitchen scale and a calculator, she determined the peach apple tarts that seemed too good to be true were just that.

When Starbucks eventually updated calorie information on the item, the calorie total more than doubled, weighing in at 280 calories.

"I'm surprised New York City hadn't factored in some sort of verification process for the nutritional content that would be posted as a result of the new regulation," Imperati said. "Until there is some accountability, consumers will need to carefully consider the information that is presented to them."