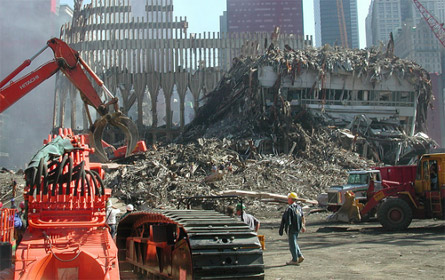 Photo by Matt Morgan
Responders worked to collect remains and clear debris for months after the trade center fell.

"The Tea Party hasn't dealt with John Feal yet," said John Feal, the former construction worker who has been one of the loudest advocates for sick and injured 9/11 rescue and response workers. Missing half a foot as result of his efforts at Ground Zero, Feal often stands out among the politicians and union officials who speak in diplomatic, politically safe terms.

Feal was referring to his movement's latest hurdle: amending the James Zadroga Act -- a bill passed last year ensuring federal funding for 9/11 health monitoring and treatment programs -- to cover certain types of cancers. In July, the federal government announced the bill would not provide medical benefits to first responders who developed cancer. Now the unions and other hope a new report will make their task easier.

Even with a Democratic Congress and the help of the New York and New Jersey congressional delegations, passing the Zadroga bill at all turned into a Sisyphean task in the face of fierce Republican opposition. After a series of compromises, Congress finally approved it last year after what New York Sen. Kirsten Gillibrand called a "Christmas miracle."

The problem is not only that the House of Representatives has fallen into Republican control since then, but that the hard-line Tea Party caucus has proved it will adamantly oppose almost any increase in federal spending. Standing for thrift instead of helping first responders becomes more mainstream with each passing year since 9/11.

Even in the five boroughs, criticizing the Zadroga bill -- named for a New York police detective who died from what many believed were 9/11 related-illnesses -- is no longer political suicide. Bob Turner, the Republican running for the House seat vacated by Anthony Weiner, said the bill was "too broad" because it covered of volunteers. He has the endorsements of former mayors Ed Koch and Rudy Giuliani, as well as Long Island Rep. Peter King, a Republican credited with fighting opposition to the bill in his party.

A Fight Over Evidence

In announcing their decision not to cover cancer victims, federal officials said no solid evidence existed linking the cancers to exposure to the toxins found at the former World Trade Center site.

The reportby the National Institute of Occupational Safety and Health, though, also said that there was no evidence that a link did not exist. Trying to prove things one way or the other, the institute said, presents a challenge because there are few published studies on the issue- - and even fewer that were peer-reviewed -- and because cancer is "not a rare disease."

The federal government expects to review the issue again in the middle of next year.

Last week, though, responders got a boost when The Lancet released a study that, the New York Times reported, "says firefighters who toiled in the wreckage of the World Trade Center in 2001 were 19 percent more likely to develop cancer than those who were not there."

The Lancet reported it found "a modest excess of cancer cases" in those who were at the trade center site. It said it remains cautious about the findings because of the short time since the 9/11 attacks and because the increase is not confined to any particular type of cancer.

Feal, though, dismissed such hesitancy. "I don't need a doctor or a scientist to tell me that 9/11 caused cancer," he said. "We see the pain and suffering every day and we expect with this study that cancer be added to the bill in an expedited manner."

Union leaders like Uniformed Firefighters Association President Steve Cassidy have noted in the past that responders under the age of 40 have already developed cancers, even though the initial reports said they would take at least 10 years after 9/11 to occur. 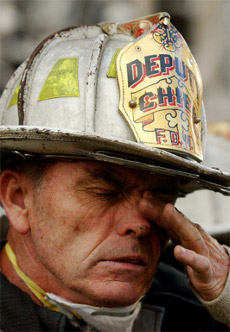 Photo by Marion Doss
Three days after the attacks, a firefighter wipes soot from his eye at the World Trade Center site.

"Cancer is the quintessential disease," Feal said, noting that these types of cancers are either hereditary or caused by carcinogens. "We have the statistics and the numbers, and they can't deny it."

Last week, the federal government announced one expansion of the program â€“ extending it to people who lived and worked south of Canal Street. Originally the compensation only applied to people who had been south of Reade Street, about 10 blocks farther south.

At the same time she ruled out extending benefits to cancer victims, at least for now.

Hurdles Along the Way

On the one hand, implementation of the Zadroga act is working well, according to advocates, both in terms of ensuring that the 9/11 health centers can operate without the distraction of operating on annual appropriations and in allowing sick responders to seek compensation.

"They're not looking over their shoulder any more," Feal said of health providers. "Everything is up and running smoothly. That's a bonus. The compensation part is going to start in October. We're on track. Everything we've predicted in the past is coming to fruition."

But getting to this point has been a political drama. First, the city’s chief medical examiner claimed that Zadroga had, in fact, not died of 9/11 illnesses but from prescription drug abuse. While this didn’t directly affect the proposed legislation, it damped his name’s significance.

In late 2008, Congress delayed voting on the bill to attend to the emerging financial crisis. And when a Democratic House seemed to ready to pass the bill, it used a rare parliamentary procedure to block voting on Republican amendments to the bill, in particular one that would bar undocumented immigrants from benefiting from the law. That maneuver meant the bill needed a super-majority to pass, rather than 50 percent plus one, effectively killing it at the time.

The bill finally did come through last year with some compromises on funding, but Republicans demanded language that required that all recipients of Zadroga bill aid be checked against the terrorist watch list. The screening found no terrorist suspects seeking aid.

"They made this big deal about nothing," said Bill Henning, the chairman of the New York Committee for Occupational Safety and Health. "It was just so insulting."

Beyond helping those disabled by their time on "the pile," union officials and health advocates hope the information that comes out of the compensation fund can help future workers. On Sept.16, the New York Committee on Occupational Safety and Health will hold a conference titled "Protecting Worker and Community Health: Are We Prepared for the Next 9/11?" with speakers including World Trade Center Health Program director John Howard and Occupational Safety and Health Administration chief David Michaels. The reason so many workers are sick now, advocates say, is that the city did not provide adequate masks to protect responders from the toxic soup at Ground Zero. They also claim that the U.S. Environmental Protection Agency at the time made overly optimistic statements about the air being safe to breath.

As Feal noted, the current state of health care for the workers might be adequate, but it has been a struggle to get Congress to commit the federal government to funding these programs.

"We lose a lot of good people in every battle we have to face: a firefighter, a cop, a construction worker," Feal said of the responders who have died in the meantime. "It's a shame that they don't get to see the good."