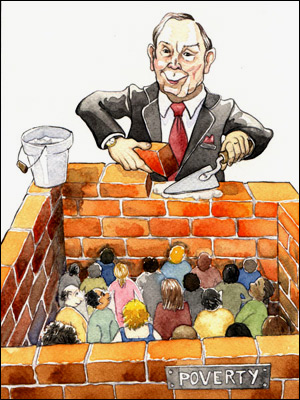 Nicole Thomas, a 29-year-old mother of two, has been on and off welfare for years. With a tenth-grade education and a resume that includes jobs in fast food and retail, she knew she needed more education to find the kind of steady job that would enable her to support herself and her family. But when Thomas told city welfare officials she wanted to fulfill her mandatory 35-hour per week work requirement by attending a GED (high school equivalency) program, they informed her she could attend classes only two days a week, and had to spend the other three days working as a receptionist at a nursing home. Frustrated that the city's inflexibility would more than double the time she needed to get her GED, Thomas left the welfare-to-work program and started an internship at Families United for Racial and Economic Equality ("FUREE"), a grass-roots organization that supports increasing welfare recipients' access to training and education. While she worries this may jeopardize her welfare grant, she hopes to pass the high school equivalency examination soon and then find a job so she can leave welfare permanently.

The lives of people like Nicole Thomas were supposed to get easier, not harder under Mayor Michael Bloomberg. Unlike his predecessor, Mayor Bloomberg seemed to understand the importance of addressing barriers to employment rather than single-mindedly trying to reduce the welfare rolls. Advocates talked optimistically about the mayor's more open-minded approach to welfare reform.

But the Bloomberg administration has since reversed course, taking aim at programs to increase welfare recipients' access to education, training, and permanent jobs. That the mayor has done so through litigation is particularly ironic in light of his frequent criticisms of advocates for pressing their claims through the courts.

Last year, the mayor sued over a transitional jobs program law that would have required the city to create 2,500 jobs for welfare recipients at government agencies and not-for-profit organizations for one year to help them make the transition to permanent employment. The suit did not attack the program's merits, but claimed it was "preempted" by existing state legislation granting authority over jobs programs to the city's top social services official, a Bloomberg appointee. In May, a state court judge ruled in the mayor's favor and invalidated the law.

The mayor recently returned to court to challenge the Coalition for Access to Training and Education law, also known as CATE, passed by the city council in April over his veto. This law represents the culmination of efforts to create a viable alternative to dead-end workfare assignments. It allows welfare recipients to satisfy welfare work requirements, which can reach up to 35 hours per week, by engaging in education or training activities, including college classes, GED programs, vocational training, adult literacy, and ESL courses. Previously, participation in these activities remained within the discretion of city welfare officials, who often resisted any alternatives to typical job search and workfare assignments. The mayor's legal complaint does not challenge the basic assumptions behind the law but rather boils down to a turf dispute with city council over who should determine welfare policy.

Experts widely agree that education and job training provide the best opportunity for people to leave welfare for lives of independence and self-sufficiency. Eighty-seven percent of welfare recipients in New York City who graduated from a four-year college stayed off welfare. While conservative policymakers tout the value of even the most menial labor, typical workfare assignments like sweeping streets and cleaning parks rarely lead to permanent employment in today's high-tech, service-oriented economy. In New York City, over 75 percent of employers require at least two years of college for any entry level job. Also, work requirements have previously served as a tool to cut people from the rolls for missed appointments or other forms of supposed non-compliance. While the rolls have dropped significantly in the city since the late 1990s, it is far from clear that welfare reform has actually reduced poverty. Education, along with employment skills and child care assistance, remain leading barriers to permanent employment. Of those remaining on welfare in New York City, over 50 percent lack a high school diploma or GED.

When Ramona Ledesma, who is originally from the Dominican Republic, applied for welfare she felt she understood better than anyone what had prevented her from finding a permanent job. But welfare officials immediately forced her to split her time between a workfare program and job-preparation classes. It never occurred to them, she recounted in her testimony before the city council, that the first step to prepare her for work was to enable her to learn English. To make matters worse, her case was closed twice due to administrative error, requiring her to start the process from the beginning each time.

In part, Mayor Bloomberg's rigid view of work requirements reflects a broader shift at the national level. Even before President Bill Clinton promised to "end welfare as we know it," the federal government had been seeking to reduce dependency by shifting the emphasis from welfare to work. A 1988 federal law imposed a comprehensive scheme of mandatory work requirements on welfare recipients, though the law also favored training and education programs over workfare. The real change came with the welfare reform act of 1996, formally entitled the "Personal Responsibility and Work Opportunity Reconciliation Act." This act replaced the federal entitlement to cash assistance with a block grant to states and imposed a system of strict work requirements on recipients. While it permits states to choose whether college courses and other education programs can be applied towards an individual's work requirement, the act simultaneously prohibits states from counting those individuals in satisfying their mandatory overall state-wide participation rates.

Federal law still allows for innovative programs like the city's access to education and training law because at most 50 percent of the total welfare recipients in a social service district must currently participate in a work program -- and less if, as in New York, a state has earned credit for reducing its overall caseload by a specified level. Still, as a result of changes in federal law and the city's response, the number of welfare recipients in college has declined from over 25,000 in 1995 to under 5,000 today.

Despite the new jargon about "personal responsibility," trying to solve poverty by making poor people work is hardly innovative. Under the poor laws of seventeenth century England, assistance was limited to the "deserving" poor, a category consisting mainly of the old and infirm. Able-bodied indigents who refused to work could be convicted of vagrancy, confined to a workhouse, or publicly whipped. This moralistic and punitive view of poverty helped shape the development of welfare in America. According to Mimi Abramovitz, a professor at the Hunter College School of Social Work and expert on social welfare policy, opposing measures like the access to training and education law, "punishes single mothers for being single mothers." Although today's "work first" initiative portrays itself as inculcating welfare recipients with a good work ethic, it fails to provide the corresponding skills, education, and access to permanent jobs they need to succeed.

Then there is the old unwritten rule that those receiving public assistance must remain worse off than those with jobs. If welfare benefits were competitive even with minimum-wage salaries, so the argument goes, people would lose their incentive to work. By extension, single mothers would be getting an unfair advantage over the working poor if they received a free government handout while taking college courses or learning English as a second language.

Making welfare recipients work rather than improving their access to training and education has a further advantage, at least to the private sector. "By increasing the competition for unskilled, low-wage jobs, work requirements help keep wages down and labor costs low," says Abramovitz.

Mayor Bloomberg, who ordinarily opts for pragmatism over ideology, has recently adopted conservative slogans about the uplifting value of work that bear little relation to the hard evidence about workfare programs. A recent report by the Brookings Institution observes that only nine percent of those who enrolled in New York City's main workfare program found unsubsidized employment.

The mayor has expressed concern that local training and education laws could place the city in jeopardy of losing federal welfare dollars if work requirements are tightened when Congress takes up reauthorization of the 1996 act later this year. Yet the access to education and training law itself explicitly avoids that problem by requiring that participation rates remain within existing mandates. Nor does the city's current fiscal crisis justify the mayor's opposition towards the transitional jobs program, which was overwhelmingly funded by the federal and state government, with the city contributing only $4 million of the total estimated $50 million cost.

While work requirements have become a permanent part of the American welfare system, true reform will rely not on slogans but on innovative policies that address the real obstacles to permanent employment confronting welfare recipients.