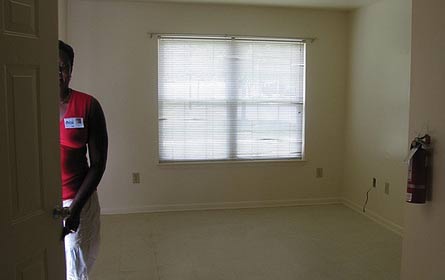 It's been some 40 years since the federal Fair Housing Act was passed allowing the Department of Justice to prosecute "patterns or practices" of housing discrimination" and 20 years since that act was amended to permit the department to act against municipalities that violate fair housing standards.

Yet housing discrimination persists in New York, according to the Fair Housing Justice Center, a city-based non-profit fair housing organization. The city's acute shortage of affordable housing combined with the fact that "real estate brokers and agents handle much of the rental market, unlike any other U.S. city" has created an unchecked system riddled with corruption and abuse, said Diane Houk, executive director of the center.

Even though city government has taken some measures to fight this kind of discrimination, fair housing advocates still see the need for better and more flexible enforcement. They say that all levels of government have failed to keep up with rapid technological changes -- like the advent of the Internet to advertise apartments -- to monitor compliance and ensure rules are followed.

The Fair Housing Justice Center's latest data reveals a considerable increase in complaint volume. Since opening in 2005, it has received some 400 allegations of housing discrimination, about 55 of which have led to lawsuits or the filing of agency complaints. The most common complaints registered "involve allegations of discrimination because of a person's disability or source of income discrimination." This kind of discrimination may occur against tenants who lawfully pay rent with money other than earned income, usually in the form of a government subsidy.

Utilizing statistics from the most current census, the Fair Housing Justice Center determined the New York City metropolitan area is the fourth most segregated metropolitan area in the United States for African Americans and the fifth most segregated for Latinos. As recently as this month, the federal Department of Housing and Urban Development charged two Queens landlords for denying housing to prospective black tenants in what the landlords described as a "white neighborhood."

The center's findings reflect national indicators. Earlier this spring, the National Fair Housing Alliance issued its annual trends report based on surveys from member organizations and data from state and local governments, and federal agencies such as the Department of Housing and Urban Development and the Justice Department. The alliance concluded 2008 was a peak year for housing discrimination complaints, reaching almost 31,000, an increase of 3,735 since fiscal year 2007. This is the highest total number of complaints ever taken from all reporting agencies.

The increase may have been fueled by the economic downturn and the foreclosure crisis, as people who have lost their homes turn to the rental market. These problems have disproportionately affected minority communities, who face the greatest threat of housing discrimination

Barriers for the Disabled

The disabled find themselves at a particular disadvantage in New York's housing market. A Fair Housing Justice Center 2007 newsletter cited New York City for "substantial non-compliance with â€¦ accessibility requirements" for all new multifamily buildings. Federal standards call for accessible common and public areas and sufficient floor space in bathrooms to allow wheelchairs, among other features to accommodate the disabled, but the city, according to the center, has not enforced the rules.

In 2008, the U.S. attorney for the Southern District of New York filed charges against a private development group, Chrystie Venture Partners/Avalon Bay Communities and others, for discrimination against people with disabilities in the design and construction of a building in the East Village, which was built only a few years ago. The developers flaunted the accessibility rules even though the building was constructed on one of the city's last remaining large plots of land and in conjunction with the city's Department of Housing, Preservation and Development.

In 2008, City Council targeted a different kind of discrimination as it moved to protect people who receive housing vouchers, disability payments or other types of government assistance to help pay their rent. The legislation bars landlords from refusing a person's eligibility to let an apartment because of an income source.

The Bloomberg administration and the city's Commission on Human Rights, designated to enforce the measure, opposed the bill. Council then overrode Mayor Bloomberg's veto.

Patricia Gatling, chair of the Commission on Human Rights, explained the administration opposed the measure as a matter of semantics more than substance. There was, she said, "concern over the wording and who would be most affected by it, particularly in the case of small landlords where it would not be cost-effective for them to retrofit their units" to be able to rent to someone receiving disability payments.

Now that the law has gone into effect, Gatling enthused, it "has been really effective." Of the almost 1,000 cases a year the human rights commission reviews, about 20 percent now relate to source of income housing complaints. The law, she said, has been especially beneficial for long-term tenants receiving subsidies. "We're seeing cases [dating] from the Koch administration," Gatling said. "People can use vouchers now who couldn't before."

In addition to lax government enforcement -- particularly on the federal level -- fair housing advocates say a key culprit in illegal behavior has been Internet advertisements and postings on list services.

"Internet advertising is becoming more and more important in how people look for housing, especially apartments to rent, so even if a few illegal ads are posted, this discourages renters from contacting the landlords and gives the impression that it is legal for a landlord to refuse to rent to a family with children, for example," explained Houk in an e-mail.

The Fair Housing Justice Center conducted its own analysis of apartment postings on one such service, Craig's List, over several days during 2008 to monitor compliance with fair housing procedures. The study, "No License to Discriminate," found countless examples of apartment listings with "conditions" --many of them placed by licensed real estate brokers who should know better. Examples ranged from limiting family size to phrases such as "no government programs."

Houk criticized city government, and the Commission on Human Rights in particular, for a lack of aggressiveness to force compliance. "We are not seeing vigorous enforcement by the commission or other city agencies of this new provision." she said.

Commissioner Gatling vehemently disagreed with this analysis. Since the bill's passage, "there's so much more work." To address that, Gatling said she is considering "sectioning off some attorneys" to work exclusively on housing discrimination/income source cases.

Although Gatling said her staff carefully keeps an eye on Craig's List, she wants the city to adopt a policy mandating that developers who publicize vacant apartments must advertise throughout the mainstream printed media and not just at sites aimed at their targeted demographic. Because more people could be notified about empty units, this would "improve access to new and bigger buildings."

Ultimately, Houk would like to see better, more updated training of realtors and brokers, better enforcement from the city and state, and significant and consistent penalties for breaking the law.

The Real Estate Board of New York declined to comment in time for this article; the New York State Association of Realtors did not respond to multiple requests for comment.