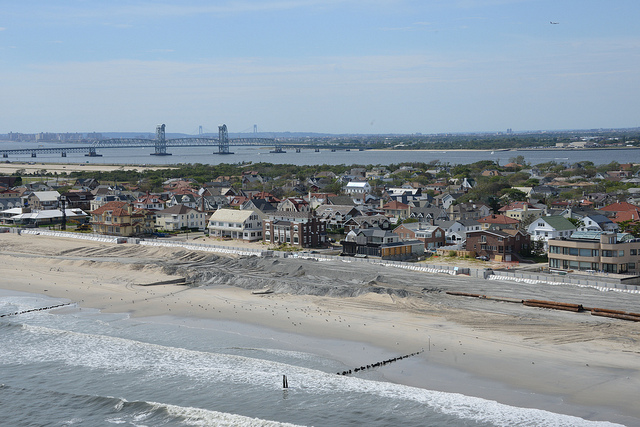 NEW YORK — If the water that destroys much of your house comes up from below the structure, would you describe that as a flood? Grantley Hunt was mulling this question when his insurer balked at covering the damage caused by Superstorm Sandy over a year ago to his two-family house, which has an almost unobstructed view of Jamaica Bay in Queens.

The house is almost dead even with the bay. But Hunt was ready – he thought he was ready – when the water from the bay surged onto the streets of the Rockaways one year ago: He had encircled the house with sandbags.

“There was no way that water was coming into my house,” he recalled thinking. “So, when my son told me there was water in the basement, I said, ‘No, that’s not possible.’”

But the water was rising in the basement. “Oh Sandy, she fooled us,” Hunt said, his tone of voice changing as he started to talk about the hurricane as if she were an unannounced visitor. “She came from under the house!”

{pullquote}If the water that destroys much of your house comes up from below the structure, would you describe that as a flood?{/pullquote}

To Hunt, it didn’t matter how the water had gotten into the house — only that it did. But to his insurer, water that comes from underneath a house is technically not a flood, Hunt said, and his insurance company told him so when it refused to cover some of the damages. Up to now, Hunt has paid for all of the repairs himself – about $22,000 to rip out the dry wall that was soaked, replace appliances and electrical fixtures, flooring.

Like thousands of others whose lives were upended by the storm on Oct. 29, 2012, Hunt and his family may have escaped the storm surge, but a year later, the floodwaters’ toll on housing in New York City persists.

Forbearances on mortgages are set to expire, flood insurance premiums are expected to rise significantly and affect a larger number of homeowners due to new flood maps and the release of disaster recovery funds that could help homeowners has been slow.

All of the problems have compounded an already acute affordable housing crisis in the city.

“Hurricane Sandy exposed a lot of the deficiencies we have in affordable housing in New York City,” said Nick Charles, spokesman for the Local Initiatives Support Corporation of New York, which has overseen a mold remediation program in affected areas. “These are communities struggling with economic, social, and education issues. Hurricane Sandy comes in and exacerbates all of that.”

And other advocates warned that the expiring forbearances on mortgages — usually lasting 12 to 18 months — is a crisis in the making. “There’s a potential for a large foreclosure crisis – tens of thousands will be at risk of foreclosure,” said Matthew Hassett of the Center for New York City Neighborhoods.

The Federal Emergency Management Agency has spent $6.6 billion overall and almost $1 billion in New York to help homeowners pay for repairs, dislocated tenants pay rent, and to cover additional costs associated with the storm. The National Flood Insurance Program has paid nearly $3.4 billion in claims to 56,766 policyholders, the agency stated in a press release. Congress approved about $60 billion for storm relief overall.

The city itself allocated $108 million for repairs to New York City Housing Authority buildings – 402 of which were in the surge area, the agency said in an email, adding that those buildings are home to nearly 36,000 residents. The city demolished 275 buildings and issued almost 2,000 violations on buildings in the areas affected by the storm.

{pullquote}There’s a potential for a large foreclosure crisis – tens of thousands will be at risk of foreclosure," says one housing advocate.{/pullquote}

But all of that money has not been enough to shelter some people rendered homeless by the storm: Some evacuees continue to be displaced, with as many as 200 people still living in hotels paid for by the city.

Advocates say that number doesn’t encompass others who are living with relatives and renting apartments. “That’s really only a small fraction of the people who are displaced,” Hassett said.

The storm has put the city’s affordable housing issues atop the list of issues facing the city, advocates said – just in case the record number of homeless people in city shelters had not already.

Housing First!, a broad coalition of community, business, labor, civic, and religious organizations, issued a set of recommendations for the next mayor to turn concern into action.

"Looking forward, the next administration must not only redouble rebuilding efforts but must also partner with state and federal agencies to tackle the prohibitive insurance premiums that threaten to further damage our coastal communities through displacement and disinvestment,” said Rachel Fee of Housing First!

The city has estimated that the cost just to repair housing damaged by the storm will reach $3 billion.

The signs of Sandy remain visible in Far Rockaway. In Hunt’s house, two-by-fours are laid bare in the walls, where workers cut out paneling that was soaked. The work is on hold, however, because Hunt’s insurance company is balking at paying for the repairs. Aside from arguing over the definition of a flood, the company also insisted he did not send in a form years ago that would have continued his insurance; he said he sent it three times.

The Legal Aid Society has retained additional attorneys to help homeowners and tenants navigate the process of obtaining help from FEMA and insurance companies.

Since the storm, requests for legal aid have increased rapidly, according to Tashi Lhewa, one of the attorneys.

"The real problem is the lack of uniform guidelines by government agencies providing repair assistance" Lhewa said. "This leads to applicants being denied assistance on improper grounds and lacking access to an adequate appeal process."

As for homeowners’ efforts to obtain payments, he said the process is very time consuming.

"Claims have been taking time — a lot of time," he said. "And there's still a lot of people who need help."

The city launched a repair program, too, with FEMA called “NYC Rapid Repairs.” According to the city’s after-action report, “Rapid Repairs is the first program of its kind in the country and repaired approximately 11,500 homes with more than 20,000 units when it concluded in April 2013. At the peak of the program in January, Rapid Repairs completed work on more than 200 homes per day with labor from more than 2,300 skilled workers in a single day working under 10 prime contractors.”

In June, the city introduced “Build It Back,” another program to assist those impacted by the hurricane. The city extended the deadline to apply for the program to Oct. 31 and is urging people who were affected to apply. The city also reduced property tax payments for property owners in affected areas.

Hunt got some good news in August when his application for assistance from the Build It Back fund had been approved. But he has yet to see any of the promised money.

Not far from Hunt’s house in Far Rockaway, dumpsters line the streets and emergency heating systems are set up. The entrance to Breezy Point is guarded by a police checkpoint. Still, businesses are gradually reopening and life is getting back to normal, Hunt said, even though the local home improvement stores cannot seem to stock enough tiles, paneling and other building supplies.

“There has definitely been a psychological impact, lots of people won’t admit it, but it has affected them,” Hunt said. “Me, I’ve always been a little crazy.”

Hunt, a veteran of the Vietnam War, owns an almost identical two-family home next door and he had rented one floor of the house to a woman and her two children. The family evacuated in a hurry as the hurricane approached, leaving behind papers, family pictures and clothes.

Hunt recently gave a reporter a tour. A framed copy of the serenity prayer hung on a wall next to the Ten Commandments. Red Cross blankets scantly covered a couple sofas.

“I won’t throw it in the street – that’s a constructive eviction – and it wouldn’t be right,” he said, scanning the apartment recently. “A lot of tenants who’ve left, I don’t think they’ll ever come back.