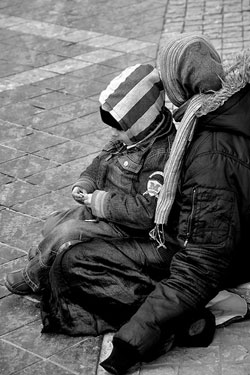 Christine Nieves clung to a child-sized coat slung over her chest just outside of the Auburn Family Shelter.

It was one of the first December days where a conversation would leave a trail of chilly smoke -- a clear sign winter was approaching. Nieves, 27 years old and Manhattan born, has been calling the city-run Brooklyn shelter home since early summer, she said. Nieves and her three children, two boys, ages 6 and 7, and one girl, 9, have been in and out of the city's shelter system for two years, she estimates.

"There is always a lot of fights in the building," said Nieves. People -- Auburn houses both families and single women -- "bring in drugs, liquor, knives," she added.

Her small children share a "dirty" bathroom with other families.

But for Nieves, things could get worse.

As part of an attempt to close a $3.3 billion budget hole next fiscal year, the Bloomberg administration proposed nearly $1.6 billion in new cuts last month, nearly $19 million of which would strike the Department of Homeless Services over the next 18 months. To close the gap, the department wants to try housing single-parent families with small children in shared "apartment style" units. It plans to scale back the realtor fees for placing homeless families in permanent housing and reduce spending on contracted security at city-run family shelters by 15 percent.

All of this occurs after the city shelter population increased by nearly 9 percent between 2005 and 2010.

"With unprecedented, escalating numbers of homeless families, rising rent burdens along with deepening unemployment and recession incomes -- even growing rent arrears in [New York City Housing Authority] public housing where rents are affordable -- it doesn’t take a policy expert to question the severe cuts proposed for the DHS budget,” said Victor Bach, the director of housing research at the Community Service Society.

With that sentiment in mind, some city officials and advocates are gearing up to strike back. Several officials plan to make fighting the cuts to the city's homeless -- particularly slashes at services for youth and families -- their top priority this budget season, and they are using the mayor's own language as a weapon.

In 2005, Mayor Michael Bloomberg pledged he would reduce the homeless population, then at approximately 33,687, by two-thirds by 2009.

The mayor's pledge was punctuated by one of the worst recessions to hit the country in decades, spurring nine rounds of budget cuts, an unemployment rate above 9 percent and a foreclosure crisis that devastated parts of southern Queens and Brooklyn.

The day after Thanksgiving this year, the department had 36,654 people, including 8,259 families with children, in city shelters. The total homeless population using the city shelter system has decreased slightly since last winter -- when it reached a peak of more than 39,000.

While the recession has increased the shelter population, the economy has ripped holes in the city's budget. Despite the circumstances, newly minted Department of Homeless Services Commissioner Seth Diamond remains confident he can continue to fulfill the mayor's campaign promise.

"We are very aggressively working to reduce the population," Diamond told Gotham Gazette last week. "The overall census is down 5 percent in the past year."

"We are [reducing the budget] in a way that we think is creative," the commissioner explained.

One of those innovative methods, Diamond contends, would be to test putting different families with single mothers and children under five in the same unit. Diamond said each family would still have its own bedroom but would share a kitchen and bathroom. He argued the living situation would provide comfort and stability for families who can rely on each other for support.

Those in and out of the shelter system do not see it that way.

"I don't want to share rooms with anyone else," said Nieves back at the Auburn Family Shelter.

"Why would I want another family with me?" asked another woman at Auburn, who did not want her name used, as she walked her daughter to school.

Patrick Markee of the advocacy group Coalition for the Homeless said the city had adopted a similar policy in the 1980s. But the City Council eventually banned it.

"When the city used to shelter homeless families in doubled up arrangements, there were all sorts of problems: Children and adults getting sick, children going to the bathroom in tin cans because they are afraid," said Markee. "The City Council passed the law in the '90s to move away from those terrible and unhealthy conditions."

In order for the administration to test the plan, which the department would like to do at eight facilities with the potential of adding between 5 and 40 units per facility, the City Council would have to officially revise the law. Already, the department has an uphill battle.

“The law in question is in place to protect the health and safety of our city’s homeless families and children," said Councilmember Annabel Palma, the chair of the council's General Welfare Committee. "I do not want to see us, as a city, move in the wrong direction and roll back hard won reforms.”

Council Speaker Christine Quinn's office said the council would review the proposal, which would take effect during the next fiscal year, at the "appropriate time."

Beyond doubling up, the department plans to reduce broker fees from 15 percent to 12 percent for those who find housing for homeless families. Advocates question whether the reduction would provide less of an incentive for realtors to find homeless families permanent housing.

It also plans to provide a financial incentive for shelter providers to move families into permanent housing at a faster pace. Currently, providers start receiving a lower rate of pay after a family has been there for six months. To save money, the department will begin reducing pay after five months.

Several shelter providers refused to be interviewed for this story, fearing fallout from the department. Some did confirm to Gotham Gazette their overall concern for how these cuts would affect getting services, especially for families.

The department will cut its contracted security at the four family shelters it directly runs, like Auburn, by 15 percent.

According to the latest data from the Mayor's Office of Operations, critical incidents at family shelters have gone up 250 percent this fiscal year. Diamond attributed the increase to an expansion in the definition of "incidents" to include domestic violence.

"We are reducing [security] from a very high level to a high level," Diamond said. "At the end of the day, we still have to have safe and secure facilities."

Diamond's determination to keep services the same has not quelled concern among those using those services, like Chanel Daugherty.

The 32-year-old woman, who has seven children between the ages of 3 and 9, lost her home on Staten Island after a fire. Now she is at Auburn and is waiting to get a permanent placement from the city elsewhere.

She called the conditions inside the shelter system "terrible." The lack of heat leaves her kids shivering all night.

"I hope a change comes about," Daugherty said.

The homeless have taken hits outside of this department's budget.

Drawing the ire of advocates and officials, the Department of Youth and Community Development has proposed to eliminate all of its funding for outreach for homeless and runaway youth and reduce funding to its five youth drop-in centers. The total cut in fiscal year 2011 would be $569,000.

The city's loudest opponent of the proposal, Councilmember Lew Fidler, says it is downright hypocrisy.

"A lot of these 3,800 kids that are on our streets every night aren’t looking to be helped," said Fidler. "Someone has to be looking for them."

Several weeks before the citywide election last year, the mayor announced a commission to study lesbian, gay, bisexual and transgender runaway youth. The report came out this summer, Fidler said, and called for more shelter beds.

Now, Fidler said, they are cutting instead.

"Happy holidays, merry Christmas," Fidler said. "What could be crueler?"

In response, a spokesperson from the Department of Youth and Community Development argued that, up until now, funding for runaway and homeless youth has been spared.

Unlike the Department of Homeless Services proposal to double of families, this cut may not need City Council approval. In between fiscal years, the mayor can direct agencies to cut spending. Only new appropriations need council approval.

Nonetheless, the council kicks off its budget hearings on the entire mid-year plan today.