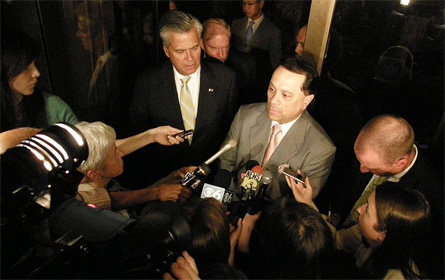 At midnight on June 15 the state's rent laws, which keep thousands of apartments across the city affordable, will expire.

Tenant advocates didn't want to be here. They put their energy into lobbying the legislature and Gov. Andrew Cuomo to ensure rent regulation would be renewed and strengthened as part of a budget deal. It seemed for a moment that it might work: a property tax cap to get the support of the Republican Senate and a renewal of rent laws for Assembly Democrats. Democratic senators, including Sen. Liz Krueger, said they might not be able to vote for the budget without a renewal of rent laws. Cuomo said a property tax cap and rent laws might both be part of the deal.

But as quickly as hope came, it was gone. The budget was passed, and rent laws had not been renewed.

The fear is not that rent laws will completely expire -- although it is a possibility -- but that the laws will not be strengthened. Instead, advocates fear the laws will be weakened so that more apartments are taken off rent regulated housing rolls.

Now tenant advocates feel they have been left with no bargaining chip and have to hope that Cuomo is committed enough to bolstering the rent regulation. Cuomo has expressed his support for strengthening rent laws, but, like with many of his other policy positions, he has not made it exactly clear what he wants and how he means to get it.

"I think it is up to the governor and what he is going to do," said Michael McKee, treasurer of Tenant's PAC. "He said he supports rent laws, but he hasn't given us any specifics. And he has given away the best leverage we had. I think he is absolutely key -- unless he has a specific plan we are going to wake up on June 16 and we will be screwed."

McKee has very little reason to be optimistic. The best hope for strengthening rent laws was when Democrats had control of both houses of the legislature.

Thanks to former Sen. Pedro Espada and his position as the chair of the housing committee, advocates saw their efforts to strengthen laws for tenants and to preserve affordable housing die. It wasn't a surprise for them when video was leaked this year showing Joe Strasberg, president of the pro-landlord Rent Stabilization Association, praising Espada.

"The guy who saved this industry was Pedro Espada," said Strasburg in a clip on YouTube, "and everybody makes fun of him because he's in litigation, but if it wasn't for him, this industry would have been hit on all those issues I just rattled off."

McKee wasn't shocked at all by Strasburg's comments. "Espada buried the chance over the last two years of getting stronger rent laws. He had some help, thanks to Carl Kruger and Jeff Klein," he said, adding that he felt Espada was basically "installed" as committee head by the real estate lobby.

And Strasberg's honesty about his relationship with Senate Republicans makes it even harder for McKee to believe that the Democratic majority in the Assembly can get rent laws strengthened without the support of the governor. "It's not that the Democrats are so great," said McKee. "It is that the Republicans are hopeless."

"We’re not ashamed of it. We gave and donated and supported all the Republicans,"said Strasberg on the YouTube video. "We basically emptied our piggy bank in order to make sure they capture the Senate. Dean Skelos understands how important we are as an industry -- and it's selfish -- but he understands clearly that if he doesn’t hurt us or he tries to avoid hurting us, we will be there for him next time around, two years from now."

According to McKee, it would be a win for the real estate lobby to have the rent laws re-approved as they are. But he expects Senate Republicans to try to draw the process out until the last minute and try to force the Assembly to accept a bill that actually weakens them.

"We cannot win by pressuring Republican senators. We can't count to 32 in the Senate. I think they will use the classic Republican strategy that Joe Bruno used: let the clock tick, people will get nervous and just before the deadline the Senate will pass a weakened bill, send it to the Assembly and leave town." The only alternative McKee sees to this is for Cuomo to exert his political might and push for a repeal of vacancy decontrol so that rent-controlled apartments aren't taken off the rolls.

Assemblyman Vito Lopez, a supporter of stronger rent laws, says he sees other options. "We have two out of three houses supporting stronger rent laws. We have the first governor to come out strongly for rent regulation and enhancements. Has he been specific? No. But we are in negotiations now on a property tax cap, ethics, and those may be coupled together to work out a compromise."

Some legislators say a push by tenant advocacy groups to include rent regulation in the budget was misguided. Now that the budget is out of the way, they need to redouble their efforts to make sure their concerns are heard while other key issues are being debated.

McKee said that he wants it to be clear to legislators that this is not an issue simply for current tenants; it is also an issue for future generations. "Preserving affordable housing is an issue for the future so that the next generation can afford to live in the city. When we lose an apartment to deregulation it is gone. It's not coming back."