To read and join the discussion on rent regulation go here. 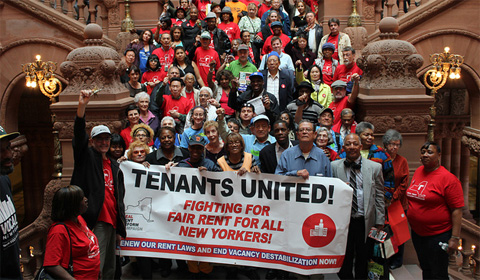 On Monday Sen. Bill Perkins and Assemblymember Jose Rivera were arrested with about a dozen fellow protestors as they marched on Gov. Andrew Cuomo's office.

On June 15 the laws that keep apartments affordable for millions of New Yorkers will expire. With Democrats pushing for stronger regulations and Republicans supporting a simple extension of the existing law, things seem to have come to a standstill. To further complicate matters, the issue has been tied to the passage of a cap on property taxes in most of the rest of the state.

With their affordable housing in jeopardy, tenants are hearing mixed messages from legislators and advocates.

On one hand, Republicans and some Democrats say tenants would feel little, if any, immediate effect if the law expired. Those Republicans and Democrats have different reasons for saying that. Democrats want time to work for a better bill; Republicans think the longer it takes to get a bill the more likely they will be able to simply renew the existing regulations rather than strengthen the law. With little time left in session, it is becoming apparent that Republicans do in fact have the upper hand in negotiations.

Other legislators -- many of them with particularly strong ties to tenant groups -- counter that missing the June 15 deadline could set off panic and prompt landlords to quickly raise rents on many homes.

Underlying the question of deadline lies a debate over what type of rent regulation New York should have.

"Is an on-time bill better than a stronger bill?" asked Democratic Sen. Liz Krueger, a major supporter of strengthening rent laws. "No. I would prefer to have the better bill."

A Question of Urgency

Over the weekend Republicans quietly introduced an extender that would keep rent laws in place until Friday -- Republicans want session to end on Friday despite Monday being scheduled as a legislative day. So far, neither the Assembly nor Cuomo has expressed support for te extender. Assembly Speaker Sheldon Silver said he hopes that a deal can be reached on the rents laws without any extender.

Senate Majority Leader Dean Skelos, whose conference opposes any tightening of rent laws, has insisted that it is not important whether the laws are renewed before the deadline.

On June 6 Senate Skelos told reporters there has so far only been "very, very preliminary discussions," about rent laws. "Nothing of real substance," he said before noting the deadline is June 15 -- "next Wednesday, that's an eternity away."

Sen. Adriano Espaillat called Skelos' comment that the laws need not be renewed before June 15, "tragic. I think it is like yelling 'Fire!' in a theater. It is almost like inciting a riot." Asked what would happen if the laws were not extended, Espaillat said, "We will be in uncharted waters. â€¦ I would say shark infested waters."

"I could not disagree more strongly with Sen. Skelos," said Sen. Gustavo Rivera, who says he has about 72,000 units of rent controlled housing in his district. "This is about millions of New Yorkers losing their homes, this is not something to be played with. This could have an impact of a crisis level on the state."

Rivera said he thinks any lapse in the laws would be felt immediately. "When you have a law that expires, it can no longer be implemented, so therefore you have landlords who can move forward without the protections rent regulation allows. They can start kicking people out, raising rent. When you have a family that is barely able to make it and all of a sudden they are asked to pay twice, three times their rent, which is no longer regulated because the roof has come off, what happens?"

Krueger disagrees. She said she doubts many leases expire on June 15, and even if they did, when an agreement on rent laws is reached any regulation could be made retroactive.

Tenant advocates like Michael McKee, treasurer for Tenants PAC, are advising people not to panic, "We have been here before; people forget that the laws expired in 1997. They lapsed for five days and the sky did not fall; they passed it retroactively," said McKee.

McKee thinks Skelos wants to get tenants worked up and frightened so that they will demand that Democratic legislators simply accept a straightforward renewal, without any stronger protections for tenants. The real estate industry, which is close to the Senate Republicans, wants a straightforward extension -- nothing more.

Upstate Sen. Catharine Young, who chairs the housing committee, told NY1 that the changes Democrats want would amount to "giving special privileges, benefits and enrichments to very wealthy people." Young has sponsored legislation that would weaken the current rent laws.

McKee and tenant advocates as well as Democratic legislators from the city don't want to settle for simple renewal. Most importantly they want to make it more difficult for landlords to remove apartments from the rent control system.

"We need the laws strengthened, we need to end vacancy decontrol, step up enforcement so that landlords can just stop registering and say they spent the money and raise the rent so the apartment is no longer on the rolls," McKee said. "Who knows how many apartments we have lost to fraud."

Currently, landlords remove their apartments from regulation by claiming they have invested in major improvements. McKee says the law does not require any confirmation that the upgrades have been made.

"If all they do is renew it and raise the cap a little, we will scream bloody murder," says McKee. "We will not be nice if that is all they do-- especially because not one has talked to us."

Gov. Andrew Cuomo has insisted he is for stronger rent laws, but he has refused to publicly state specifically what he supports. Espaillat said Cuomo had assured him that the governor fully supports extending and strengthening the laws.

Last week black and Hispanic lawmakers criticized Cuomo for skipping a tenants rally in the city. Cuomo responded by recording a robocall encouraging tenants to call their lawmakers and tell them to support renewing and strengthening rent laws. It isn't clear which legislators were targeted with the calls.

This, though. did not exactly satisfy the disgruntled lawmakers. They say Cuomo could have dealt with rent regulation earlier in the year and are annoyed that he did not make it a priority during his state tour.

Tenant advocates say that with less than a week left in the session, Cuomo has very few remaining chances to establish credibility as a Democrat who supports progressive causes. They say his reputation as a Democrat relies on the passage of marriage equality and rent laws. However, this week passage of same-sex marriage seems much more likely, and some advocates and legislators worry that Cuomo may feel that a win on that will be enough to satisfy Democrats.

City legislators privately say will risk losing their support if Cuomo does not deliver on the rent issue. Given the the amount of popular approval, Cuomo enjoys a loss of backing from a handful of Democrats might have little effect. Nevertheless there are indicators that Cuomo takes rent control very seriously.

Earlier this month Cuomo, Skelos and Silver reportedly met with representatives of the real estate industry, including members of the Real Estate Board of New York and the Rent Stabilization Association. Representatives from REBNY and the RSA did not return calls for comment.

Tenant advocates have heard that Cuomo told industry people, "You have had your way for 18 years, and things are going to change."

Tenant advocates don't know what to make of that. "The reports were that the governor was very forceful," said McKee, "but we don’t know what that really means -- we haven't heard anything from the second floor [the governor's office], we have not been involved in negotiations."

Democratic legislators would have liked Cuomo to have acted on rent regulation earlier in the year when he could have used the budget as leverage.

Instead the issue has become tied up with the tax cap. The Republican-controlled senate has already passed Cuomo's version of the cap -- with no link to rent regulation -- but the Assembly refused to move on it. Last month Silver and Cuomo announced they had reached a deal that would enact a property tax cap that would remain in effect only as long as rent regulation stayed in place. Skelos was not pleased. Skelos has said that a putting a sunset date on the tax cap is a deal killer.

While his constituents clearly favor a cap, Skelos may privately wonder whether it is really the best way to deal with rising property taxes. "Who knows what Skelos wants?" said McKee, "They say he doesn't really want a cap-- he wants ... the Assembly to take the blame when it fails."

Krueger takes Skelos at face value. "There was some confusion earlier in the year, but Dean has been very firm that he wants this legislation. His house has passed it, and he wants the Assembly to do the same," she said.

Krueger says it does not matter that "at this point in time that I don’t think a tax cap is good public policy." People in the state seem to want one and she represents a district that has no stake in the issue."

But advocates whisper that Skelos is holding out for a bigger reward to strengthen rent laws. They note that the Republican majority has benefited greatly from the financial support of the real estate industry. McKee says the only thing that has done more to keep Senate Republicans in the majority over the last few decades is their ability to draw district lines.

"What Skelos wants the most is to keep his lines the same. He wants to keep being able to gerrymander; he wants to make sure there is no independent redistricting. It is the only way they will keep the majority," McKee said.

The effort to pass an independent redistricting bill has stalled in the Senate, as Skelos has insisted that a bill would be unconstitutional and that a constitutional amendment is necessary. Cuomo, meanwhile, has pledged to veto any lines that are drawn unfairly. It is impossible to say how -- or even if -- all of these issues are connected. But at this point in session, it seems unlikely that negotiations over any important legislation are entirely self contained.

With only a few days left Democratic legislators and progressive groups say Cuomo has to use his power to buck Skelos and pass a rent law that extends controls and dramatically strengthens the law to make it harder for landlords to deregulate apartments.