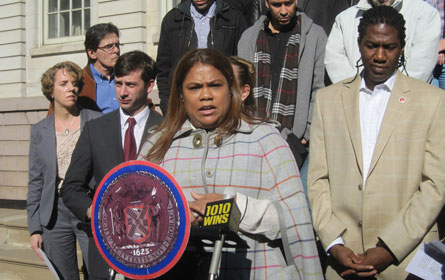 (UPDATE: On Nov. 10, the City Council released a letter from the state Office of Temporary and Disability Assistance saying it had not approved the change in the screening procedures for the shelter system. It also criticized the city for trying to implement the change so quickly and for not consulting with the New York State Supreme Court. For more on the letter, go here. And on the afternoon of Nov. 10 the city agreed to delay the rules pending a court hearing. For more on that, go here.)

Thirty years ago, under a court order, New York City, the state and homeless advocates agreed to a decree that has governed the treatment of homeless adults in the city ever since. Last week, the Bloomberg administration revealed that it would change those rules and create new requirements for single people seeking admission to New York City shelters.

At a press conference and a hearing yesterday, City Council members and advocates sharply attacked the city's plan. Under two hours of overwhelmingly hostile and sometimes combative questions Commissioner for Homeless Services Seth Diamonddefended the changes and tried to rebut council members who took issue with the general thrust of the city's policy on homelessness and the increase in the number of homeless people under this administration.

As the day drew to a close, the new policy remained set to go into effect on Monday. The Legal Aid Societyplanned to go to court today to stop the change, and some council members held out hope the state might intervene to block the Bloomberg administration's move.

All this occurred as the Coalition for the Homeless released another report saying homelessness in the city had climbed to a new record high. And it took place against a backdrop of anger among many council members and social service advocates about the administration's widely perceived failure in combating homelessness.

"Rather than addressing the real issue, which is housing, the mayor has chosen to shut the front door of the shelter system" to the mentally ill and other vulnerable New Yorkers, Mary Brosnahan, executive director of the Coalition for the Homeless, said at a press conference. "For the first time in New York City's modern history, we have no housing program for homeless individuals."

Under the new rules, the city would set stricter eligibility standards for entering the shelter system, changing the policy of the past three decades. An intake interview that now takes 45 minutes could run as long as two hours, according to the department.

In particular the policy will require people to detail where they have stayed over the past year in the hopes of determining, as Diamond told City Council Wednesday, whether they have another viable place to live. If they do, the city could deny them a bed in a shelter.

The system could result in one out of every 10 single adults seeking access to city shelters being denied it, Patrick Markee of the Coalition for the Homeless testified.

The new procedures, Diamond made clear, will aim to keep people out of the shelter system and in the community. It is, he said, "consistent with preserving precious resources for people who have no alternative."

Diamond estimated the change would save some $4 million -- even taking into account additional staff hired, at a cost of about $2 million, to conduct the more vigorous screening. He denied though, that that was the primary motivation.

"We didn't do it for the savings," he said. "We did it because we believe that people who have other options should explore those options."

Council members and advocates, though, fear that "exploration" -â€“ and forcing people to provide an accounting of their whereabouts -- could deter many homeless people, particularly those with mental illness or substance addiction, from seeking shelter. That, they said, would add to the ranks of homeless people sleeping on the streets as winter approaches.

They also expressed concern about how the city would determine that the person had another place to go. Council members repeatedly pressed Diamond on the specifics of what would make a place appropriate housing. Did it have to have a bed for the homeless person. A bedroom? What if the people do not get along?

He refused to respond to hypothetical cases, said "If at the end of the day, there's not space, there's violence involved, it’s not a viable option."

What though, Councilmember Stephen Levin wondered, if a family simply does not want the person living with them.

"Brothers should take care of each other," Diamond said.

Probably no one would disagree with that in the abstract. but many questioned how the city could force someone to take in another person, however in need of a place to sleep he or she might be. The effort to compel people to offer their home to another person "is a basic infringement of the role of government into the decision making authority of a primary tenant," Christy Parque, executive director of Homeless Services United, a coalition of nonprofits serving the homeless, said in her testimony.

"Who is the city," Councilmember Jumaane Williams asked, "to tell someone you have no jurisdiction over who they should let people into their home?"

Diamond said the city decided to make the change because it found that of the single adults applying to the shelter system only 15 percent came from the streets. Many more were living with someone. In addition, he said, the city has had a similar policy for homeless families for 15 years, and he believes has proved largely successful.

Although Diamond did not say this explicitly, the Bloomberg administration in other instances has ascribed some of the increase in the shelter population to improvements it has made in the shelters. As Annabel Palma, chair of the city General Welfare Committee, put it, city officials like to say people "flock" to shelters.She and other dismiss the idea that anyone would go to a shelter who did not have to. Going to a shelter is "a cry for help," said Parque. "It's a matter of poverty and a lack of affordable housing."

City Council Speaker Christine Quinn and others argue the family intake program has not been as successful as the administration claims. But even if the approach has worked for families, many say that does not mean it will work for single adults. Those involved with homelessness -- whatever their view on policy -- agree that homeless adults represent a more vulnerable population than members of homeless families.

The Department of Homeless Services estimated at the hearing that some 60 percent of homeless adults suffered from mental illness, had serious substance abuse problems or both.

It was that population who the Callahan decree aimed to protect. Coming out of case filed in 1979 on behalf of homeless men -- and bearing the name of a man who later died on the streets -- it provided a right to shelter for men who qualified for welfare or who were homeless "by reason of physical, mental or social dysfunction."

Legal Aid believes that the new city policy violates this decree. But Diamond challenged that contention saying any people denied shelter under the new rules were not technically homeless because they had a place â€“- albeit often not a place of their own â€“- to sleep.

Rather than neglecting the city's most vulnerable, he said, the policy will help them. It will seek to identify mental illness, he said. And it will provide assistance so people can stay in or move to alternative shelter â€“ helping find mediation for family disputes, pointing a family in direction of aid that might make it easier for them to take in their homeless relative and so on.

"No one wants to have an increase in people on the street," he said. "It's not or intention to make barrier for the chronic street homeless. They have no other options."

But Steve Banks of the Legal Aid Society said the process itself can create a barrier. "Bureaucracy can kill people," he said.

Councilmember Gale Brewer, said the policy points up what she sees as a blind spot in the Bloomberg administration. "This administration does not support, fund or understand mental health, she said.

On the Fast Track

Along with the substance of the decision, council members raised concerns about the way the administration made it. Many seemed irritated that they heard of the new rules, not from the administration, but from a report on WNBC Thursday night.

Quinn called that "curious." "When the Bloomberg administration has a policy they think is good, they usually call," she said. With this policy, which she branded "wrong-headed and mean-spirited," they did not.

Diamond said the city had provided two weeks notice, although under questioning, said a letter had gone out to Legal Services â€“ not the court involved or the council â€“ alerting them of the change last Thursday.

With two legal holidays this week (Election Day and Veterans Day), the council scrambled to hold an emergency hearing before the measure went into effect. Beyond that, though, it remains unclear what council can do to stop the move.

Some council members held out hope the state could intervene. Quinn said the council would review its options following the hearing..

The Rise in Homelessness

The outcry represents the latest chapter in a long string of disputes involving the Bloomberg administration and the homeless. After vowing to cut homelessness by two thirds, Mayor Michael Bloomberg has seen it increase on his watch. Diamond tried to spin the numbers, saying that family homelessness had declined from its peak and the rate of increase had slowed. He could not, though, refute figures showing homelessness among single adults has risen, and that homelessness overall has increased.

Under a relentless barrage of questioning from Williams, Diamond portrayed the administration as having made major gains in its treatment of homeless people, improving the family intake process, treating people with more compassion and building a new intake facility in the Bronx. His comments were greeted with smatterings of derisive laughter.

The Coalition for the Homeless report â€“- probably not coincidentally â€“ -only served to reinforce the arguments of his critics. It found that, as of Oct. 31, the shelter count reached 41,204. As for the record of this administration, it said that the total homeless shelter population is 33 percent higher than it was when Bloomberg took office with the number of homeless families 45 percent higher.

"At what point," Levin said at the press conference, "do you call it like it is and say these policies have been a failure?"