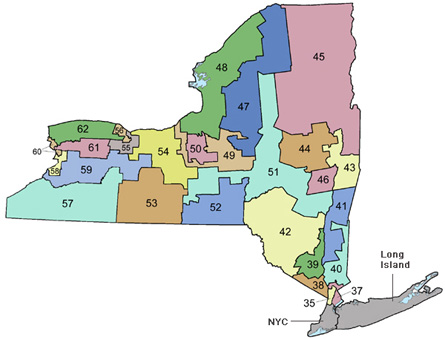 Republicans have reason to fear they will lose seats in the State Senate if an independent redistricting commission draws the new lines.

Independent redistricting isn't the sexiest issue in Albany. The creation of district lines every 10 years just doesn't grab as much attention as cuts to services that more obviously affect peoples' daily lives.

And yet redistricting is one of the major hot button topics facing legislators this year. Good government advocates and legislators in the minority party -- notably Senate Democrats -- have been pressing hard to take the drawing of district lines away from a group handpicked by legislators and give the task to a non-partisan group. The idea is that a non-partisan group would draw lines based not on how to get incumbent members reelected but on how best to represent communities.

The pressure has been mounting, owing to Gov. Andrew Cuomo, who has proposed legislation, and former Mayor Ed Koch, who gathered pledgesfrom legislators during the campaign season to support independent redistricting. Cuomo's bill would create independent redistricting -- and give a fair amount of power to the governor. Neither house has moved on it.

Yesterday, though, as good government groups stepped up their efforts to change redistricting, the State Senate approved a bill that would do just that -- but not for another decade.

An overwhelming majority of legislators have indicated their support for independent redistricting, according to a study released yesterday by Reshape New York, a campaign to fight for redistricting reform. Sixty of 62 current senators have signed a pledge, voted for a bill in committee or voiced their support for taking redistricting out of the hands of the legislature. One hundred and twenty-one members of the 150-member Assembly have spoken in support of reforming the process. Cuomo's legislation would basically achieve what good government groups and legislators have been pushing for.

Yet change is not guaranteed. There are only a few months left before it will simply be too late, and the old redistricting practice will be used for 2012 and the rest of the decade. Then it will be 2021 before there is another chance to see reform initiated and put into action. Assembly Democrats and Senate Republicans both issued their one-house budgets over the weekend, and both budgets contained funding for the Legislative Task Force on Demographic Research and Reapportionment -- the group that has traditionally redrawn district lines. In other words, neither majority is planning for an overhaul to the system.

What is the holdup?

It comes down to how one defines reform who might benefit from what changes.

For one, when Republicans in the Senate signed Koch's pledge during the campaign last year they were in the minority. Most members of the minority (whichever party that happens to be at the time) support redistricting reform because they know the majority party will use the current system to keep itself in power.

So now that the Republicans hold a narrow majority, they have been stonewalling on the issue. They still profess to support reform but say a constitutional amendment is necessary to change the current system. Such an amendment would need to be approved by two successive legislatures and face a public referendum. In other words, change could not happen in time to alter the process this time around.

Whatever one thinks of its merits, the Republicans' position, many observers say, is a matter of survival. By most counts, if district lines were drawn fairly, the overwhelmingly greater number of registered Democrats in the state would probably mean that Republicans would lose the majority for the foreseeable future.

Senate Republicans would rather let Koch and other painted as enemies of reform -- as the former mayor has said he will do if they stand in the way of ,independent redistricting -- so they introduced a bill of their own. Sponsored by Republican Sen. John Bonacic , it calls for a constitutional amendment to create a new body to draw district lines. On Monday, it made its way through the committee process.

Koch and his allies wrote letters and distributed memoranda decrying the Senate Republican bill as a stall tactic. Koch wrote that the legislation "would not apply for the current redistricting cycle to be completed next year and therefore would not meet the requirements of the New York Uprising pledge, which specifies that the reforms apply to the redistricting pursuant to the 2010 Census." (New York Uprising is Koch’s advocacy organization.)

Sen. Mike Gianaris put it more bluntly: "A proposal that doesn't take effect for 11 years is a dodge."

Citizens Union executive director Dick Dadey said the amendment was "unacceptable." He noted that besides not addressing redistricting this year the amendment would would undo a bill Democrats passed last year that counted inmates for redistricting purposes not where they were incarcerated but where they lived before they were jailed. That measure would put more voters in the Democratic city and fewer in the upstate rural districts, where most state prisons are, further reducing the number of GOP seats. Along with that, Dadey said, the amendment permit a district to be 5 percent larger or smalller than the average size, "allowing for political manipulation."

The bill passed by a vote of 35-24. The aye votes came from Republicans and four members of the Senate Independent Democratic Conference. One observer noted that the bill made it through the entire legislative process in the Senate -- committees, debate and a vote, while Cuomo's measure is still waiting for any sort of hearing.

Members of the Independent Democratic Caucus said they supported the amendment because, while it is not perfect, it achieves a goal Democrats had when they were in the majority and did not act on. Senate Democrats had all the opportunity in the world to pass legislation or an amendment while they were in power but did not. Sen. Liz Krueger reportedly accused on member of the independent Democrats of colluding with Republicans to kill other reform measures and get the amendment passed.

While many Senate Republicans insist that the only legal way to change the redistricting process is through a constitutional amendment, some Assembly Republicans, including Minority Leader Brian Kolb, said they support legislation that would address the issue for this year. Redistricting reform would not likely give Assembly Republicans a gigantic boost, but it would likely allow for more competitive districts upstate. Kolb said he would support Cuomo’s bill with some tweaks.

"I know that they say they would prefer to do it from a constitutional perspective, and I don’t disagree with that, it’s the preferred way to go," Kolb told the Times Union. "I think for this particular cycle only, we should try to get a non-partisan redistricting bill that I think will pass muster. Do I think it's possible? Yes, but that's only if everybody’s interested in making it happen."

High Stakes for the GOP

But will Senate Republicans sign what some see as their own death warrant?

Blair Horner of the Public Interest Research Group says that the notion that Republicans would be wiped out by independent redistricting is simply false. "Right now Democrats enjoy an enrollment advantage in a lot of Republican districts and yet the Republicans still control the Senate. The partisan argument doesn't hold water." Horner said Republicans, in some districts, would just have to run harder and raise more money than they do now.

As for how he is lobbying Republicans to support independent redistricting, Horner says it is fairly straightforward. "The argument is just a logical one," he said. "Cuomo promised to veto the lines if they don't pass independent redistricting. They can wait until next year to see if he vetoes the lines, and if there is no override, the courts would redraw the line. I argue it is more logical to start now than to have the court take this over and do it in a month’s time."

Cuomo's threat to veto any bill that does not create an independent redistricting commission is the key to this puzzle. With a veto, the courts are left to redraw district lines, leaving legislators at their mercy. But there is concern among some Senate Democrats that Cuomo may not follow through on his promise -- that perhaps the governor would deal with Republicans to come to some sort of a compromise rather than actually vetoing redistricting done under the old system.