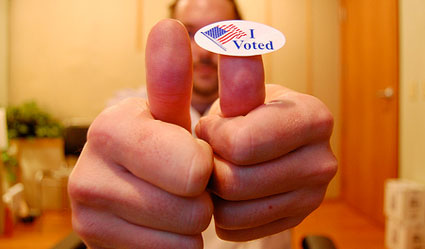 With change in the air as Americans watched the inauguration of a new president and the start of a new year, New York's leaders are setting their agendas for 2009. This month Gov. David Paterson delivered his first State of the State address, focusing on the economy and the challenges facing New York. Mayor Michael Bloomberg's State of the City also emphasized an economic recovery plan. Both executives spoke about education and infrastructure issues, as well as the tough choices government will have to make this year. What was clear in both of their addresses -- mostly from what Paterson and Bloomberg did not say -- is that during these difficult financial times reform will be left on the sidelines, particularly election changes that would make casting ballots easier and more secure for New Yorkers.

In November, Paterson asked New York Secretary of State Loraine Cortes-Vazquez to issue a report analyzing the 2008 election and highlight potential reforms that could increase voter participation. Cortes-Velazquez's report is set to be released in February. Despite the impending report and pleas from advocates, however, many wonder how much of a priority election reform will be for this administration. With a new year ahead, voting advocates and many voters have their own ideas about changes big and small that would make the election process more accountable, more secure and more accessible.

The excitement surrounding the 2008 elections caused record voter turnout nationwide. Voters headed to the polls early in states that allow people to cast ballots before Election Day. The rules for early voting vary from state to state and can range from allowing residents to cast absentee ballots without citing a reason to establishing early voting centers with voting machines.

In New York, state law allows absentee voting only by residents who are absent from the county or too ill to vote in person on Election Day. Despite that, New Yorkers, apparently unaware that early voting is not permitted here, headed to their borough election offices days before the Nov. 4 election to cast their ballots. The New York Times reported that between 50,000 and 60,000 absentee ballots had been received by Oct. 28, and some voters waited up to two hours at their borough office to obtain and cast an absentee ballot. Their votes were included with those cast in person on Election Day. In a press conference, Marcus Cederqvist, executive director of the city Board of Elections, speculated that stories from other states might have led New Yorkers to believe early voting was available here.

Voter advocates have begun pushing for a change in the New York State constitution and state law that would allow voters to cast ballots before Election Day using an absentee ballot without requiring the voter to provide an excuse. No-excuse absentee voting would increase the number of people who would vote in advance of the election and ultimately boost turnout.

Another election change aimed at making voting easier and more accessible to voters is Election Day registration, also know as same-day registration, which is currently allowed in nine states. Election Day registration lets voters both register and vote on the day of the election. In some states, voters are required to fill out an affidavit ballot, and after their eligibility has been verified, the vote is counted. In other states, voters register at a central location and then, on the same day, vote at their local polling place. Still others allow same-day voting if the voter casts a ballot before Election Day.

New York State offers none of these options. Instead people must register to vote at least 25 days prior to the election.

In New York, Assemblymember Michael Gianaris sponsored bill A. 4488 during the 2007-2008 legislative session, which would have amended state election law to implement Election Day registration. This bill has not been reintroduced yet for this session.

Those lobbying for the change cite New York's abysmal voter turnout rates as a key reason for implementing same-day registration. Opponents, on the other hand, argue that the process would be too costly, would create more work for election officials and, if improperly implemented, make elections more vulnerable to voter fraud. None of the nine states with Election Day registration, however, reports increased voting fraud.

Another election reform that has been receiving attention is universal registration. Under this practice, the government would compile a list of all citizens eligible to vote and use it as the official roster of voters. Anyone on the list would automatically be registered and would only have to show up on Election Day and vote. Lists would be compiled either from census records or by adding names from different municipal or state lists, like social service recipients or people registered with the Department of Motor Vehicles.

Proponents argue that universal registration would eliminate the problems voters encounter with not being on the rolls on Election Day and increase voter participation. A recent report from the Brennan Center for Justice entitled "Universal Voter Registration" examines the link between registration barriers and voter participation. At a recent City Council hearing, state Board of Elections commissioner Douglas Kellner said, "The concept is quite simple: Every citizen over 18 year of age, who is not incarcerated for a felony conviction and who has not been declared judicially incompetent should be entitled to vote. Period."

Even without bold changes such as these, voting advocates argue that steps can be taken to improve the election process in New York. Modernizing election agency Websites, improving hotline capacity, better training for poll workers and increased access to the polls for disabled voters are among the many changes advocated by organizations like the Brennan Center, Citizens Union, Common Cause/NY, New York Public Interest and Research Group, the League of Women Voters of New York, the Women's City Club of New York and Center for Independence of the Disabled.

For some though, these small-scale reforms -- and the slow or nonexistent progress of the state's election agencies and city and state elected officials to implement them -- signal a need for greater changes to the structure of New York's election administration. Citizens Union (whose sister organization, Citizens Union Foundation, publishes Gotham Gazette) plans to issue a report in the coming weeks that discusses the importance of reforming how elections are run and a departure from what it characterizes as the old way of voting.

While reforming elections in New York state may not top anyone's agenda, at least publicly, for 2009, voters and advocates will no doubt continue to tell their legislators "out with the old, in with the new" when it comes to voting procedures in the state.