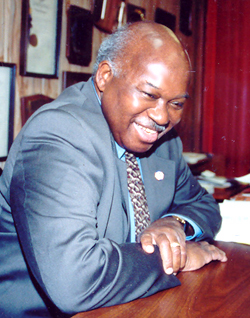 New York City politicians rarely get an opportunity to run for Congress with any real chance of winning. And so one can only imagine the hungry looks that greeted Major Owens’ announcement in 2003 that he would retire after the 2006 elections, after 12 terms in Congress. In January 2004, with the election almost three years away, the Capitol Hill newspaper Roll Call reported that Owens’ son Chris, State Senators Carl Andrews and John Sampson, City Councilmembers Tracy Boyland and Yvette Clarke, former City Councilmember Steve DiBrienza and Assemblymember Nick Perry â€“ all Democrats -- had expressed interest in the seat. Tracey Boyland and Yvette Clarke both did not want to wait for 2006, trying, without success, to defeat Major Owens in 2004. Since then, Boyland, along with Steven DiBrienza and John Sampson, have apparently have lost interest in the contest.

Five candidates remain, and more could drop out â€“ or join in â€“ before the September 12 primary.

But Roll Call did not include the candidate in the 11th District who has attracted the most attention, the most money â€“ and the most controversy: City Councilmember David Yassky.

Yassky, who until recently did not live in the 11th district, is the only white candidate in a district once represented by Shirley Chisholm, the first African American woman elected to Congress. He has also raised more money than any other Democratic candidate running for an open seat in the entire country â€“ $857,765 by March 31, according to the latest filings with the Federal Election Commission.

The controversy over David Yassky’s candidacy is emblematic of much of the debate leading up to the September primary. Although the five candidates have some disagreements on issues, the greater differences arise over emphasis and over who could do the best job representing the residents of parts of Bedford-Stuyvesant, Crown Heights, Prospect Heights, Park Slope and Flatbush.

“I think on at least 80 percent of the issues we agree,” Carl Andrews told the Sun.

The district is diverse, ranging from affluent areas of Park Slope to poorer areas of Crown Heights, with its mixture of Caribbean and Hassidic residents. The Atlantic Yards project falls in the district and only Chris Owens is on record as completely opposing the project, though some of the other candidates have called for changes in it or expressed reservations.

David Yassky, perhaps trying to impress residents with his knowledge of the nitty gritty of a district where, until recently, he has had not lived, says local issues can matter in the race. Commenting on the lack of decent stores in Brownsville, litter on Nostrand Avenue and parking shortages in Midwood, he said, “Voters don’t care whether you’re a congressman or a city councilman. They just want you to deal with their problems. And they have every right to that.”

But for the most part, the candidates focus on the national issues that they see affecting a district, which, even with its increased affluence, still has almost a quarter of its resident living below the poverty line. They cited education, health care and housing as key concerns, along with a need for economic development and more good jobs.

To address unemployment, Carl Andrews said he would try to place a moratorium on trade agreements that he thinks spur the outsourcing of jobs and would work for an increase in the federal minimum wage. Chris Owens wants to eliminate all federal taxes on small business that gross $1 million or less a year to help small businesses generate more jobs. All expressed skepticism about No Child Left Behind and want the federal government to help provide more affordable housing

As the only woman in the race, Yvette Clarke said she sees the race as being partly about “the challenges the women of the congressional district are facing with respect to welfare , with respect to the workforce and with respect to a number of issues from domestic violent to childcare that are not being addressed by the Republican Bush administration.”

The other candidates echo her criticism of the Bush administration, particularly of the war in Iraq. Along with the president’s tax cuts, Chris Owens, said, spending on the war “leaves less spending for the whole domestic agenda.” Chris Owens has called for Bush’s impeachment, and David Yassky advocated censure of the president.

But they have criticism for their own party as well. “The Democrats have not been effective in shaping the debate in a proper matter.” Yvette Clarke said. “We should have been much more definitive in our position around the Iraqi war.”

David Yassky said the Democrats could learn from Republicans. “Newt Gingrich when he was in the minority accomplished more than most Democrats because [the Republicans} had a clear. firm agenda that they fought for,” he said. “The problem with Democrats is they have not had the same level of clear, crisp substantive agenda.”

But the candidates expressed optimism about being able to change things â€“ even if the Republicans remain in the majority. Carl Andrews said his four years as a Democrat in the State Senate has given him experience in being a member of a legislative minority. “One of the things I’ve learned is that you don’t necessarily get your name on a lot of pieces of legislation but you can be involved in the discussion around those pieces of legislation and you can advocate.”

Chris Owens said he would begin his tenure by introducing his small business tax cut “since I’ve never met a Republican who didn’t like a tax cut.” And David Yassky said he would focus on being substantive. As an example he cited his record in the City Council where he worked to include affordable housing in the rezoning for Williamsburg and Greenpoint

Each candidate thinks that he or she brings something special to the race â€“ something that some or all of the opponents lack. Carl Andrews stresses his record, including work for Eliot Spitzer and time in the State Senate. Yvette Clarke cites her independence and, along with David Yassky, her record in the City Council. Chris Owens, whose only elected post was as a member of a community school board, notes his stands as an “aggressive progressive,” with a longtime commitment to such issues as same sex marriage, and his experience in the private sector. As a member of the state legislature for 14 years, Nick Perry said he is also the only candidate who served in the armed forces. “The district needs someone who is honest,” he said, “who comes with no cloud over them, someone who can make the district proud.”

Chris Owens’ opponents fault him a relative lack of electoral experience and for being the son of the long-time incumbent, although any criticim of Major Owens is muted. Chris Owens said he would not be a copy of his father. “Ideologically my father and I are very similar,” Chris Owens added. But he added he would be more savvy about fundraising and technology than the incumbent. And, tacitly acknowledging that Major Owens has been criticized for a lack of constituent service, his son said “I will definitely deliver the best customer service to the constituents of the district.

But no one else comes in for the kind of criticism that David Yassky does. Some observers think that as the only white facing a field of four blacks candidates in a district with a substantial white minority, David Yassky could win. At least in the blogosphere, David Yassky raised more alarms â€“ and some ridicule â€“ when he sent out a leaflet showing a matzoh and a ceremonial Passover goblet with the headline: “Ask the Fifth Question this Pesach: Are you ready for a congressman who actually gets thing done?” To add to the furor, it apparently went to more black residents of Crown Heights than Hasidic ones.

“He’s doing the smart opportunistic thing to do in politics. That doesn’t make it morally right,” Chris Owens said of David Yassky. If he hadn’t raised all that money “it wouldn’t be as objectional,” Chris Owens continued. “It’s the combination of class and race.”

“I don’t think his candidacy is reflective of the dreams and aspirations of the majority of the electorate in the 11th congressional,” Yvette Clarke said. “It’s clearly an opportunistic move.”

Nick Perry, though, thinks David Yassky may be hurting himself. “He was seen as a bright star with a future in Democratic politics in the city,” the assembly member said. But now he’s demonstrated an ambition that is “callous and selfish.”

David Yassky though has said that this whole controversy is of more concern to politicos than to voters, who want the best representation they can get. “This is such an opportunity for the people of Brooklyn to say that we’re all in this together and to talk and vote as Brooklynites and not as members of one group or another,” he told the Times. And, on a pod-cast, he likened the Pesach flyer to running an ad on a Spanish language radio station — something he said he would do as well.

He certainly has the money to. Carl Andrews, in second place in the money race, lags far behind with about $323,000, but said he has enough money to get his message out. Chris Owens falls a bit shy of $200,000 but said the pace has picked up lately, and Yvette Clarke with about $165,000 said her fundraising was delayed by her council campaign last year. Nick Perry is in last place with $109,0000 â€“ but offers an explanation that should earn him the empathy of many. “I love my work full-time,” he said, “so it’s been hard to spend the time needed for fundraising.”