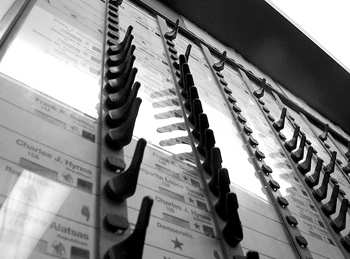 Connecticut voters had a nearly unique experience when Ned Lamont defeated incumbent United States Senator Joseph Lieberman in a Democratic primary earlier this month. The last time a long-time U.S. Senator was defeated in a Democratic primary, anywhere in the country, was back in 1974. This was also the last year that there was a switch in party majority for either the New York State Senate or the New York State Assembly. Unlike Connecticut, however, the State of New York almost surely will once again have a doubt-free fall.

Two big races are considered competitive in the primary on September 12th -- for Attorney General, and for the Congressional seat in Brooklyn vacated by Major Owens. Few New Yorkers are breathless in suspense over the races for U.S. Senator and New York’s governor, and victory in most of the state legislative “races” is already assured.

Over the past 16 years, New York has had few competitive primary election races, and fewer still that resulted in the unseating of an incumbent, with just three such instances in the past three elections. Even legislators with criminal charges don’t always lose their seats. “New York’s Next Legislator” would make a terribly boring reality show, though occasionally an interesting soap opera.

In September, though there are 26 seats in the State Senate representing New York City, there will be only nine primary races (seven Democrats, two Republican). Of 65 seats in the State Assembly representing New York City, only 20 primaries are planned (all but two of which are for the Democratic Party). These numbers keep declining as candidates are removed from the ballot at the last minute. This scant number of primaries is typical throughout the whole state. Less than one in five New York City voters registered with a major party will have a reason to go to the polls September 12th and even fewer will be confident that their vote could make any difference.

However, with low turnouts in Primary Elections, each of those votes could count even more.

Assembly 22 (Queens)—Julia Harrison vs. Terrence Park vs. Ellen Young (Democratic Party). Incumbent Jimmy Meng is leaving the seat due to health problems. His daughter Grace Meng was removed from the ballot after a residency requirement challenge.

Senate 24 (Staten Island)—Robert Helbock vs. Andrew Lanza (Republican Primary). Incumbent John Marchi is retiring from the seat. The winner of this contest will have to beat the Democratic challenger Matthew Titone in the fall to keep this seat Republican.

Queens has especially few contested primaries, a legacy of the careful planning of Tom Manton, the recently deceased head of the Queens County Democratic Association.

Democratic Primary -- 2 out of 7 races will hold a primary

Republican Primary -- 0 out of 7 races will hold a primary

General Election -- 4 out of 7 races are contested

Democratic Primary -- 3 out of 18 races will hold a primary

Republican Primary -- 1 our of 18 races will hold a primary

General Election -- 7 out of 18 races are contested

MORE OF THE SAME

Of course, incumbents may be doing their jobs well and earning the support of their constituents, but public opinion polls indicate otherwise. In a poll conducted by Siena College, just less than half of New York City respondents felt that their own legislators represented constituent interests as a priority, as opposed to special interests or their legislator’s self interest. Only 19 percent of those respondents believed that the leaders of the legislature primarily represent their constituents’ interests. And about half of New York City residents said they were dissatisfied with state government. Yet, an astonishing 98 percent of state legislators are re-elected.

Editorial boards and advocates believe that it is not constituent satisfaction that explains the lack of turnover, but that incumbents are too good at preserving their own jobs and thus artificially staying in power.

With a little planning and enough name recognition, an incumbent can overcome a criminal record, an obligatory resignation, and a strong potential challenger. In the 2000 Primary Election, Hakeem Jeffries challenged incumbent Roger Green (D-Brooklyn) and won a remarkable 40 percent of the vote. After the 2002 redistricting cycle, Jeffries’s house and a chunk of Prospect Heights were no longer part of the district. In 2004, Green pled guilty to petty larceny charges and later resigned. With Hakeem Jeffries unable to become a resident of the district and campaign in time, Roger Green won an unopposed 2004 Primary Election. Under the current system, criminals can boomerang back into office and promising challengers are stifled.

Incumbents also have the advantage of name recognition, networks, and the ability to send out newsletters and updates to their constituents.

Another problem is when various candidates are bumped off the ballot at the last minute, essentially clearing out swaths of the field after the planting but before the harvest. This summer, with mixed results and piles of legal fees, many senate and assembly candidates have had their petitions or residencies challenged. Whether frontrunners or on the fringe, members of this vanishing crop must devote time and money to defending their candidacies.

Incumbent Martin Connor (D-Senate 25), an election law specialist who served on the DSCC and worked for Tom Golisano’s 2002 gubernatorial campaign, filed a ballot access charge of his own against his challenger Diamondstone. The Board of Elections ruled against Diamondstone’s claim of residency, but he subsequently succeeded in an appeal to the Supreme Court of New York and is back on the ballot as of mid-August. Connors is appealing that decision though, so the Diamondstone campaign continues to languish as legal proceedings continue. A challenger has a difficult enough time campaigning against an incumbent, and its all the more difficult when you are getting knocked off the ballot.

Juan Pagan, a Democratic candidate for Assembly District 74 had to defend his petitions against a challenge. He submitted the routine 1,000 signatures (twice the minimum to assure compliance), but after the challenge, the board of elections threw out half the signatures, thus putting his candidacy in jeopardy. He successfully defended the signatures in the Supreme Court of New York. A press release issued by his campaign states that the court found the objections, such as the use of the middle initial “J.” on one page and the full name “John” on another, were inconsequential, and the petition forms were “inherently oblique and confusing.” Pagan is back on the ballot, but has lost resources and time devoted to fighting for the validity of his signatures.

For Assembly District 22, this leaves behind Ellen Young, Shirley Huntley and Julia Harrison. Harrison may be best known for her comments as a city council member characterizing the increase in Asian constituents in her district as an “invasion, not assimilation.” With two of the best funded and best known candidates out of the race, Ellen Young’s well financed campaign is more secure. Candidates who would have run but were intimidated by Meng’s name recognition and legacy did not get into the race. Likewise, contributions to Meng’s campaign could have gone elsewhere, and Terrence Park had to invest time and other resources into fighting for his candidacy.

Assembly District 74 has an incumbent, Sylvia Friedman elected in the Special Election. Friedman has the security of incumbency, but Brian Kavanagh, who ran for City Council last year, has raised twice as much money as she has.

Are nonpartisan elections a viable option? These are not often discussed at the state level.

In 2003, Mayor Michael Bloomberg pushed for nonpartisan primary elections. This failed campaign was somewhat controversial. The proposal was seen as a

Perhaps the most compelling pitch would be an Instant Runoff Voting (IRV) system. This method of preferential voting is currently employed by the Academy Awards.

With candidate rankings, the relationship between voters and their representatives changes. The voter would be able to rank candidates in order of preference, so that even if his or her top choice may lose, the second and third choices still count.

-guarantee that in elections with more than two candidates, the victor will win 50% or more of the vote
-eliminate the cost and confusion of runoff elections for voters, candidates and the board of elections
-decrease the deleterious effects of “spoiler” candidates on frontrunners, and allows voters who vote for the fringe candidates to have their preferences still matter in the race
-reduce negative campaigning (and gratuitous ballot challenges) because candidates will likely need positive rankings from an array of voters to win.

If the system is good enough for the Oscars, then it could be good enough for New York State, though critics claim it may be too complicated. Recently, North Carolina implemented IRV and the Minneapolis City Council voted to put the issue on the November ballot.

A few elected officials in New York are advocating for implementing IRV. A bipartisan bill (Assembly Bill A3510/Senate Bill S1671) to test IRV in selected local elections and ultimately around the state is alive, but continues to sit in the Election Law Committee with few cosponsors.

Redistricting reform: Currently, redistricting is a partisan process where the Legislature is very much involved in the drawing of district lines. In the confines of a single bill, the Republican-led Senate and Democrat-led Assembly pass each others plans to preserve their own majorities, which have been intact for decades. The resulting district plans tend to favor incumbents and pass without complaint from the Governor. This system maintains the status quo, artificially protects incumbents and decreases the ability for outsiders to break into the inner circle.

Proposals for an independent commission would add a degree of separation between the legislature and the apportionment of their constituents. With proper implementation, this reform could help crack the concentration of power that the Senate leader, Assembly leader and the Governor have in state government. All the gubernatorial candidates have made this a priority in their campaigns and bills are active in both the Senate and Assembly.

New York State primary elections have the potential to be more compelling for voters and candidates alike, whether this is achieved through redistricting, better campaign finance rules and practices, reform of ballot access, or a complete overhaul of the voting system.