In Mayor Michael Bloomberg’s view “This is a great time for New York an encouraging, optimistic time” when our “magnificent city” faces a future of limitless promise.”

No doubt Council Speaker Christine Quinn loves New York too. But her State of the City portrayed a slightly different city than the one the mayor described in his annual address last month. In her address on Thursday, Quinn spoke of those New Yorkers who are not cashing in on the economic boom. “President John F. Kennedy said a rising tide lifts all boats,” Quinn said. “But I’m worried that if we don’t do something, this rising tide is going to push a lot of boats right out into the Atlantic Ocean.”

While Bloomberg and Quinn have by all accounts forged an amicable working relationship in the year that she has been speaker, Quinn took advantage of the pageantry and pomp of the State of the City to distance herself from the mayor’s education policies and to seek to take his tax and housing moves a step further.

Quinn’s speech ended the yearly winter ritual of “state of” speeches that began in New York with Governor Eliot Spitzer’s first State of the State speech in early January, and continued with President George W. Bush, the mayor and all five borough presidents. While the specifics may vary, the addresses â€“ from president of the United States to president of Staten Island â€“ have much in common: The speaker lavishes praise on allies and heroes, recites a litany of accomplishments and then rattles off a list of plans for the coming year. But as the tacit dispute between Bloomberg and Quinn indicates, underneath the salutes to hometown heroes and rhetorical excesses, these speeches can feature serous policy proposals, accords and disagreement.

After being introduced by her father Daniel Quinn before a packed council chamber, Speaker Quinn went on to praise Bloomberg and to single out dozens of individual City Council members by name. But as the speech went along, the differences between her and the mayor emerged.

While Bloomberg addressed the problems poor New Yorkers in his speech â€“ and in the anti-poverty proposals announced last year â€“ he paid little attention to the middle-income city residents who were the focus of much of Quinn’s address. “There is a growing sense across the boroughs that the day s coming when the men and women who protect us, who teach our children, who take care of our parents and who serve our coffee won’t be able to afford to live in New York City,” Quinn said.

In his State of the City Bloomberg proposed a reduction in the property tax rate, which would benefit homeowners. These were, he said, “the New Yorkers who made sure that the city's recovery from 9/11 exceeded our wildest dreams and who we want to continue living, working, and investing in New York.”

For her part, Quinn wants a $300 credit for renters. “Two-thirds of our residents rent their homes, and for too long they’ve been forgotten and ignored when it comes to tax relief,” she said. Quinn called for the state to return responsibility for rent control to the city, for laws to protect tenants from harassment by landlords, and for the city to repair buildings when landlords will not and then charge landlords for the work. She would also like to see the city expand a program that provides financial hope to people trying to make a town payment on their first home.

The mayor’s office has been noncommittal on the tax credit but said it would work with the City Council on may to boost hone ownership.

Bloomberg’s State of the City set out yet another reorganization of the school system the mayor took over and reorganized during his first term. But Quinn chided the mayor for rushing headlong into the latest program without more consultation. “What the Department of Education is doing to involve and inform parents just isn’t working,” Quinn said. “Parents are sometimes confused, frustrated or too angry because they don’t know where to turn for help.”

Here too the mayor indicated he would work with the City Council but there is room for skepticism. Virtually since mayoral control became a reality, Bloomberg and the Department of Education have been reluctant to consult City Council on changes in the public school system, preferring to go ahead with its plans, whatever they might be and explain them to a sometimes irate education committee later on.

Some saw Quinn’s speech as presenting a not so hidden agenda. Commenting that the speech “sounded as much like a blueprint for a potential mayoral campaign as an outline of her agenda for the coming months,” Diane Cardwell wrote in the New York Times that the speaker’s initiatives came in the “major areas that opinion polls suggest voters care most about.”

George Washington delivered the first state of the union speech on January 8, 1790. In it, he hailed North Carolina’s signing of the Constitution, called for a “uniform and well-digested plan” to make the country self-sufficient in military supplies, and said the nation should encourage “the introduction of new and useful inventions from abroad.”

The U.S. Constitution requires that the president “shall from time to time give to Congress information of the State of the Union and recommend to their Consideration such measures as he shall judge necessary and expedient." Over the years and with the advent of television, it has acquired a series of rituals: the stentorian introduction, careful counting of the length and frequency of interruptions for applause and a televised response by an opposing politician (this year freshman Senator James Webb of Virginia).

Before the 2007 State of the Union speech, commentators saw it as one of President George W. Bush’s last chances to redeem his foundering presidency. “Bush arrived at the Capitol at his lowest point in public-opinion polls, facing new Democratic majorities in the House and Senate and lame-duck status,” wrote Dan Balz in the Washington Post. Afterward many thought Bush had failed, or as John Dickerson put it in Slate, “he did nothing in his speech to change the political dynamic.

STATE OF THE BOROUGHS

The stakes for Helen Marshall or James Molinaro are probably not so high. And given the limited clout of borough presidents, one can easily dismiss their speeches as Andrew Wolfe did in 2003. “Since the charter revision of the late 1980s, the city’s five borough presidents have had little power and even less to do, “ Wolfe wrote. “That’s probably why they have seized on gimmicks like holding an annual â€State of the Borough’ address.” 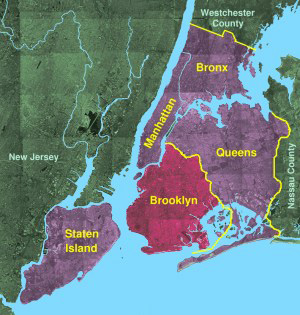 Manhattan Borough President Scott Stringer confronted that attitude head on. “I promised to take the office of borough president, an agency many viewed as powerless, and use it to empower every Manhattan neighborhood,” Stringer said in his first state of the borough speech. “Some people smirked when I said that, but I don’t think they’re laughing anymore.” He went on to describe his ongoing effort to give more clout to the borough’s community boards.

A Record of Accomplishment

In general, the presidents laud the great progress their borough has made â€“ “the Bronx is back,” Bronx borough president Adolfo Carrion intoned more than once â€“ in public safety and well-being. They recite a list of jobs created and development projects completed. Helen Marshall of Queens hailed the Rockaway as Hamptons West, but “more convenient and affordable than the Hamptons,” while Carrion touted “520,000 square feet of shiny new office space at the Hutchinson Metro Center.” Brooklyn’s Marty Markowitz praised the mammoth Atlantic Yards project as “part of an even grander vision for Brooklyn” â€“ a statement that undoubtedly sent terror through some borough residents.

Building for the Future

Then they set out ways to make the good situation even better. Most wanted new schools â€“Markowitz envisioned a high school focusing on advertising and marketing for Brooklyn, while Staten Island Borough President James Molinaro saw his borough as particularly suited for a school focusing on health and the environment.

Many of Molinaro’s ideas have a nautical theme. He plans to install installation of two giant saltwater fish tanks, “home to 800 colorful fish,” in the waiting area of the ferry terminal and to establish a new children play park in South Beach with a carousel of seahorses and giant spinning clamshells.

Health and the Environment

Marshall of Queens focused on health care, saying that while New York City overall might have a surplus of medical facilities, many Queens residents still had to go to Manhattan for treatment.

And Adolfo Carrion of the Bronx put a particular emphasis on environmental protection. The borough already insists that all new building be constructed “with environmentally friendly material and [be] efficient in the use of energy, he said, and now the city needs to expand on that by giving manufacturers tax breaks for making environmentally sustainable products.

While many of the proposals, pronouncements and promises in one speech resembled those in the others, the borough presidents did stake out different and sometimes conflicting approaches to traffic congestion. Carrion and Marshall both want more and better transit in their boroughs, with Marshall calling on the Long Island Rail Road to “finally reopen the more than 20 stations closed in Queens.” But rather than get people out of their cars, Molinaro wants more roads and detailed a list of proposed turn lanes and other traffic moving measures.

Stringer would like even stronger measures to get people out of their vehicles. ““With federal funds available, we should seize the opportunity to study congestion pricing, he said. “This issue is too important to be held up by political expediency by elected officials’ time-honored fear of going out on a limb.”

But Marshall disagreed. “I believe without alternative mass transit already in place, congestion pricing will have an unintended negative impact on Queens and Brooklyn, she said, adding there are many other “opportunities to greatly reduce the volume of cars driving into Manhattan.”

With the mayor, Speaker Quinn and four of the five borough presidents all set to leave office at the end of 2009 because of term limits, it was hard to ignore politics in this year’s addresses.

Markowitz started his address by introducing two “calendar girls.” “Besides being easy on the eyes — I invited the lovely calendar girls as a reminder that I have three years left as borough president,” he said.”

After he went on to pledge fealty to his diet and his wife (“Jamie — I’m yours now, that’s what matters”), Markowitz ended by inviting speculation about what he might do when those three years are up. “what about my future?,” he asked. “I guess there’s only one way to find out: If it’s good for Brooklyn, it’s good for New York City!”

This cryptic statement prompted some to speculate that Markowitz might want, above all, to deliver the 2010 State of the City speech as mayor.