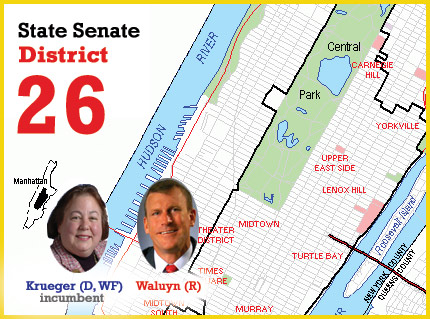 Democratic State Sen. Liz Krueger has faced some tough battles against Republican opponents in this district on Manhattan's Eastside. She narrowly lost to Republican incumbent Sen. Roy Goodman the first time she ran for the seat in 2000 and won a close contest for the post in February 2002.

The district was represented by a Republican for 30 years before Krueger took office, and still has a high number of Republicans -- about 25 percent -- compared to the rest of Manhattan.

Krueger did not face competitive elections in 2004 or 2006, but for a while it looked as though Republicans might mount a strong campaign this year in the person of Timothy Brown. A former firefighter, he was at the World Trade Center on Sept. 11, 2001, and walked out of the North Tower just five minutes before it collapsed. The New York Post story on his candidacy bore the headline, "9/11 Hero Joins State Senate Race." After the attacks, Brown, a leader in emergency response efforts, developed a relationship with former Mayor Rudolph Giuliani and worked on GiulianiĂ­s campaign. Many of BrownĂ­s campaign donations came from former Giuliani staffers and fundraisers, and he reportedly received strategic advice from GiulianiĂ­s former chief of staff, Tony Carbonetti.

Brown also received $50,000 from the State Senate Republican Campaign Committee, a high amount considering he is a challenging an incumbent in his first run for office. The committee, until this summer, was largely run by other former Giuliani staffers like Matthew Mahoney. But then Mahoney, a former senior advisor for GiulianiĂ­s presidential campaign, was demoted and other Giuliani staffers quit their campaign committee posts after the shake-up. Press accounts said some state Republicans suspected Mahoney was more interested in promoting Giuliani for governor than helping the GOP hold on to its edge in the Senate.

Whether or not the committee shake-up is an indicator, Brown's campaign has been relatively quiet recently. Krueger said of Brown, "If he's waiting to come on strong at the end, he's pushing it a little close to the deadline for himself." The New York Press, in endorsing Krueger, called Brown "a challenger who appears to be just a name on a ballot." Brown's campaign did not respond to requests for an interview.

Krueger, who worked on poverty issues before her election, has risen in the Democratic leadership and is seen as a strong proponent of efforts to reform state government. She has also been active on housing and health care.