The campaigns for presidential nominations have been close this year, but for many New York State voters, the hardest thing about elections isn't in keeping up with the latest political gossip or even deciding between the candidates. Rather, just casting a ballot can be the most difficult part of voting for some of the three million disabled citizens in New York State.

The passage of the Help America Vote Act (HAVA) should have been a triumph for these New Yorkers. Passed in 2002, it mandated that every poll site have at least one accessible voting machine, and that every poll site be handicapped-accessible by January 1, 2006. Yet, slow progress of New York State's implementation of the law and selection of new voting machines has delayed the advances HAVA offered disabled voters. This fall's primary and general elections will mark the first time in the state that disabled voters will be able to vote privately and independently, without the help of a friend or poll worker. 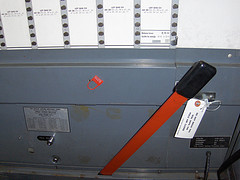 The first lever machine was used in New York state in 1892, but they do not accommodate handicapped voters and are thus considered not to comply with federal law HAVA. In place of the levers, the counties of New York must now choose between optical scanning machines-and their ballot marking device (BMD) companions-and direct recording electronic (DRE) machines.

Optical scan voting systems count and tabulate the vote from paper ballots marked by the voter. DRE machines operate using a touch screen that allows the voter to make their selections, much like an ATM.

Under HAVA, New York was required to provide at least one accessible voting machine in each poll site by 2006. The State Board of Elections has yet to complete the process of certifying voting machines, needed in order for county offices to purchase and implement the new voting systems across the state. As a result of this inaction the U.S. Department of Justice sued the state in 2006 for non-compliance and ordered it to institute an interim plan to avoid disenfranchising handicapped voters while testing and certification of new voting machines was completed. The interim plan, in place since 2006, allowed for one location in each borough to be equipped with BMDs on election days.

In November 2007, the U.S. District Court overseeing the ongoing lawsuit required the State Board of Elections to come up with a revised plan for implementing HAVA. Gridlocked and unable to agree, Republican and the Democrat commissioners submitted separate proposals. Both parties called for one BMD to be placed in each poll site by September 2008, while voters not requiring the devices would continue to use the lever machines. The Democrats, though, called for implementation of a completely new voting system by 2009, as the Republicans set no timetable for full implementation of the new system.

The court order gave the elections board one last chance to reach an agreement and move forward toward replacing the state's old lever voting machines. In early January, the board submitted a plan to place one BMD at each poll site by this September and completely replace the lever machines by 2009.

On January 23, the State Board of Elections released a list of approved ballot marking devices from which each county must select the ones it purchases. Three ballot marking devices were approved: the Sequoia Image Cast, ES&S Automark and Premier Automark - all of which used paper ballots, and would be read by optical scanners or counted by hand. The two Automarks were approved on the condition of required adjustments.

Two weeks later the board rescinded its approval of the two Automark systems in a split vote. By that time Liberty, the vendor that proposed the use of its DRE machine as possible option for a ballot-marking device, had already sued the Board of Elections for not including them in the initial list.

This month, a judge ordered that the Liberty DRE machine be included in the board's initial list of approved ballot marking devices. Not long after, ES&S and Premier were also ordered back on the list just in time for counties to make their selections of BMDs on February 8.

Around the state an overwhelming majority of counties opted to purchase the Sequoia Image Cast. The machine has yet to be used in the United States. Three other counties-Albany, Schenectady and Rockland-will go with the Premier Automark. Hamilton County was the only one in the state that selected to purchase the Liberty DRE.

What Can They Do?

Ballot marking devices (BMD) are used to allow disabled voters to mark paper ballots independently and privately. BMDs do not count votes. They simply mark a voter's ballot, which is then transported through a "privacy sleeve" to the poll site's scanner or box. This year poll sites will deliver those ballots to their borough office to be counted along with other paper ballots such as, absentee, emergency ballots, affidavit ballots and military ballots.

To use a BMD a voter can listen to the options through an audio recording with headphones, or view the options on a touch-screen, which somewhat resembles an ATM screen. There are a number of different ways to for voters to make their selections, and the BMD is designed to accommodate variety of disabilities. For example, voters with visual impairments can use features that allow the contests on the screen to be enlarged or view using a two-tone display. Headphones can also be plugged into the device, and voters can listen to the ballot choices, making their selections using a Braille keypad. Voters with limited mobility can identify their selection using a sip and puff device, rocker paddles.

Those viewing the options on the screen can make their selections using any of devices mentioned above or can use the touch-screen itself. The machine can also accommodate voters with limited English proficiency. It can display ballot races in the languages required in some jurisdictions by federal law, which include Chinese, Korean, and Spanish in parts of New York City. Audio recordings of the ballot in these languages can also be recorded to allow visually impaired voters the opportunity to vote in the language of their choice. At the end of the process, the voter can review his ballot aurally, through an audio device, or visually, by printing out the ballot.

This year, disabled voters will be able to use the devices in their own polling sites for the first time. All other voters will cast their ballots on the lever voting machines, which will still be employed in 2008.

It Takes More Than Machines

Although ballot-marking devices are a huge advance toward enfranchising disabled voters, purchasing the machines is only the first step. Voter and poll worker education is also imperative as New York City makes the transition to a new way of voting. Poll workers will be required become intimately understand ballot marking devices and long term solution voting machines over the next two years, and their ability to operate and demonstrate new voting technologies will be crucial. Furthermore, all voters will also need to be adequately prepared for what these changes will mean for them as they enter their poll sites this fall and next year.

"The State Board of Elections needs to have information about BMDs available in an accessible format. There needs to be materials available in large print and Braille," said Aaron Belisle, voter education and access coordinator at the Center for Independence of the Disabled, NY. For now, though, he notes, that the PDF format the city Board of Elections Web site uses is not compatible with screen-reading software. By getting information out to voters about the new ballot marking devices and their proper usage, the City BOE can work to prevent confusion at the polls amongst disabled and non-disabled voters alike.