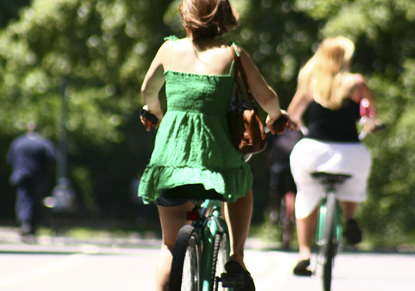 There are at least four excellent reasons to write about biking in the city this month.

First, May is National Bike Month, which is an ideal reminder that New York is a great city for cycling. Most of the city is flat, almost all of our trips are short (according to the bike experts at Transportation Alternatives, 95 percent of our commuting, shopping and other trips are less than five miles), and the climate is pretty great for cycling much of the year.

Second, now that congestion pricing has taken its place as merely one of 127 sustainability initiatives within the broader PlaNYC, it's time to think about how cycling can improve the city's congestion situation now - and how it can help create a more sustainable transportation system in the future.

Third, this is the best time of year to ride a bike to work in New York. Daylight lasts long enough to ensure that bike commuters get home before sunset. The weather is ideal for riding, neither too hot nor too cold. And the summer smog season hasn't begun yet.

Lastly, $4 a gallon gasoline. Is there a better hedge against high gasoline prices (and yes, against future subway fare hikes and service cuts?) than riding a bike?

More people are riding bikes to work than ever before. In fact, the city's Department of Transportation estimates that commuter cycling has grown by 77 percent since 2000. A quick rush-hour walk on the Brooklyn Bridge or the Hudson River Park's bike path confirms this to even a casual observer. Still, less than 1 percent of New York's commuters get to work on a bicycle. The city hopes to double this by 2015 and to triple it by 2020.

A Plan to Increase Cycling

In its recent "Sustainable Streets" plan, the transportation department outlined its strategy to increase cycling throughout the five boroughs.

In short, the department plans to create more - and better - cycling infrastructure to make biking safer. In the short run, that includes plans to build 200 new lane-miles of bike routes by 2009 and 15 miles of protected bike lanes by 2010 (see, e.g., the Ninth Avenue Bicycle Path). So far, 90 miles have been built, so the city seems to be on track. In the long run, the department expects to complete an 1,800-mile network of bike routes.

Of course, getting to work is only half the problem. Bike commuters need to store their bikes safely once they arrive. So, the department plans to install 37 bike parking shelters and 5,000 new "CityRacks" by 2011. It will also seek legislation to expand indoor bike parking and pass zoning changes to require that builders include bicycle parking in new construction.

Arguably, even parts of the Sustainable Street program aimed at other types of transportation will help make cycling safer and more pleasurable. Creating a network of bus-rapid transit lines, for example, will help reduce congestion - and create more road space for cyclists. Better management of curb space through expanding the use of muni-meters and better parking enforcement will create a better cycling environment. Traffic calming and redesigned streets (for examples, check out Ninth Street and Lafayette Avenue) benefit cyclists as much as pedestrians. Investing in better management of road projects and improving the quality of street surfaces will make cycling a less-jarring experience in many neighborhoods. Implementing a program of weekend car-free streets and reducing car use in Central and Prospect Parks will help generate a more bike-friendly environment for cycling throughout the week.

In other words, from a cyclist's perspective, the Department of Transportation's strategic plan easily outstrips anything that has ever been proposed by a New York City agency before, and should help make New York City a more bike-friendly city.

Even with all of this, though, New York will not be confused with Amsterdam, Copenhagen, Paris or Beijing anytime soon. Amsterdam has its bike lanes, Copenhagen and Helsinki have free bikes everywhere, Paris has its VĂ©lib network of 10,000 bikes for cheap rent at 750 locations around the city, and Beijing is still home to millions of bike commuters, even as car ownership soars.

There are a few ways that New York City could provide a better environment for its future bike commuters.

First, Transportation Alternatives, the city's leading advocates for pedestrians and bicyclists, believes the administration can speed up the program. Even with current rates of progress, the group believes that the city can cut traffic fatalities in half, complete the full bike network, and "traffic-calm" the key streets around schools by 2015.

Second, to really ramp up biking in the city, there needs to be an easy way for bicyclists to use the transit system. Although you can bring a bicycle onto a subway car, any rush hour commuter knows it isn't easy to do so - for cyclists or non-cyclists. You can't take a non-folding bike aboard any bus, and folding bikes are accepted on local and limited buses but not express buses. Wouldn't it be great, though, to ride an express bus into Manhattan, and then use a folding bike to get around Downtown or Midtown? Plus, unlike some other cities, our buses don't have bike racks. As for Metro-North and the Long Island Rail Road, their policies seem designed to keep bicycles off trains during the work week: No bikes during commuting hours, a permit is needed and there's a limit of four bikes per train.

Third, a European-style network of free or cheap bikes everywhere is not yet on Mayor Michael Bloomberg's to-do list. But with crime down, safety up, and bike routes everywhere, could that be part of a bike-friendly platform for the next mayor?