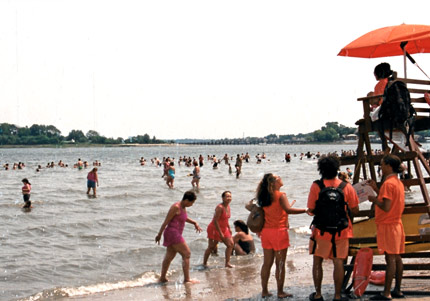 Coney Island Roller Coaster:
The fight over how to develop the famed beach continues.

On a bright sweaty weekday in mid-July, some of the suits making a morning commute on the N train were bathing suits.

No day in a cubicle for these subway riders. For the nearly 1,200 workers who sit in the sand and are charged with overseeing New Yorkers' aquatic safety, lifeguarding can be the ideal summer employment.

"At the pool you see the same people every day," said Coney Island lifeguard Mike Zuska, a 20-year-old student at Kingsborough College who also lifeguards there every semester. "Here you get tan, you get paid better, and there are tons of women."

In recent years, a shortage of lifeguards on city beaches has led to sands dotted with red flags -- the disappointing symbol that a beach is off limits for swimming. This year, though, city officials say they are far closer to reaching their recruitment and employment goals of filling 1,200 positions. Thanks to greater public outreach and a salary boost, the city's sands, some say, are staffed better than ever before.

In the wake of this week's drownings, though, that optimism may hit rough waters.

In the eyes of Chad Cantelmo, 22, and his buddy Zuska, who were perched on their iconic orange pedestal on a recent day, working life doesn't get much better then being paid to sit in the sun and watch the surf.

This summer there are about 1,140 lifeguards on duty at New York City public beaches and pools, according to parks department Deputy Commissioner Liam Kavanagh. Most are between 17 and 23 years old, although there is also a cadre of people in their 30s and 40s who return each summer, Kavanagh said. The minimum age for lifeguards in the city is 16.

Thanks to a recent pay increase, first-year lifeguards are getting a minimum of $12.55 an hour -- up from $11.72 an hour last years -- which has made the jobs more appealing than in previous years.

A report from New Yorkers for Parks last year urged the city to double the lifeguard wage on an experimental basis to ensure that every section of city beach would be under the eye of a city lifeguard. Sheelah Feinberg, director of government and external relations for the group, identified lifeguard recruitment and staffing as the ultimate priority for beach safety.

Though the city did increase salaries, it did not adopt the group's proposal. The standard city lifeguard wage had been $10.08 an hour for several years, less than what public lifeguards received in many other parts of the country. The current wage is competitive. For example, lifeguards at Jones Beach, a state park not far from the city's borders only make a penny an hour more than city guards, according to New Yorkers for Parks.

The wage increase came only after the parks department consistently faced complaints about beach safety following drownings. The city saw its first drowning of the summer last week, when a 16-year-old girl was lost in a rip tide off of Rockaway Beach. A spokesperson from the parks department said Rockaway Beach was "fully staffed" at the time of the incident, and, in general, that waterfront has been "close to" fully staffed so far this season.

In addition to the 16-year-old's death, two presumed drownings occurred on Coney Island and off of the federally-overseen Jacob Riis Park in Queens on Saturday. These drownings could spark further scrutiny of the city's lifeguard program. Reports attribute the presumed deaths -- neither body has been recovered yet -- to strong rip currents.

Finding a Guard in the Sands

In return for that pay, lifeguards have to fulfill a number of requirements. "Are you whistle worthy?" the Department of Parks and Recreation asks in its 2008 lifeguard recruitment campaign.

The qualifying test for aspiring lifeguards to enter the municipal lifeguard training program requires applicants to swim 50 yards in 35 seconds or less. Once in the program, lifeguards must get in shape, learn skills, including CPR, and face more challenging tests.

Such requirements keep some jobseekers away. Most work programs area delgued with applicants. The city's Summer Youth Employment Program, for example, had to turn away more than 50,000 of the 93,750 teens who applied last year.

In contrast, the city cannot fill all of its vacancies for lifeguards. It has taken amajor effort for the parks department to build up a strong lifeguard force, which still falls short of the annual goal of 1,200 summer hires.

New York children do not always have the same opportunities to learn to swim as those who grow up in non-urban areas, making it harder to find teens in New York City with the skills to pass the lifeguard tests.

Many New York kids have access to pools, but that doesn't mean they are up to the task. "I had to practice really hard to pass the [initial] test," Cantelmo said.

Zuska, who was on the swim team all four years he attended Abraham Lincoln High School, still found he had to put in plenty of extra practice to pass that challenging first exam.

New Yorkers for Parks have pressed for better training and swimming classes for adolescents, so they can grow into great city lifeguards. So far, the group has not heard back from the department on its training proposals.

Despite such obstacles, the city's lifguarding troops have been steadily growing, according to New Yorkers for Parks. In 2001, 898 lifeguards patrolled the sands. That increased to 1,008 in 2005.

"It [the lifeguard roster] has been building gradually in the last few years," said Kavanagh. "The more [lifeguards] you start with, the more you have because many return."

Kavanagh said the department sent materials to every high school, created online campaigns, placed ads in papers and expanded the number of places where people can take the initial test for the municipal lifeguard training program. "We have a pretty good network in the public school system," Kavanagh said. "We've been going to pools, speaking to coaches, speaking to competitive swimmers."

The parks department doesn't fill its beaches just by fishing in the pool of New York City teens, though. The lifeguard recruitment page of the department's Web site features a special "International Lifeguards" section as well as a section titled "Living and Working in New York City."

Cantelmo said he has noticed a number of lifeguards from Poland-- two on Coney Island that day alone--but that they do not necessarily return to city beaches year after year.

According to Kavanagh, there are fewer foreign lifeguards this year than there have been in the past: Nine joined this year in addition to the more than 20 from previous years who returned.

For some New Yorkers, a daily commute to the city's shore by public transportation is only slightly less of a schlep than coming all the way from Europe. While most lifeguards seem to live near the beach where they work, Kavanagh said some lifeguards feel working at a beach, rather than a pool, is worth the long commute because beach season is longer and they like the atmosphere.

The New York City lifeguard shortage has made headlines every summer in recent years, but New Yorkers may have to find something else to criticize other than under-supervised beaches this summer.

This doesn't mean, however, that red flags won't occasionally mark a section of the city's 14 miles of public beach off-limits for swimming.

"We don't have full compliments every day because people have days off or can't work," Kavanagh said. He also pointed out that sometimes swimming is not worth the risk. "Places with rough areas, like there are in Rockaway, can be dangerous even for lifeguards sometimes. We're not going to endanger anyone's safety."