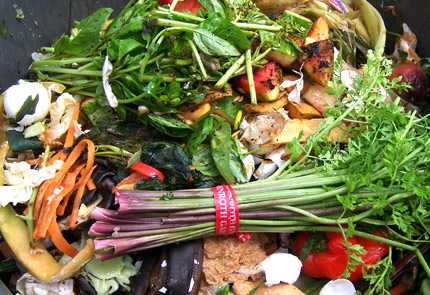 Residents, though, have few options when it comes to how to dispose of what is left over from all that food. As eagerly as New Yorkers eat, they dispose of food waste-about two pounds per household per day. One million tons of food from New York City is carted off to landfills every year.

Finding space for the waste in already overflowing landfills poses one problem. Pollution is another. While the roughly 30 percent of residential waste made up of discarded food slowly rots in landfills, it releases methane, a greenhouse gas estimated to have a warming effect 23 times that of carbon dioxide.

Across the country, cities looking to reduce waste and pollution have turned to composting. In the process they have developed a valuable resource for area parks, gardens and farm.

Gardeners often refer to compost as black gold. Though the name might sound like something out of the Pirates of the Caribbean, compost offers very real benefits. The mineral-rich product of decomposed organic waste, it helps restore soil nutrients, prevent erosion and compaction, and conserve water.

Backyard composting, in which residents combine yard waste with food waste themselves to create compost at home or in community gardens, is the cheapest way to manage organic waste. Many New Yorkers, though, do not have backyards.

To enable people in more densely populated areas to compost, larger composting facilities in or near cities to can process food waste and other organic matter. Municipalities can organize food waste collection or permanent drop-off sites. The resulting product can be sold to nearby farmers or used in lieu of expensive fertilizers in public parks.

Composting municipal organic byproducts instead of putting them in a landfill can save local governments from $9 to $38 per ton, according to a 2000 paper written at the University of Wisconsin. This could mount up, given that food and yard waste accounts for almost 30 percent of New York City's almost 3 million tons of garbage a year. 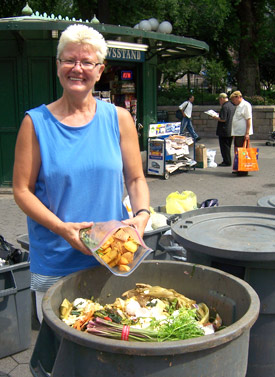 Aurelia Kaelin collects organic waste in the freezer and drops it off in Union Square with the NYC Compost project.

Intentional composting is nothing new. References to it have been found as far back as the Roman era, and George Washington's diaries revealed him as an avid composter.

Today cities across the country are following in his footsteps. Seattle provides curbside compost collection to over 90 percent of its residents. Residents of King County, which includes Seattle and the surrounding area, can put food waste, food soiled papers and yard waste into organic waste bins which they put out with their other sorted recycling to be collected and taken to large composting facilities. Even meat, fish, poultry, bones and pizza boxes too saucy for the paper bin can go with the organic waste; almost everything but pet waste and fryer grease is welcome. The finished product enriches the soil of local farms, gardens and parks. Seattle's food scrap recycling program will become mandatory for all single family homes in April 2009.

The effort is paying off. The city diverts 44 percent of its total waste stream to recycling and composting programs. Seattle hopes to divert 72 percent by 2025.

While Seattle's program is just beginning to reap rewards, San Francisco's programs, which began in 1996, contribute to the city's 69 percent total recycling rate, the highest in the nation. Like Seattle, San Francisco provides curbside pickup of food waste and organic matter. The city provides small green trash containers to collect organic waste indoors. The material then goes to a green curbside bin. The city even subsidizes compostable liner bags to help hesitant residents get started. Local businesses and restaurants also participate: Almost 2,000 enterprises contribute to San Francisco's composting efforts. The nitrogen-rich finished compost is sold to vineyards in nearby counties.

San Francisco should meet its goal of a 75 percent recycling rate by 2010, due in large part to their composting efforts.

Los Angeles plans to launch a 10,000 family curbside compost pilot program later this year. It hopes to eventually expand to all residents. From Cambridge, Mass., where businesses participate in food waste recycling collection, through Omaha, Neb., which produces and sells its own compost called "Oma-Gro," compost initiatives are catching on.

New York City has had a compost program since 1993, when the NYC Compost Project was founded by the New York City Department of Sanitation. With the project's support, staff members of the city's botanical gardens and the Lower East Side Ecology Center encourage residential and institutional composting. They hold demonstrations and classes in every borough, and operate a "rotline"-a composting hotline residents can call for help and advice. The projects workers provides information at community events, operate compost drop-off locations and offers residents can take finished compost to take back to their gardens. They also provide technical assistance to the dozens of community gardens that offer community compost programs.

Aurelia Kaelin was collecting compost for the Lower East Side Ecology Center at Union Square on a Wednesday morning. "Oh, they show up," she said of Manhattan composters, explaining that she has regulars from all over the island. Most people who collect food waste regularly in their apartments come bearing compost about twice a week, although she added, "We always have a lot more the few weeks after Earth Day."

New York has several other small food and organic waste management programs in effect. The correctional facilities at Riker's Island operate a composting program that handles much of the 30 t0 40 tons of food waste produced daily by kitchens that feed the 20,000 inmates. A compost facility created in 1996 processes the waste into compost, which is used for landscaping and inmate gardening projects.

Every fall and winter, New York's Department of Sanitation collects discarded Christmas trees and fall leaves in certain city districts to be turned into mulch. The "Leave it on the Lawn" education programs encourage residents to leave grass clippings on the ground where they can serve as natural fertilizer instead of bagging them for the landfills. The city also operates two yard waste compost facilities, which process a combined 72,000 cubic yards of yard waste each year.

The vast majority of New York's organic waste still ends up in the trash can, though.

PlaNYC 2030, New York City's sustainability blueprint, makes no mention of compost beyond the collection of yard waste. Currently, New York has no plans for its tons of food waste.

The Department of Sanitation has said they do not think a plan would be successful and point to previous pilot programs as evidence. The city's largest curbside food scrap collection pilot was conducted in 1991 in Brooklyn's Park Slope. Just under 4,000 residents were asked to separate organic matter from other trash and recyclables. The following year, 600 Starrett City residents were added to the pilot.

Many residents were reluctant to participate, citing concerns about odor, vermin, and rodents. Not enough organic waste was collected to outweigh the cost of adding additional trucks, according to the department, and the program was terminated.

As the budget tightens, cost will continue to be an issue. The Department of Sanitation reports that it is less expensive to truck food waste to landfills than to compost it. In its most recent study, conducted in 2004, the department found that while 50 percent of the waste is organic and compostable, only yard trimmings -- making up just 4.2 percent -- could be collected and composted cost effectively on a citywide scale.

To make composting cost-effective, the city would need to construct centralized state-of-the-art composting facilities and establish efficient collection methods and routes. A public education campaign would have to convince skeptical New Yorkers to overcome fears of smell and vermin and realize that composting is environmentally sound, clean and economical. 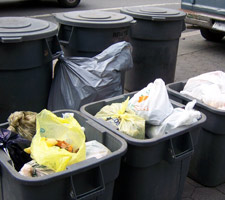 Many New Yorkers have already gotten that message. According to a report by Consumers Union, nearly one third of New Yorkers, or 930,000 households, have backyards. Of these, 70 percent have agreed that backyard composting should be considered a waste management tool. Even if only 10 percent of these households diverted just half of their food waste a week, the city could save well over $4 million in collection and disposal costs annually.

For New Yorkers without backyards, there are other options. Food waste can be brought to the NYC Compost Project collection sites as well as many community gardens. For a map of these, go here. Independent volunteers at Fort Greene Park's Greenmarket estimate that they collect 800 to 1,000 pounds of food waste every Saturday. The Lower East Side Ecology Center fills over 20 55-gallon bins a week through their collections at the Union Square Greenmarket on Mondays, Wednesdays, Fridays and Saturdays.

Committed apartment dwellers can try their hand at indoor vermicomposting. Red wrigglers, which munch through their weight in organic waste every day or two, turn food scraps into high-quality compost quickly, working away in discreet bins that are free of odor.

Other alternatives exist as well. Despite various assurances, Chris Mosier was uncomfortable with hosting worms through vermicomposting and worried about the smell if she saved rotting food in her small Midtown apartment. Now, she collects organic waste in the freezer and drops it off in Union Square with the NYC Compost project. To Mosier and others like her, composting represents a key part of a "green" lifestyle

"I feel it's great that New Yorkers recycle," she said. "The next step is composting, and it's easier than we think."

Waste management in the city is a highly complex issue. To manage your household waste and the city's tons of trash, play Gotham Gazette's Garbage Game.

To learn more about how you can compost or take part in the city's composting programs, go to:

Check out Gotham Gazette's Calendar of NYC Events for listings of local composting workshops and events.