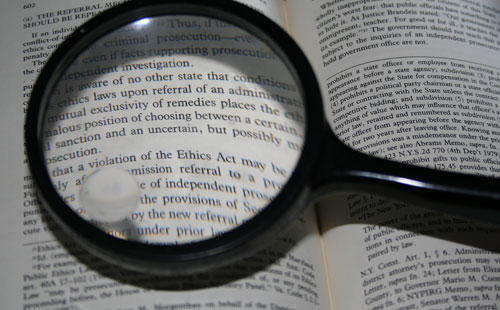 Three of the four leaders of the legislature and the heads of three major good government groups stood together in Albany on Wednesday morning and patted each other on the back for a job partly done.

"It's not the best thing since sliced bread," said Barbara Bartoletti, legislative director of the League of Women Voters, speaking of the ethics package that was 16 months in the making. "This is, for all of us and all of you, a very good loaf of bran," Bartoletti concluded. Senate Democratic Conference Leader John Sampson described the package as a "down payment on other things to come."

The ethics deal, which came together after months of negotiation between Senate and Assembly Democrats, is not the "whole enchilada," as one legislator put it -- or as sweeping as a proposal put forth by Gov. David Paterson earlier this month.

However Blair Horner of New York Public Interest Research Group, Bartoletti and Dick Dadey, executive director of Citizens Union, decided to support the legislature's package. (Citizens Union's sister organization, Citizens Union Foundation, publishes Gotham Gazette.) This package would create three new ethics oversight committees, require more financial disclosure from politicians and lobbyists and strengthen the Board of Election's enforcement wing. It is, the three groups say, a good, solid step, and they hail the fact that the legislation will sunset in four years, meaning legislators will be forced to evaluate and perhaps improve the rules.

"I think it's very disappointing," said Susan Lerner of Common Cause/ NY, "I don't think it should be enacted. We are not looking at it in terms of who proposed what. We are asking, 'Is this enough change to current law to address the crisis of corruption?'"

Lerner isn't the only one who is disappointed.

A number of Senate Democrats have complained privately that the package doesn't go far enough at a time when the public's awareness of corruption in Albany has reached a peak. From the conviction of former Senate Majority Leader Joe Bruno on federal corruption charges to recent allegations against Sen. Pedro Espada, the public has been hammered with the reality of corruption in Albany.

Yesterday's meeting in Albany came as the atmosphere surrounding ethics in the capital had become increasingly contentious -- so much so that some say Patterson might veto the bill on the grounds that it does not go far enough or as far as his proposals do.

In his State of the State speech, Paterson proposed a package that Horner called the "kitchen sink and the stopper." It was so far-reaching -- instituting term limits and introducing public campaign financing -- that many observers thought it stood no chance of passing. "It's desirable, but it's dead on arrival," Dadey said of Paterson's proposal before the State of the State Address. "The Assembly and Senate will not agree to independent ethics oversight by an entity that they don't control."

As a result, Horner, Dadey and Bartoletti decided to back the legislators' plan. They admit it's not everything they want but believe it is what they can get right now.

Lerner disagrees. "There are those who are willing to settle for something less," she said, "and we can't give them the comfort that this will be enough in the eyes of the public."

For his part, Paterson issued a statement Wednesday saying he was "stunned that legislative leaders would be so disrespectful to the public that only one week after he proposed a sweeping and real overhaul of the ethics system in Albany, they would try to pass this off as anything more than election year window dressing. This proposal does nothing to address the underlying issues that have caused the people of New York to lose faith and trust in their government."

He said he would "work with members of the legislature who are ready to pass meaningful ethics reform that changes the culture of Albany -- ending pay-to-play; full disclosure; breaking the special interests lock on Albany with strict campaign finance limits; and independent oversight."

The ethics package would discard the Commission on Public Integrity -- the ethics watchdog group that currently oversees all branches of state government. That group has 13 members -- seven appointed by the governor and one each by the attorney general, comptroller and the four legislative leaders. Scandals have rocked the board and many have already called for its abolishment following a report by the inspector general that found the head of the commission had illegally leaked information to Gov. Eliot Spitzer. Since then individual members have drawn fire for serving as legal advisors during the last year's Senate coup and hosting fundraisers for legislators. One member even held a fundraiser to help pay Bruno's legal fees.

Three new oversight bodies -- one for the executive branch, one for the legislature and one for lobbyists -- will replace the Commission on Public Integrity. This basically restores the system that existed before Spitzer led the charge in 2007 to combine the State Temporary Commission on Lobbying and the State Ethics Commission into one body. All would have directors appointed to fixed terms who could be removed only for cause.

The governor, attorney general and comptroller would each name two members to the six-person Executive Ethics and Compliance Commission. This means the governor would not name a majority.

A Joint Legislative Commission on Ethics and Standards, with eight members -- four of them legislators -- will keep an eye on the legislature. Members would be named by each legislative leader. In other words, legislators will be able to appoint their watchdog. Paterson has said this is a major problem for him and that he would not rule out vetoing any package that did not include an independent oversight board for the legislature.

The commission also would have a department of investigation that would have subpoena power.

The six-member Commission on Lobbying Ethics and Compliance will have two people appointed by the governor and one by each of the four legislative leaders.

David Grandeau, who served as the executive director of former state lobbying commission, said he supported the legislature's proposal simply because it brings back a lobbying oversight board. Under his watch, Grandeau said, the body gained national recognition. When asked if he would like to be part of the new panel, Grandeau said, "We have to focus on getting this passed."

Paterson's bill would replace the Commission on Public Integrity with one five-member Government Ethics Commission. It would oversee all of state government rather than splitting oversight into three sections. The five members would be designated by a 10-member commission. Good government groups favor this model, but are convinced the legislature will not vote for an oversight board that they do not control.

Under the bills in the ethics package, legislators for the first time would be required to disclose how much income they make from outside employment. Lobbyists with any business before the state would be required to reveal any relationships they have with lawmakers, including any money paid to a consulting group or a law firm that employs any public official.

The legislation does not require lawyers, along with doctors and other so-called protected professions, to disclose their clients, which journalists and good government groups have been demanding for years. Sen. Ruben Diaz has said he would not vote for a bill that does not include that requirement. However, such a provision would certainly irk Assembly Speaker Sheldon Silver and Sampson, since they both work as trial lawyers at prominent law firms.

The legislature's package would create an enforcement unit within the New York State Board of Elections and direct 35 percent of the board's annual budget to the unit. It would be harder for investigations to be stopped and easier for them to be started than is currently the case.

Penalties for campaign finance law violation would get tougher. For example, the fine for failing to file disclosure reports would double from $500 to $1,000, and legislators who failed to file more than three times in an election cycle could face a penalty of up to $10,000.

Paterson's proposal would place more restrictions on campaign donations, create a public campaign finance system and institute term limits. These proposals are not in the legislature's package. Silver has said repeatedly that "there is no sentiment" for term limits. He has served in the Assembly since 1976.

While the legislators' bill is almost certain to pass the Assembly with immense bipartisan support, its fate in the Senate is uncertain.

The Democrats' thin majority faces more peril by the day -- the Senate might have to delay its punishment of Sen. Hiram Monserrate to insure the bill gets a speedy passage.

Then there is the question of whether the Democrats can count on support from every member. Diaz is already threatening to vote no, and Monserrate -- or his friends -- could use their votes as leverage to protect the Queens Democrat.

Democrats may in fact need help from Senate Republicans to pass the ethics reform bill, but the Senate Republican conference seems to be preparing to oppose the package. "It is unfortunate that despite their claims of bipartisanship, Democrats in the Senate and Assembly refused to include Senate Republicans in the negotiation of ethics reform legislation, and that they chose not to give us a bill draft until late yesterday," the Republicans said in a statement released Wednesday. "Apparently Speaker Silver and Senate Democrats think it's more important to negotiate directly with special interests than with the other elected officials they want to support the bill."

The statement continued that the Republican would review the legislation to see "how it differs from the ethics reform bill that Senate Republicans were prepared to support last year, before Senate Democrats pulled it from the floor to prevent a vote." They also said they might "offer amendments that seek to strengthen the bill."

Democrats insist Republicans had every chance to be involved in the process. When asked whether Senate Republicans were left out of the process, Austin Shafran, spokesman for the Senate Majority Conference, scoffed and rolled his eyes. "Taking ethics advice from Senate Republicans, with their history of corruption, is like taking marriage advice from Tiger Woods and Charlie Sheen," Shafran later toldthe Daily News.

Sen. Daniel Squadron, who was instrumental in negotiating the package, said that he hoped legislators could get over any perceived slights in the process or imperfections in the legislation. "It is more important to have a good bill than to have a perfect press release," he said.

Then, of course, the bill must win the governor's approval. Legislators say that it would be "suicide" for Paterson to veto the measure. However, in the atmosphere created by Paterson's caustic state of the state address anything could happen. Sampson and Silver were scheduled to meet with Paterson on the reform measure days before a deal was reached. Both leaders canceled on the governor at the last minute.