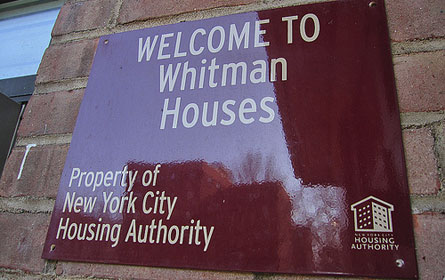 Photo by how_long_it_takes
In his long-shot effort to unseat Assemblymember Joseph Lentol, Andre Soleil charges Lentol has neglected the problems facing residents of the Walt Whitman houses and other poorer parts of the Brooklyn district.

After 38 years in the State Assembly, Joseph Lentol is running for the office once again. And his only challenger in the Democratic primary, Pentecostal minister and attorney Andre Soleil, believes it is time for a change. Voters in the district "haven't had a choice since 1985," said Soleil, who faces the slim odds of beating a long-time incumbent in this year's race.

Lentol, though, believes he has earned the chance to remain in Albany and represent the 50th Assembly district. Throughout the years, he said, he has worked to improve Brooklyn's waterfront, advocated for tenants' rights and sought to pass legislation addressing environmental issues in the district, such as the bill to close RADIAC, a radioactive waste site located next to a public school.

In Brooklyn's 50th Assembly district, the issues are as varied as the population. To the north, the candidates have weighed in on key issues in Williamsburg and Greenpoint such as the newly passed extension of the 1982 Loft Law and the planned Domino housing project along the waterfront.

Soleil has accused the Assembly member of neglecting social issues in the southern part of the district, which includes Fort Greene and Clinton Hill. Soleil claims that Lentol has not paid sufficient attention to the city police department's stop-and-frisk policy and that the high rate of HIV/AIDS cases in those areas has not been properly dealt with.

Lentol disputes Soleil's claims and said he remains confident of his relationship with his constituents.

Lentol and Soleil differ over the plans to convert the abandoned Domino Sugar refinery on Kent Avenue in Williamsburg to a residential development.

The Assembly member opposes the project, arguing it will overtax essential neighborhood services including schools, public transportation, the local police precinct and the fire department. "What many don't know," Lentol said, "is that the city already closed "The People's Firehouse" serving the area, although the population has increased in recent years.

Lentol agrees with the developer, Community Preservation Corp.'s setting aside of 30 percent of the apartments as affordable housing. "We like the affordable housing. I like the fact that they did some sort of compromise, but I would like to see the project scaled down" more than it already has been, he said.

Soleil supports the project as it is. "For these development projects, I would certainly support developers who make agreements with the surrounding community," he said. "That's exactly the kind of housing project that I think needs to be encouraged throughout the city."

Soleil does not believe that the project will put too much stress on the waterfront area. If it does, for example, strain the transit system, he said, the community should "lean on the MTA to increase the frequency of trains. It would be incumbent upon the state to use the additional property taxes to make that possible."

On June 21, Gov. David Paterson signed an extension to the 1982 Loft Law, which protects residents of illegally converted loft apartments by requiring landlords to modify the buildings to meet safety standards. Loft tenants, many of whom live in Williamsburg and the surrounding neighborhoods, will have the same rent stabilization protections that other residents of the city currently enjoy.

Those who oppose the law have charged that landlords will pass the cost of increasing safety standards onto the tenants. The Bloomberg administration has criticized the law, saying that it will hurt manufacturing.

Lentol, who sponsored the bill, believes that an increase in rent would be worth it. "In the long run, it would be beneficial to somebody who's renting their apartment. We want the building to be brought up to code, even if it's a struggle," he said.

Soleil also supports the measure. Responding to the mayor's concerns for industry, he said, "The residential use is something that is better for us at this time. Our city needs to be able to adapt to the changing economy." He added, "the manufacturing systems have gone to New Jersey."

In his campaign, Soleil has focused on the southern part of the district, including Fort Greene, The candidate, who is black, accuses Lentol, who is white, of "largely ignoring the black and Latino population" in the area. He has criticized the Assembly member for not having an office in the southern part of the district and claims that he rarely sees him at community events.

Joseph Lentol was first elected to the State Assembly from North Brooklyn in 1972 and said he has developed a strong relationship with his constituents in the years since.

"That's not surprising to me," retorted Lentol, "because I've never seen him in Fort Greene or Clinton Hill." Lentol asserted that over the years he has been to many community meetings. "Ask the people of the district if I'm in touch with the community. I'm confident in my relationship with my constituents, he said.

To bolster his argument, Soleil pointed to the police department's use of the stop-and-frisk, particularly in Fort Greene's Walt Whitman and Ingersoll housing projects. "Stop-and-frisk is a way of life" in Fort Greene, the candidate said, much as it in Bronwnsville. As a lawyer, Soleil said, he has defended a number of people who have never been arrested and who have been brutalized for "looking suspicious."

Lentol has not done enough to address the issue, Soleil claims. "Developments for low-income tenants should not be treated as concentration camps."

On July 16 Paterson signed into law the bill limiting the records the police could keep on such stops. Lentol says that he "has been a passionate supporter of that bill and was a key player in passing it and getting it through the committee," although he is not officially listed as a sponsor. Using stop-and-frisk, he said "to keep lists on people that haven't done anything is just insane."

Soleil also charged that Lentol has neglected the health needs of some in the district. "Fort Greene is a hotbed of HIV infection," said Soleil. He attributes this in part to the many Fort Greene residents who, he said, end up in the in the criminal justice system.

Andre Soleil has loaned his campaign $25,000, indicating, he said, that he is willing to put his money where his mouth is.

According to government sources, the state of New York has the most HIV-positive inmates in the country. About 97 percent of incarcerated individuals will be released and once again live in their communities.

Hepatitis C infection rates have become problematic in recent years as well. In 2007, for instance, 16 percent of incoming female inmates and 11 percent of new male inmates tested positive for the disease. Lentol's office has funded needle exchange program in an effort to fight this problem in the area.

Soleil recalls defending a man who contracted Hepatitis C and B after going to prison in 1976 and was neither told of nor treated for the diseases. If elected, Soleil said, he would hope to craft legislation requiring the Department of Corrections to test inmates for such diseases and then treat them if necessary.

Lentol says he "helped shepherd out of committee and voted for a bill that gave the Department of Health oversight in matters related to healthcare in the state's Department of Corrections. According to a press release, the legislation "authorizes [the health department] to conduct annual reviews of HIV and hepatitis C care in state and local correctional facilities, to mandate necessary changes, and to publicly release annual reports on correctional care."

By many accounts, Lentol's office has worked with various AIDS organizations including the Brooklyn AIDS Task Force and NYC AIDS Housing Network, and has supported a needle-exchange program with V.O.C.A.L.

Lentol said he has yet to ask for endorsements in his campaign. He currently has $273,322 on hand.

For his part, Soleil said, "We have not received endorsements and nor are we seeking them. We will be making 80,000 contacts in our district over the summer, and we're looking to win."