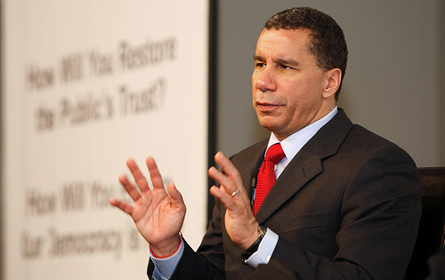 Last week, Gov. David Paterson sat at a forum on reforming Albanyand recalled how the current system of redistricting in New York personally affected him during his time in the State Senate. "It was really just the whims of senior members and antagonisms toward individuals," Paterson said, describing how he found himself representing an entirely different community after district lines were redrawn.

It was a rare glimpse into the dark realities of a system that some say has been used as a tool for legislative leaders to punish and smite their enemies and kept Republican control of the State Senate even when while Democrats enjoyed a five-to-three enrollment advantage.

Why was Paterson uprooted from the Harlem district he had long represented? Republicans wanted to oust another legislator -- Sen. Eric Schneiderman, who had earned their wrath -- and Paterson suffered the collateral damage. Both men managed to win re-election despite the maneuvering.

Every 10 years the leaders of the state legislature get to redraw the lines for the state's congressional, State Senate and Assembly districts, pushing some people into one district and some people out, thereby giving one party or another the advantage on Election Day. It is an ugly back room process based on strategy, political expedience and, sometimes, all-out political revenge. Whoever comes out with the majority in the state legislature this year will be able to control the process after the current census.

Not many believe that Democrats or Republicans want to give up the power to manipulate district lines, but the discussion is actually taking place. Last week the Senate committee on investigations and government operations approved a bill sponsored by Sen. David Valesky that would take redistricting out of the legislature's hands and give it to an independent redistricting commission. But there are many obstacles in the way of the bill from becoming law, including the Democratic leaders of the legislature and Republicans who say the bill is biased towards Democrats.

The law would have prevented Republicans in 2002 from redrawing Schneiderman's district, which originally encompassed the West Side of Manhattan and parts of the Bronx, to include almost all of Washington Heights and other parts of Northern Manhattan. The shif made the district appreciably more Hispanic and prompted Guillermo Linares, who had represented Washington Heights in the City Council for 10 years, to challenge Schneiderman. "The Republican leadership did everything in their power to alter the district to get rid of me," said Schneiderman. "The alteration of that district is a perfect of example of what is wrong with partisan redistricting." Schneiderman supports Valesky's bill as well as other redistricting measures.

In the end the Republican move did not pay off. Schneiderman won his primary.

On the day before Paterson told his redistricting story to Albany on the Record, a forum for state officials to talk about reform efforts, former Mayor Ed Koch, onetime city Parks Commissioner Henry Stern and Dick Dadey of the Citizens Union sat before the Senate committee on investigations and government operations and made their case for independent redistricting.(Citizens Union is the sister organization of Gotham Gazette's publisher.)

Dadey said he believes the time is right to pass such legislation, because of voter frustration over the legislature's dysfunction. "They see what is going on in Albany, and they have started to connect the dots. They are beginning to understand that issues like redistricting led to the mess we have in Albany," Dadey said.

Koch, who has been outspoken in his disdain for the current behavior of the state legislature, has already won the pledges of GOP gubernatorial candidates Rick Lazio, Steve Levy and Carl Paladino, as well a of the expected Democratic candidate, Attorney General Andrew Cuomo, to support independent redistricting should they be elected. The former mayor continued his attack on the culture of Albany during the hearing, saying that he had been convinced that simply pushing to "throw the bums out" won't fix the capital and could do some harm. There are some good legislators, he said, and independent redistricting would allow more good ones to be elected.

Sen. Ruben Diaz was incensed by Koch's comments. "This system has been used for years and years," said Diaz. “It has been a good system. But now, when blacks and Hispanics are becoming president and in power, the system is all of a sudden no good.” Koch responded that he had never supported the system and now had the time to do something about it.

After the meeting, Diaz told the Gazette that with Koch and Stern involved, he was sure race was the main motivating factor. "The Koch administration was the most corrupt administration we've had," said Diaz. "Now that we are in charge, we are all bums and he wants to throw us out."

(In 2005, New York City paid $20 million to settle a suit charging that the Department of Parks and Recreation during Stern's time as commissioner systematically discriminated against its black and Hispanic employees.)

The weekend before the senate hearing, Senate President Malcolm Smith said, "With the Democrats in control of the state Senate, we are going to draw the lines so that Republicans will be in oblivion in the state of New York for the next 20 years.” Koch had responded by calling Smith's comments "absolutely dumb."

Dadey said that Citizens Union has long backed changes in the redistricting system. "We supported reforming this since it has been in the hands of the legislature to draw the lines, regardless of who has been in power," he said.

The bill Dadey supports would further require these principles to be followed in districting.

I. The most and least populous senate and assembly districts shall not exceed the mean population of districts for each house by more than 1 percent;

III. Villages shall not be divided ;

IV. Districts shall be as compact as possible; and

When these principles conflict, the one with the lower number would take precedence.

Valesky's bill would require a reapportionment commission to draw districts so that all congressional districts will have close to the same number of people as possible, and are contiguous. It would also bar the creation of any districts that "abridge or deny minority voting rights" and would require that no district favors or opposes any political party, incumbent or candidate.

Supporters of the legislation say this system will ensure non-partisan districting.

"This measure would shutter the smoke-filled rooms where legislative leaders drew legislative maps that favored incumbents, diluted the voice of certain constituencies by splitting up their communities, and calcified their hold on the levers of power," said Sen. Craig Johnson, head of the Senate committee on Investigations and Government Operations. "I believe that the voters should pick their representative, not the other way around," he concluded.

But Diaz is not the only one who opposes the bill. Republicans say that, the bill, as currently crafted, favors Democrats.

The measure calls for a nominations committee to select 15 registered Democrats, 15 registered Republicans and 10 people who are registered with neither major party. From that pool, legislative would choose two members each to make up an 8-person civilian reapportionment commission. Those 8 people would then appoint 3 more members, one of whom would be the chair. That group would propose district boundaries for approval by the legislature. If the legislature rejected the recommendations, public hearings would be held before maps were redrawn and submitted for legislative approval again.

Republican criticism centers around the nominations committee. Its eight members would be appointed by the presiding judge of the Court of Appeals, the attorney general, the state comptroller, the governor, the temporary president of the senate, the speaker of the assembly, the minority leader of the senate, and the minority leader of the assembly. At this time, Democrats control a majority of those positions.

Republican Sen. George Winner apologized for his "cynicism, but said he didn't quite buy that Democrats wanted to reform the process. As evidence, he pointed to the proposed structure and pointed to the way the nominations committee would be structured.

Republicans support a constitutional amendment introduced by Republican Sen. Joe Robach that would have a "districting commission" made up of five members. Four of those members would be nominated by the four heads of the legislature. The four appointed members would then themselves appoint a chair. Republicans say this would ensure a non-partisan committee.

"There are elements of the Robach bill that could strengthen the Valesky/Gianaris bill," said Dadey. But he said the Robach bill only tweaks the current system of redistricting, allowing legislative leaders to more or less retain direct control of the system. He said the Valesky bill offers a superior system to ensure independence. "It leaves the power in the hands of the legislative leaders," said Dadey.

The nuances may not matter at all. During Albany on the Record, Assembly Speaker Sheldon Silver and Senate Majority Conference Leader John Sampson were less than enthusiastic about redistricting reform.

Silver insisted that there are certain federal regulations that require district lines to be drawn in contorted ways that seemingly split communities. And other areas have so many voters registered to one party that there is no way to make the races there competitive. ""If Lassie ran on the Democratic line in my district, Lassie would win," said Silver, who represents lower Manhattan. "I’m serious. How do you make that competitive?"

In his initial comments to the reform crowd Sampson said he knew they wanted him to promise to support independent redistricting, but said he would not make that promise.

"When the bill comes to the floor, we will make a decision on that,"said Sampson.