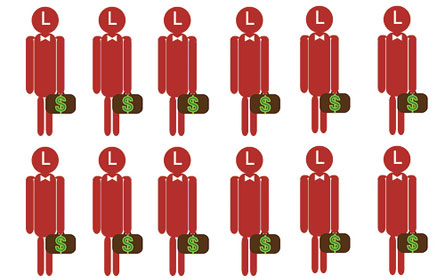 The City Council and the Bloomberg administration are in the process of forming a commission to look at the city's major lobbying law revamp approved in 2006 -- two years after the group was supposed to be formed.

The five-member lobbying commission should have been empaneled in early 2008. An administration official said the passage of the city's pay to play law, restricting contributions from those that do business with the city, including lobbyists, delayed its implementation.

But as the city prepares to take another look at the law, critics contend the city clerk's lobbying bureau, which oversees lobbying disclosure and enforcement, is inundated by delay and dysfunction. Perhaps, they charge, the office just isn't up for the job.

For example, the clerk's office has discontinued its annual top 10 lobbyist report, detailing what firms brought in the most cash every year, since former clerk Victor Robles left in 2007. The current clerk, Michael McSweeney, has officially held the reins since early 2009 and prior to that was deputy clerk since 2004. (Hector Diaz immediately preceded McSweeney, but he held the post for only a year.)

Nonprofits, many registering for the first time in the last several years, claim the agency is unresponsive and disorganized. It takes weeks, if ever, to get answers from the office, leading to inaccuracies when reporting and so-called illegitimate fines, the groups argue. Just last month, the Urban Justice Center filed a lawsuit against the clerk over violations it says it doesn't deserve.

"Whatever it is," Lasdon continued, "somebody over there is making some really bad decisions."

McSweeney declined to respond to the criticism, although he did say some of these issues will be addressed in a report to be released by his office later this year. He declined to give any more detail.

Under the 2006 law, any organization or company that is paid or expends more than $2,000 worth of time trying to sway officials must register as a lobbyist and report its activity to the city clerk every two months. They must disclose who they were targeting and what for. If they fail to do so, they can be fined thousands of dollars.

Under McSweeney, registration of lobbyists has skyrocketed. Since 2007, the number of lobbyists registered with the office has more than doubled -- from 246 to 580, according to the office's annual reports.

For veteran lobbyists who have been circulating City Hall's corridors for decades, those numbers indicate the clerk's oversight is effective.

"To point the finger and say the city clerk hasn't been doing a good job ... I wouldn't do it," said Arthur Goldstein, who has been a lobbyist in New York for 20 years. Goldstein said he always gets a timely response from staff there.

But much of the increase in registered lobbyists has come from nonprofits registering for the first time. After the 2006 law took effect, the clerk's office boosted its outreach and enforcement to register organizations and companies who engaged in lobbying, but hovered below the radar, officials said. That meant nonprofits.

Four years later, some of those affected say it isn't going very well.

"The clerk's office does not provide the best guidance for not-for-profit agencies," said Allison Sesso, deputy director of the Human Services Council. "We have had several trainings on this issue, and it's amazing to me that so many organizations are trying to comply. The guidance that is available from the city is so all over the place. [Nonprofits] are really at a loss."

The lobbying bureau has been without a department head for several months, but many of these issues, nonprofits say, go back years.

Unfamiliar with the system, some nonprofits that have tried to register their lobbying activity inadvertently filed the wrong paperwork or they claim it got tied up in the city clerk's allegedly clunky lobbying database. In the Urban Justice Center's case, the group says it filed the right information in the database, but it never reached the clerk's office.

When the center reached out to fix the problem, Lasdon said, the clerk's office refused to listen. They organization now faces a $2,700 fine, which they are challenging in court.

"I think it's a combination of mismanagement and insensitivity," said Lasdon. "Somebody running a city agency that deals with small not-for-profits has to have a better understanding of what we go through and how to work with us."

As of February 2010, the clerk has issued $314,790 in late fees, according to its annual report from March. In a statement from the city's Law Department, Corporation Counsel Michael A. Cardozo called the lawsuit "frivolous," contending the clerk's office had agreed to reconsider the fines despite the center's failure to comply with the lobbying law requirements.

The Metropolitan Council on Jewish Poverty is equally frustrated with the clerk's office. It is facing approximately $29,000 in fines (the cost of a social worker, says one staffer) for a whole year of missing reports. According to the council, it first registered at the tail end of 2008, thinking it would file reports going forward. The fines from the clerk's office are for missing reports from that year.

Meanwhile, the success of other aspects of the 2006 lobbying law remains up for debate.

Inside the Worth Street headquarters, the city clerk was supposed to start posting violations of the law online "as soon as practicable," according to the 2006 law. The clerk said the violations are only posted once a year in the clerk's annual report.

Since being given enforcement powers, the clerk has repeatedly gone after registered lobbyists for late filings. But, critics contend, it rarely triggers its other power: tackling unregistered lobbyists. Last year was the first time the city clerk found entities, including the League of Humane Voters of New York and the Flushing Willets Point Corona Local Development Corp., guilty of unregistered lobbying, according to its annual report.

Also as part of the 2006 revision, all lobbying reporting was moved from filing cabinets to an online database. But as of Wednesday, none of the 2010 filings were posted online. A spokesperson for the Department of Information Technology and Telecommunications said it is in the process of revamping the database, and lobbyists were still in fact reporting.

McSweeney said he did not know when those filings would be available online.

Many nonprofits said they want the clerk's office to be more understanding and more flexible in handing out late fees -- now $25 a day, no budging.

As it stands, they contend, it is far more likely to be fined for late filings than for unregistered lobbying. So, critics ask, why register at all?

But at least one good government group wants to go a step further.

In a report to the city's Charter Revision Commission released late last month, Citizens Union, the sister organization to Gotham Gazette's publisher, urged the commission to completely remove oversight from the clerk.

The report argued the Campaign Finance Board should oversee the lobbying bureau, contending it was more transparent and had the capacity to handle financial reporting. Most other cities, including Los Angeles, give lobbying oversight to their ethics bodies.

"The clerk is appointed by the council," said Dick Dadey, the executive director of Citizens Union. "The conflict arises by the clerk being appointed by the very body over which he has authority for lobbying oversight."

In an e-mailed statement, Matthew Gorton, spokesman for the Charter Revision Commission, said, "The Commission is continuing to review this and other proposals offered by the public, experts, and groups like Citizens Union."

The commission will be narrowing down its proposals to put on the November ballot in the coming weeks.