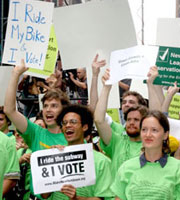 While the economic picture is grim across the country, New York City has been especially hard hit in recent months. The city's heavy dependence on Wall Street revenues has left us facing a projected budget shortfall of nearly $4 billion. Adding to the city's crisis, a quarter of the shortfall is due to state cuts resulting from Albany's crippling financial difficulties.

Paying Attention to Cities By Jonathan Bowles
After years of federal policies neglecting urban areas, Barack Obama has sent some encouraging signals that he understands their importance. Certainly, New York could use a helping hand. The director of the Center for an Urban Future lays out some ideas for what the president could do to aid New York.

An $825 Billion First Step By James Parrott
The stimulus package proposed by Congress is key to halting the economy's downward spiral but it will not solve all our problems. Economist James Parrott of the Fiscal Policy Institute looks at what the package would do -- and what more needs to be done.

Infrastructure Investments that Make Sense By Carter Craft
As big as the stimulus package may be, the country has to invest the money wisely. An urban planner offers some novel ideas for New York projects -- from recycling grease to ferries for freight.

From Gas-Guzzling Cars to Clean Buses By Charles Stone
Simply lending funds to struggling auto companies won't spur economic growth. Instead, an economist suggests, the government should create a voucher program to deploy the resources of the auto companies, spur investment -- and help the environment.

Previous Articles
A Federal Stimulus for City Parks By Anne Schwartz
Advocates hope that President Obama and Congress will recognize that funding parks would not only improve the quality of life and the environment but also spur investment and raise real estate values.

Stimulus Money: The Downturn's Silver Lining? By Graham Beck
The stimulus package could offer more federal funds for transportation projects. The MTA is making its list, but there are sure to be lots of restrictions -- and competition.

The crisis highlights the danger of the city's economic over-reliance on Wall Street. Even when times are good, only a few New Yorkers reap economic windfalls. When times are bad, the entire city suffers.

For all the pain it is causing, though, the sagging economy presents us with the chance to rebuild our economy in a way that prevents similar economic crises in the future. The federal economic stimulus package before Congress presents an opportunity to build a greener and more equitable economy. Urban Agenda, convener of the New York City Apollo Alliance, urges Congress to fund projects that will create high-quality, "green collar" jobs and help make New York City more environmentally sustainable.

A stimulus package for New York City must focus on increasing investments in public infrastructure -- rehabilitating and retrofitting schools, buildings and mass transit systems - not on giving tax breaks. Currently, the Obama administration is proposing $150 billion in tax cuts for businesses. However, prominent economists, including an advisor to Republican presidential candidate John McCain, note that every dollar spent on public infrastructure projects generates $1.50 in economic activity, while tax breaks lack this "multiplier effect." Every $1 in tax cuts produces less than $1-- and sometimes as little as 30 cents -- of economic activity.

Green Is Not Enough

While we need to act quickly, we must also act responsibly. It is not enough to just create "green" jobs. Instead, we must create "green collar" jobs that pay well, provide health benefits and offer opportunities for career advancement while improving our environment.

This is key. Creating jobs that pay poorly and do not provide health benefits or pathways out of poverty will lead to an underclass of workers employed in green jobs but unable to make their way into the middle class. If we consider both environmental benefits and wage and job standards, we can have jobs that will help the resurgence of the middle class, strengthen our economy and make New York City a leader in sustainability.

The NYC Apollo Alliance has compiled a list of recommendations for evaluating projects to ensure that we maximize the potential of our green collar workforce. (The full document can be found here.). Projects funded with stimulus dollars should:

The economic stimulus must fund training and readiness programs to ensure there are enough skilled workers ready to do these tasks. The Consortium for Worker Education, the Association for Energy Affordability and the New York Industrial Retention Network developed a plan to integrate economic development and workforce development to promote energy efficiency. With funding, this proposed Green Jobs Center would include a training center to assess, train and place over 2,700 workers in the energy efficiency industry. The center also would provide business services for over 900 businesses seeking to expand or enter the energy efficiency market over a three-year period.

Finally, to ensure that stimulus spending creates jobs in the near future and new industries in the long term, it must include language that allows cities and states to give preference to local companies when they purchase goods and materials used in federally funded capital projects. This will nurture local green manufacturing and reduce the carbon footprint of projects by removing the need to transport products long distances.

The Wall Street disaster offers us the opportunity to build a new economic future. Wisely invested, the federal stimulus can generate the green collar jobs that will rebuild our middle class and create a more sustainable environment for generations to come.

J. Mijin Cha is director of campaign research at Urban Agenda, convener of the Apollo Alliance. The alliance is holding a public forum on Feb. 2nd to discuss the New Apollo Plan, the economic stimulus and New York City. For more information, visit www.urbanagenda.org