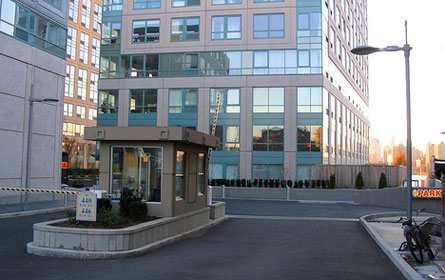 Photo (cc) mikebot
Luxury condos like Schaefer Landing block easy public access to the waterfront and once unfettered views of the skyline.

Amanda Burden, chairperson of the New York City Planning Commission, boasts that since 2002, the city has completed a record 94 rezonings, creating the most sweeping revision of land use regulations throughout the city's five boroughs since the Zoning Resolution was rewritten in 1961. This massive rezoning effort supports the development priorities of Mayor Michael Bloomberg, who in 2007 introduced PlaNYC2030, a long-term plan to incorporate almost 1 million more residents by the year 2030.

The city's rezoning frenzy, though, highlights two fundamental problems with its approach to our neighborhoods. One is that the zoning is not based on any comprehensive review of community needs and priorities or any long-range planning. In other words, it's zoning without a plan.

The second and related problem is that, while the rezonings mainly create short-term opportunities for real estate development in neighborhoods where there is intense speculation, the city's planners falsely promote them as being aimed at preservation. In the endless succession of community meetings that go into the rezonings, the city's experts offer colorful slide presentations and discourses on technical details in an effort -- often successful -- to obscure matters. In fact, though, these rezonings are scams.

The principle culprit in this professional land use swindle is the Department of City Planning, the agency that Burden directs and that provides the staff for the 13-person City Planning Commission that she chairs. The Planning Commission officially sets the policy but it relies heavily on recommendations by the planning department staff and is dominated by mayoral appointees (7 out of 13).

Zoning is a regulatory scheme for controlling the built environment, the physical shell that contains our vibrant human communities. Zoning is not the same as planning but should be based on planning. The city planning department, though, treats the Zoning Resolution itself as the plan for the city.

That view focuses only on the physical dimensions of buildings and plots of land. It doesn't start with the needs of the people who live, work and pass through our neighborhoods. It doesn't address public places, how people relate to the land and one another, and the needs and problems that arise from these relations. There is no place in zoning for the flora and fauna, the natural environment within which we live. While these may be mentioned in the cumbersome environmental impact statements that accompany rezonings, those documents also have little to do with real long-term environmental and health issues.

Community planning, as distinct from zoning, looks at all of these things and lays out visions for the long-term future. There are well over 70 community plans in New York City, many more plans than city planning has done, and while 10 of them have been officially approved, the city has done little to promote and implement them. (I discuss this further in my book, New York For Sale: Community Planning Confronts Global Real Estate.) In several instances, such as Greenpoint and Williamsburg in Brooklyn, the department has undermined the community's plans with its rezoning scams.

These scams come in four major varieties: affordable housing, building height, mixed use and waterfront access. In many instances, all are used at once.

In lower-income neighborhoods facing gentrification, city planning has upzoned -- increased opportunities for development -- to encourage the influx of new residents with higher incomes. This creates a ripple effect that jacks up land values and rents, forcing out people living in public and private affordable housing. Activists working to stabilize the neighborhood so that the people can afford to stay would probably oppose that scenario. So to sell the rezoning, the city latched on to and co-opted an idea that first came from the neighborhoods - inclusionary zoning -- and twisted it to serve the interests of the developers.

Under inclusionary zoning, the city would require that a certain percentage of new homes in an area be affordable. Here, though, is how New York's inclusionary zoning scam works. In designated areas ripe for development, the city changes the zoning to allow more development but offers potential developers the option of getting a bonus of 20 percent more floor area if they agree to make 20 percent of the homes affordable to people with low- and moderate-incomes.

The Department of City Planning's public relations campaigns give the impression that if their rezoning passes, affordable housing will get developed. The problem, though is in the details:

-- The inclusionary zoning is strictly voluntary, at the discretion of the developer. Housing advocates have pointed out that, when inclusionary zoning has been successful, it has applied to all developers everywhere in the municipality. That way it can't favor one neighborhood over another. It also has been mandatory for the simple reason that if it's voluntary, the affordable housing may not get built, particularly in today's real estate market. Many developers won't even be bothered with affordable housing even when the market is up.

-- Affordable housing is normally built with public subsidies -- that's right, it doesn't cost the developers and, in fact, they can make money on it. These subsidies are limited, especially in hard times when the demand for affordable housing goes up and available subsidies go down.

In neighborhoods dominated by low- to mid-rise buildings, city planning's upzonings encounter legitimate concerns from residents who fear that the new construction will be out of scale and tower over existing buildings. The planning department thus invented the myth that a rezoning, even when it increases the amount of building space, puts a cap on building heights and replaces zoning that has no height cap.

In such cases the new zoning -- called contextual zoning -- does indeed have an explicit height cap and other provisions that consider existing buildings in the surrounding area. But the older non-contextual zoning also had an implicit height cap that in practice kept tall buildings from being built. Whether it's the old or new zoning, developers can only build so high because the amount of floor area they can build is limited.

If the new zoning permits more floor area it may encourage property owners to demolish smaller buildings and build taller ones -- even with the new height limit.

This is exactly what happened with the 125th Street. Portions of this major thoroughfare had one to three-story commercial buildings before the rezoning even though, in theory, only the sky was the limit. Now they can be replaced with 20-story buildings.

In neighborhoods like Greenpoint and Williamsburg that have had rich mixtures of industry, commerce and housing, rezoning schemes face opposition from people who believe that mixed use should be preserved and industry should not be forced out to build bedroom communities. Greenpoint and Williamsburg spent over 12 years preparing their neighborhood plans that proposed to preserve mixed use.

Not long after the City Planning Commission and City Council approved these plans, the Department of City Planning came out with a proposal to rezone large swaths of industrially zoned land for residential and mixed use. The problem is the new mixed-use zones allow for both residential and industrial uses to compete with one another. But in a hot market, like the one in Greenpoint and Williamsburg, no developers in their right mind would build for industrial tenants when they can sell or rent residential property for 10 times the price. In effect, the mixed-use zoning was a back-door residential rezoning.

In reality, the city does not seriously consider creating public parks or placing waterfront land in some sort of trust. Even worse, city planning claims that the new development must be high-rise and sufficiently upscale so that developers can afford to build the public access. But the more high-rise and luxury the new development is, the more likely it is that the public promenade will become an exclusive backyard for the residents in the luxury towers.

The Department of City Planning used the waterfront access scam in Greenpoint and Williamsburg, where new buildings going up are indeed becoming exclusive enclaves. A new public waterfront park proposed by residents and reluctantly promised when the neighborhood was rezoned has not been built.

The residents of Greenpoint and Wiliamsburg had a vision of a mixed-use low to mid-rise waterfront with public access -- not rows of luxury housing. Instead, it has seen its neighborhood, hit by the inclusionary zoning, building height, mixed use and waterfront access scams and its hard-fought community plans undermined.

A Future for Planning

History will determine whether the optimistic growth scenario behind the department's rezonings and the mayor's 2030 plan survive the current burst in the real estate bubble. But neighborhoods throughout the city will nonetheless have to live for some time with the zoning in place.

This is a good time for the city to rethink its approach to both community planning and citywide planning, starting with the real needs and priorities of its residents and workers instead of the amount of floor area that can be built. It is also a good time to shift the main focus of development from lower-income neighborhoods that have experienced intense displacement pressures to the many low-density outlying neighborhoods that were down-zoned by the department.

This would require a complete turnaround in the way the Department of City Planning deals with community boards and community organizations. Instead of wearing out people with endless informational meetings and public hearings -- sessions that result in few, if any, actual changes to the city's plans -- how about a real dialogue between residents and government about the needs and priorities of communities? How about planning for long-term sustainability, from the top-down and from the bottom-up?

Tom Angotti teaches urban affairs and planning, is director of the Hunter College Center for Community Planning and Development and co-editor of Progressive Planning Magazine.