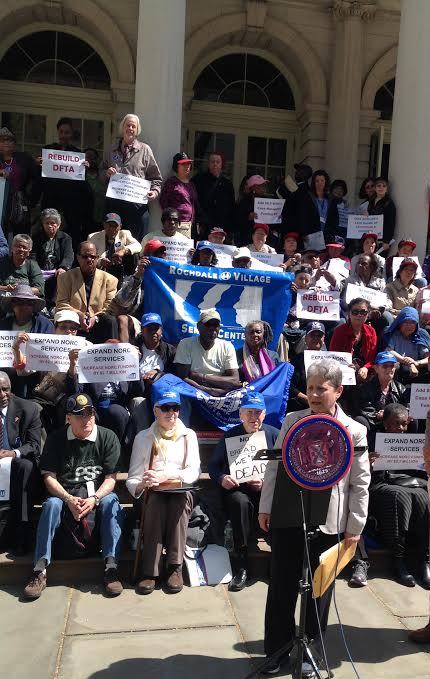 Mayor de Blasio's new housing plan recognizes that New York City is in the middle of an "Aging Tsunami" and pays special attention to senior housing. From 2000-2030, the city's age 60+ population will increase by 47% to 1.84 million, or 20% of the population. According to the City's measure, more than 20% of older New Yorkers live in poverty. Average annual Social Security payments of only $14,700 leave thousands struggling financially. Single elderly households, on average, pay 58% of their income on rent, with little left to afford food or medicine. There is a compelling need for affordable senior housing.

The Mayor's plan offers an increase in supply of senior housing (including on NYCHA sites), supports higher SCRIE income limits and better outreach, and champions Naturally Occurring Retirement Communities, among other initiatives. This is smart and cost-effective planning but what really distinguishes his attention to senior housing is compassion and dignity. Mayor de Blasio understands that older adults are the backbone of families and communities.

All that being said, Mayor de Blasio's 200,000-unit affordable housing plan can be a game-changer for New York's elderly with three add-ons:

1) The City must at least double production of senior housing. The new housing plan does not specify production targets for senior housing and fewer than 10,000 senior units were developed and preserved over the last 10 years, while our population is aging and demand is growing rapidly. In addition to increasing production at HPD, the City should target 1 in 5 guaranteed inclusionary units for senior housing so that we can start to prepare for a population of 1 in 5 seniors that is expected by 2030.

2) The City must adopt a new model for senior housing which includes service coordination. Cost savings and improved outcomes can be achieved by congregate senior housing with an on-site social worker to connect low-income seniors with appropriate services and supports as their needs evolve.

3) City Hall must support SCRIE reforms that will reduce unmanageable and extreme rent burdens. Protecting seniors on fixed incomes from rent increases is essential, but for SCRIE beneficiaries who already pay more than half of income on rent, they need rent relief to age in place with dignity.

After seven years of relentless cuts, $55 million from the Department for the Aging (DFTA) funded community-based services, the City would be wise to invest in rebuilding services and enhancing those that are inadequately funded. A robust community-based service network along with a comprehensive affordable housing plan will go a long way to allowing older adults to remain actively engaged in their communities. Family caregivers, including many women in the workforce, need supportive services for their parents or loved ones in order to remain working or be promoted. Access to affordable elder care is the workforce issue of the 21st century.

Challenges of growing old in NYC include issues and values progressives are concerned about: access to nutritional food and hunger, poverty and income inequality, domestic violence including elder abuse, affordable housing, support for families, support for immigrants, retaining and building strong communities and more. Including all New Yorkers across the lifespan in this great progressive movement is "age equality".

Impactful additions to the City's new housing plan combined with a robust community-based network of aging services will allow older adults to age with dignity in their homes. By adopting the Age Equality agenda, Mayor de Blasio will be laying the foundation to make New York a more affordable and livable city for all ages.

***
Bobbie Sackman is Director of Public Policy, Council of Senior Centers and Services
Contact: This email address is being protected from spambots. You need JavaScript enabled to view it.