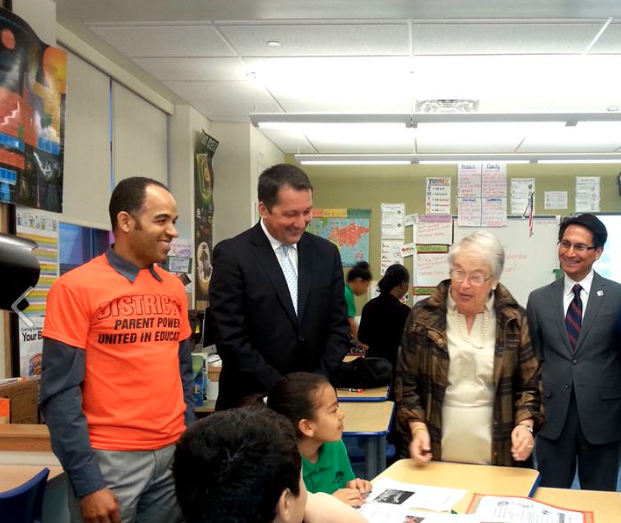 The author, left, and Chancellor Fariña make a school visit

Last week, Mayor de Blasio announced he is ready to move on his pledge to open 100 community schools by the end of his first term by utilizing a $52 million grant to create 42 new community schools in high-needs neighborhoods.

Community schools hold the power to tackle the tale of two cities in our school system—where deep educational disparities have meant 80% of students graduating college-ready in Tribeca and only 8% in Mott Haven. The innovative model will turn schools into community hubs that bring together social-emotional, medical, adult education, recreational, and job training services, and, along with a positive school climate, can address the needs of students, families and the entire community.

As a parent of two sons, I've experienced the best of times, and the worst of times, through two very different New York City public schools. Based on my experience, I believe parent engagement is the key to making the mayor's community schools initiative succeed. In turn, the community schools initiative can serve as the guiding vision to support all public schools to succeed.

The worst of times was at PS 73 in the South Bronx, a school left to struggle and which my sons no longer attend. Under the Bloomberg administration, the school stood at risk of closing for poor performance, while being underfunded and neglected. Students, parents, teachers and staff were kept on the edge of their seats, with repeated threats of phase-out and closure. In the end, they never closed the school. But, they also never provided any additional resources or supports, and the majority of parents were shut out from any meaningful role in school improvement.

The year my sons graduated from PS 73, the Campaign for Fiscal Equity commitment, which had promised us billions of added classroom dollars for struggling schools across the state, was put on hold for a third year. I was forced to accept budget cuts, instead of high quality education for my two sons.

Why should parents have to accept that their children receive an unequal education? I didn't, and no parent should.

Now in the best of times, my sons attend the New Settlement Community School, with the community schools model that Mayor de Blasio is going to expand. The school has everything: a clinic if they have a cavity or any other health needs; strong academics; swimming, ballet, and music programs; parent workshops regarding school involvement and nutrition; and so much more—all under one roof.

My sons now get up early in the morning to play basketball in a full, well-maintained court and stay after-school for reinforcements in math and reading. I have never seen either of them more focused or motivated. The community school makes both of my sons' education complete.

The key to the success of this school, which should be applied to each of the mayor's 100 community schools, is strong parent engagement from the beginning in both design and evaluation. Unlike at PS 73, parents at New Settlement are treated as full partners. The doors are open, there is mutual trust among teachers, administrators, and parents, and constant outreach is made to parents to get us involved.

In the mayor's initiative, each school will receive a full-time resource coordinator. They will recruit partnerships and resources for the school, working with the principal and school community to create a well-designed and effective community school. I strongly believe that this is a job for people with passion—for individuals who truly believe transforming education is possible.

The engagement of parents must be a large part of measuring the success of these resource coordinators. They must meet parents where they are, and reach out especially to parents who aren't involved in the school through home visits, phone calls, community meetings, whatever it takes. They should listen to parents' ideas, their anxieties and their vision. Parents should be offered clear pathways to become leaders in the school and the community.

My optimism for real improvements in our education system is now revived. The community schools model transformed the education of my two sons, and now our mayor and chancellor are committed to expand this model and move the public school system in a direction that is focused on educating the whole child.

***
Jose Gonzalez is a parent leader with United Parents of Highbridge and the NYC Coalition for Educational Justice. His two sons attend the New Settlement Community School in the South Bronx.