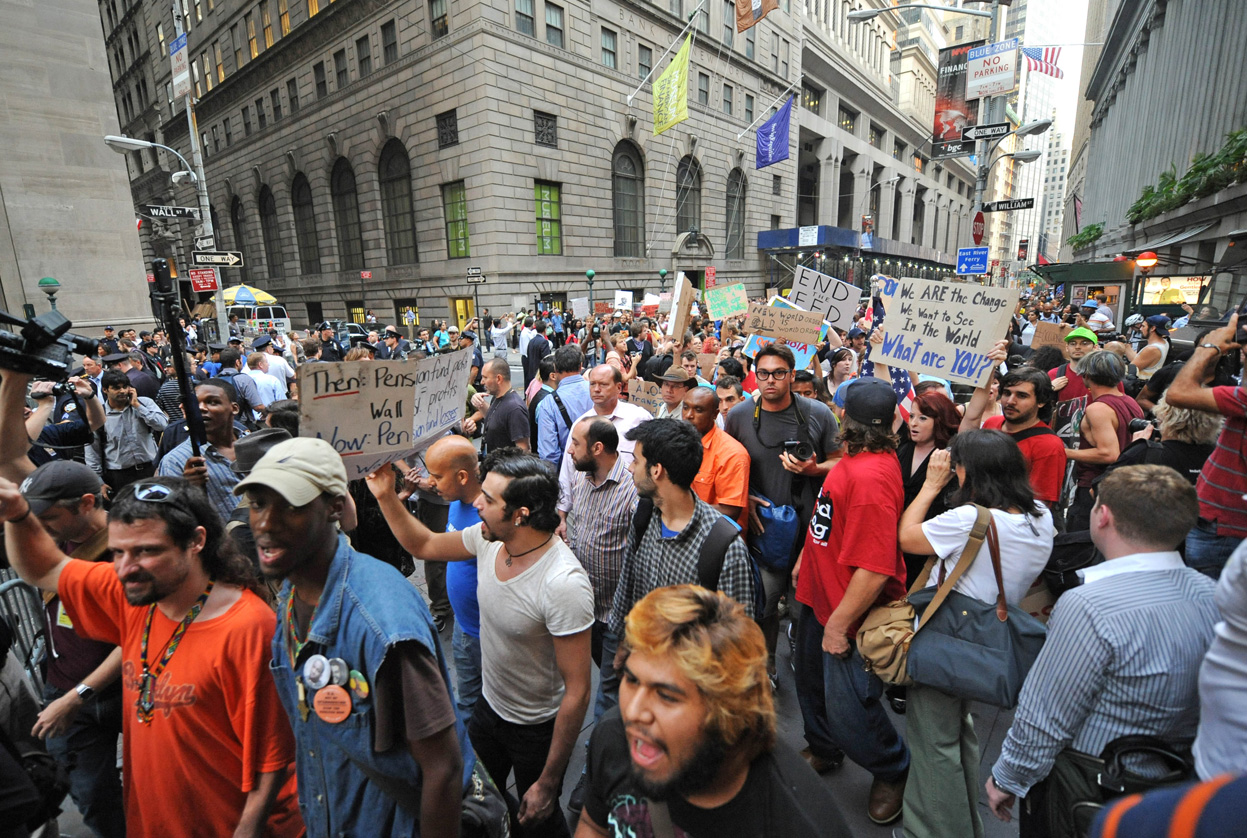 As illustrated by its slick subway ad campaign, and the participation of leading political figures including U.N. Secretary General Ban Ki-moon, this Sunday's People's Climate March intends to make a dramatic statement.

Led by the environmental activist group 350.org, the event's organizers promise the "largest climate change march in history." With numerous labor and community organizations on-board, it's likely that the protest will reach its goal of bringing 150-200,000 people to NYC streets.

But the mostly low-profile route of the march suggests that the right to protest on the streets of NYC remains under assault.

Departing from Columbus Circle, participants will head down 6th Avenue to 42nd Street, then move along 42nd to 11th Avenue, where they will hold various activities. The route straddles, but does not proceed through, Times Square.

Flash-back for a moment to the June 1982 anti-nuclear protest, when nearly one million people descended on the Great Lawn. Over the last decade, the city has tried to insulate many of its most symbolic spaces from demonstrations, with the Bloomberg administration denying access to both the U.N. and Great Lawn for Iraq War protests in 2003-4.

Sunday's event coincides with the U.N. climate summit that opens next Tuesday. With security procedures taking effect this weekend, a march ending at Dag Hammarskjold Plaza was not an option. Organizers thus aimed for the route to proceed through Times Square, enabling the protest to call attention to a global problem at "The Crossroads of the World."

Leslie Cagan, a main organizer of the Iraq War marches, led the negotiations for the People's Climate March. As she explains, the NYPD's representatives, made up primarily of commanders from Manhattan South, stated from the outset that Times Square was not an option—a position Cagan sums up as "just because."

Meanwhile, NYPD officials seemed in no hurry to finalize the route. According to Cagan, the "slow-moving" process took over four months after the first meeting in April.

Throughout the negotiations, leaders from various unions and community organizations participating in the march reached out to City Hall. Cagan says that the resulting meetings with de Blasio administration higher-ups showed that there was an "easier, friendlier" attitude towards street protest prevailing in the post-Bloomberg era.

Even so, the march route seems to lack symbolic value.

"We got most of what we wanted," says Paul Getsos, National Coordinator for 350.org. He stresses that the stretch along 42nd Street will enable participants to make their case at the entrance to Times Square.

Getsos also envisions that the stretch of 11th Avenue (from 42nd down to 34th) where the march ends will become a "celebratory, community-oriented" space, full of meet-up tables, artwork and various musical performances. According to Cagan, the NYPD raised no objection to organizers' requests for this area.

What's being billed as a history-making event thus ends at a nebulous location. And it's highly doubtful that by nightfall, the NYPD will allow the Javits Center and surrounding area to become anything resembling Zuccotti Park.

In part because they see the march as destined to be ineffectual, a variety of climate activists are planning "to flood Wall Street" on Monday. By denying access to places like Times Square for peaceful protest, city officials are thus spurring more disruptive direct action confrontations.

The current mayor may be more sympathetic to demonstrations, but the real problem is that his office doesn't control access to public space. While the NYPD decides what happens on city streets, the parks department has placed numerous restrictions on events at the Great Lawn.

One solution is for the mayor or public advocate to directly oversee the protest permit process, rather than let city agencies run the show. After all, if their voice is muted on the city's streets, the masses can at least hold elected officials accountable in the voting booth.