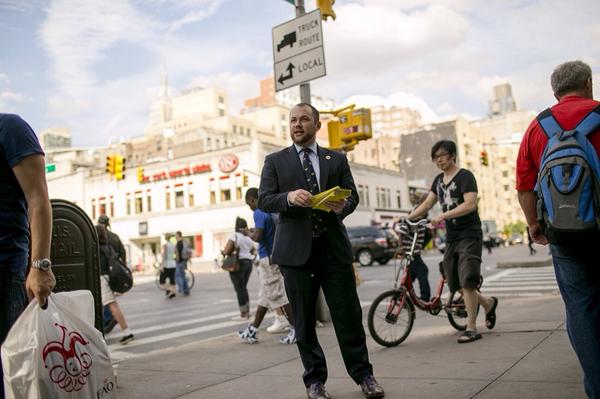 On Thursday, April 16, City Council Member Corey Johnson introduced legislation to create an Office of Drug Strategy to oversee New York City's myriad and sometimes contradictory approaches to the problems associated with drug use. This new office could play an important role in coordinating dozens of agencies that deal with relevant issues. Moreover, it could move the city away from a primarily punitive approach to drugs and toward one based on research and best practices - increasing the health and safety of individuals and communities while saving the city money.

Despite decades of a relentless War on Drugs, drugs are cheaper, of higher quality, and more easily available than ever. While concerted police action has helped remove much of the most visible drug dealing, drugs are widely available to anyone who wants them. Surveys indicate that high school students have almost universal access to drugs – though most choose not to use them. And relying on police and prisons to try to stomp out drug use has been a failure for people who use drugs and their families.

In recent years deaths from heroin overdoses have increased by 100%, killing more people than homicides. Too often people experiencing drug use problems are given few options. Existing voluntary drug treatment programs are overwhelmed by demand. Even those with good insurance have difficulty accessing high quality care. And stigma is widespread, in part because we continue to criminalize people who use drugs

The criminalization of drug users and dealers has fallen primarily on communities of color. In New York State 90 percent of those incarcerated on drug charges are black and Latino; similarly, about 85 percent of those arrested or ticketed for marijuana in New York City are people of color—despite the fact the drug use rates are similar across racial groups. This suggests that drug enforcement looks different in white communities than it does in communities of color. Police claim that this is because it is low-income communities of color that request their help. But this ignores the fact that for decades these communities have also pleaded without success for the jobs and health care services that would be more effective in reducing the illegal drug trade in their neighborhoods.

Meanwhile, large-scale drug trafficking continues without interruption because almost all of the law enforcement focus is on low level street dealing. Even when a higher level dealer is arrested, it merely results in a shifting of the players with no measurable effect on the basic functioning of the illegal drug trade.

New York City has already taken important steps to change course. Stop-and-frisk policing has been curtailed. Radically fewer people are being arrested for low-level marijuana offenses after a new policy adopted by the de Blasio administration last fall (though, troublingly, people of color remain the overwhelming targets of the thousands of arrests that still happen). And the city is developing new behavioral and mental health initiatives that prioritize health and social assistance instead of incarceration for people struggling with substance use or mental illness.

The new New York City Office of Drug Strategy would be tasked with bringing together numerous local agencies – from the health department to the police, homeless services, welfare, and more – to assess existing approaches and develop new ones based on systematic evaluation of what works to make individuals and communities healthier and safer. The office would produce annual progress reports and work closely with an advisory board made up of public officials, academic experts, service providers, and people with personal experience of drug use.

Council Member Johnson's bill makes clear that this new office would adopt a harm reduction approach to protecting health and public safety with the goal of reducing the morbidity, mortality, and crime, as well as inequities, stemming from past or current policies. This means that part of the office's work will be to overcome the negative effects of criminalization in poor communities of color, which too often drive people away from education and opportunity and toward violence, criminality, and prison.

Individuals, families, and communities need help dealing with very real problems stemming from drug use. It's time that the city takes seriously the need for a broad range of strategies based on research and experience. We know that these harms can be addressed if we have the political will and resources. A new Office of Drug Strategy could go a long way toward generating both.

***
Alex S. Vitale is Associate Professor of Sociology at Brooklyn College and author of City of Disorder: How the Quality of Life Campaign Transformed New York Politics.