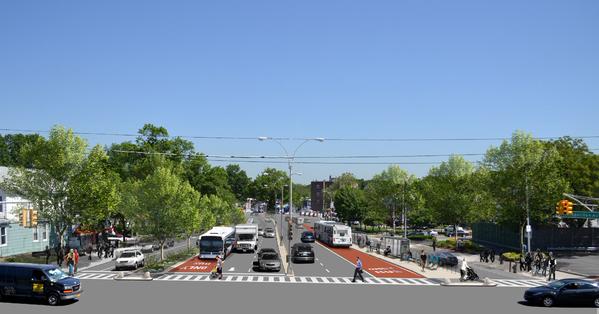 Last week, an op-ed appeared on these pages in which the author, Allan Rosen, slammed the proposal for Bus Rapid Transit (BRT) along Woodhaven and Cross Bay Boulevard. Woodhaven is broken for all road users right now, and we cannot afford to stick our heads in the sand and do nothing to make it safer and more efficient for everyone.

As a member of Queens Community Board 5 and a Glendale resident, I was disappointed by Mr. Rosen's op-ed where conjecture was passed off as truth, and scaremongering was embraced in a concerted effort to stymie much needed transit improvements.

Mr. Rosen's op-ed trots out the same arguments made by the Queens Public Transit Committee, members of which advocate for the reactivation of the Rockaway Beach Rail Line. For a group that has public transit in its name, members are consistently opposed to any transit plans that mean better bus service. Rail and bus along Woodhaven are not mutually exclusive. But in the time it takes to secure the funding needed to merely start an environmental study on the rail line, BRT could be rolling up and down Woodhaven Boulevard.

Mr. Rosen, a former director of Bus Planning for MTA New York City Transit, falsely claims BRT will make Woodhaven Boulevard more congested. The BRT plan will normalize traffic patterns on Woodhaven and reduce conflicts between vehicles. A smoother flow of traffic will increase the capacity of the road.

Mr. Rosen claims safety problems along Woodhaven are "exaggerated." The numbers don't lie. According to a Tri-State Transportation Campaign study, Woodhaven Boulevard is the most dangerous street in Queens. The Boulevard is the second most dangerous road in the city. Between 2010 and 2012, eight people were killed by crashes. Mr. Rosen's claims are not supported by clear-eyed data.

I have young and elderly family members who cross Woodhaven on a daily basis. Safety for the most vulnerable road users should be more important than the perceived convenience of single occupancy vehicles. We should have a robust discussion about the best transit options for Central Queens, but for someone who doesn't live in the borough to downplay the threat posed by Woodhaven Boulevard is questionable, to say the least.

Moreover, given the desperate need for better transportation infrastructure in Queens, it is especially inappropriate to live elsewhere and argue that Queens ought not advocate for resources in deference to Manhattan.

I have been to many DOT public workshops, and have been struck by planners' interest in hearing from people who use Woodhaven every day. I've seen changes made to the plan in response to concerns from residents, and been impressed with the thoughtfulness and thoroughness of the process.

Select Bus Service has proven to be a success in corridors across the city. DOT's plan to implement BRT service on Woodhaven will make the corridor more livable for all users - as long as the shortsighted naysayers don't get their way and condemn tens of thousands of bus riders to the harm of ever more unreliable service.

***
Toby Sheppard Bloch is a Glendale Resident and member of Queens Community Board 5.