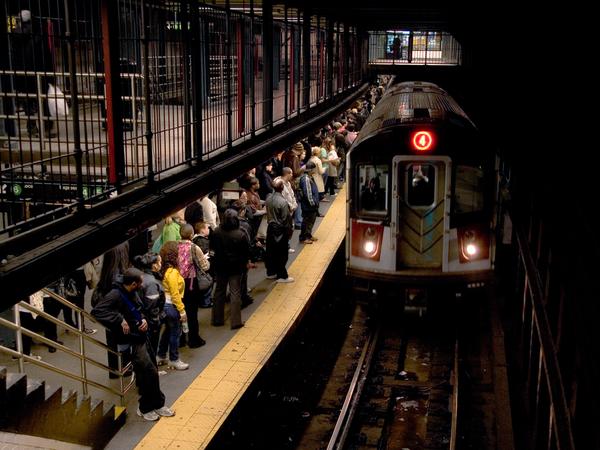 Riders board the 4 (photo via Crain's)

As another tumultuous Albany session came to a close and our legislators bickered about rent regulations, 421-a, and mayoral control over New York City schools, there was one critical piece of the legislative puzzle conspicuously missing – funding the MTA capital program.

While the constituencies to renew expiring rent regulations (over two million) and extend mayoral control (over 1.1 million public school students) are strong, the key piece holding those two issues together are the nearly six million daily subway riders, many of whom use the system to get to school and home. They will be the people who pay the price for Albany's inaction as they suffer the impacts of train delays, overcrowding and much-needed expansion projects that won't see the light of day, like the next phase of the Second Avenue Subway.

Our subways, buses and commuter rails keep us moving and power the economy. With a physical asset value that tops $1 trillion, the MTA truly is the state's economic development catalyst. How the State could turn its back on a trillion dollar asset that carries nearly nine million riders a day is puzzling, to say the least.

Without a fully funded MTA capital program able to finance needed infrastructure repairs and improvements, several expansion projects to accommodate population growth and surging ridership will be put in jeopardy, including Penn Station access. In addition, contracts for expansion projects under the current MTA capital program may be in limbo. New train cars and station improvements will become a fantasy, not a reality. Every day our trains and buses run, they wear down a little more. If not properly maintained or replaced they break, possibly in a catastrophic way, and cause a ripple effect throughout our economy, sidelining workers, crippling businesses, hobbling neighborhoods, and shaking the very prosperity of the region - and the source of the tax revenue that supports the rest of the state.

Albany's culture of neglecting the MTA has never been more apparent as legislative leaders left town without acknowledging the existence of our region's economic lifeline - a travesty for the city, the metropolitan region, and the state. The message that Albany is sending is clear: go look for jobs and live elsewhere. So for that, we give Albany "a failing grade."

***
by Denise Richardson, Executive Director of the General Contractors Association of New York