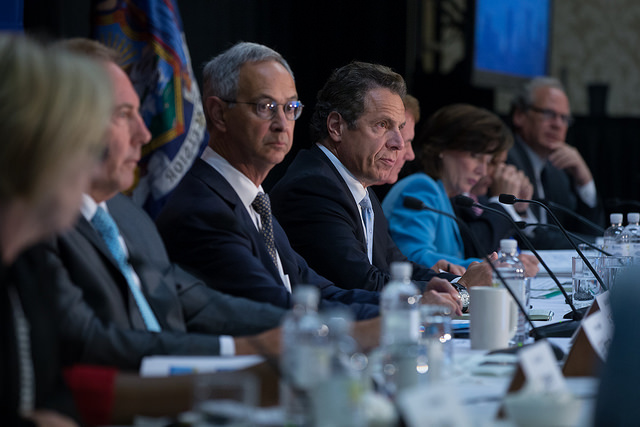 Gov. Cuomo (photo via the governor's office on flickr)

New York City's homelessness crisis has blemished Mayor de Blasio's progressive track record, and rightfully so. While Mayor Bloomberg made our city the capital of homelessness in the United States, Mayor de Blasio, now in his second year, must take responsibility and meaningfully address the problem.

Although the reduction in shelter numbers from 60,000 to 56,000 is certainly progress, it is woefully far from a bold vision for "ending the tale of two cities" and ensuring access to truly affordable housing for poor and low-income New Yorkers.

But to be fair, it's hard for the mayor to have a bold vision when the governor blocks him at every turn.

Governor Cuomo has refused to fully fund homelessness services, or even work with New York City to make existing public assistance and shelter programs to house the homeless more effective. Instead, the governor has used the homelessness crisis as a political opportunity to slam the mayor, while his own office continues to worsen the problem.

In fact, Governor Cuomo's recent rhetoric invoking the reemergence of the "bad old days" when discussing Times Square is actually a reflection of his own political decision to not fully fund supportive housing in his last budget or meaningfully reform laughably low public assistance shelter grants.

The governor has also refused to contribute state dollars to innovative housing subsidy programs developed by the city's Human Resources Administration (HRA), leaving the city to foot the entire bill, thus limiting its reach. As a result, New York's homeless and people who are nearly homeless, including those in need of mental, physical, and behavioral health services are left with no option other than the streets.

The reality is that both Mayor de Blasio and Governor Cuomo should be doing more to address the city's record homelessness. Advocates and public policy experts have shown them solutions that they both have yet to adopt. Instead our mayor and governor have opted for political expediency over good public policy and finger-pointing over asserting leadership.

Mayor de Blasio must demand more dedicated housing for the homeless from developers reaping massive profits through tax subsidies and land deals. This could be accomplished if New York City's Department of Housing Preservation and Development (HPD) required a baseline of 10 percent of units to be set aside for the homeless for development projects that benefit from public resources. The developers would still make staggering profits and the city could remedy the scarcity of affordable housing units by not giving away land and money to wealthy developers that get rich off gentrification and displacement. The city should also require current developments and NYCHA to commit many more existing units to house homeless New Yorkers.

On the state level, Governor Cuomo must fully fund supportive housing, known as the NY/NY IV agreement, and work with city agencies to make homeless housing vouchers, funded by both the city and state, as effective and well-resourced as possible.

There is little doubt that the Governor could get the necessary funding for supportive housing in his upcoming budget (of course, getting the job done last year would have been better), and his own state agencies already have the power to work more effectively with city agencies if they were directed to do so.

Governor Cuomo's task is far easier than Mayor de Blasio's – which is all the more reason to characterize the governor's inaction as anything but political posturing to weaken the mayor.

We have the solutions, now we need our top elected officials to put aside the politicking and blame-shifting and take the steps to finally end this awful homelessness crisis.

***
Alyssa Aguilera is the Political Director of VOCAL-NY, a grassroots community organizing group, which is a member organization of the Homes for Every New Yorker campaign.

Have an op-ed idea or submission for Gotham Gazette? E-mail editor Ben Max: This email address is being protected from spambots. You need JavaScript enabled to view it.