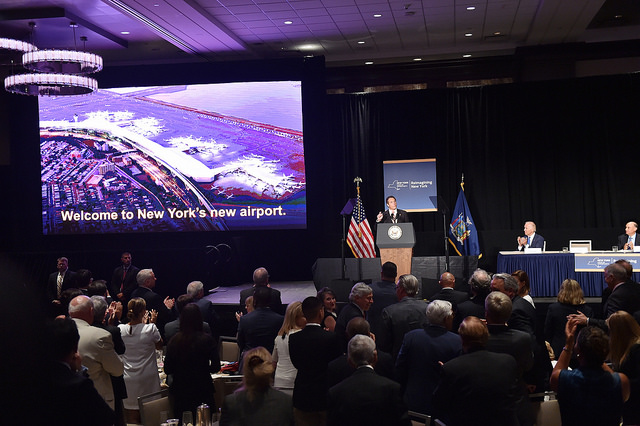 In Silicon Valley, the technology industry regularly releases new hardware and software to eager customers. Tech companies are also known for announcing vaporware; products that receive a great deal of favorable publicity but are never actually manufactured or officially canceled. In New York, we've been hearing praise for something along those lines, a project that we refer to as the LaGuardia VaporTrain.

Since Vice President Joe Biden's remarks last year that LaGuardia Airport is reminiscent of "a third-world country," there has been a great deal of coverage of its proposed overhaul. In January, Governor Andrew Cuomo announced that a new $450 million Air-Train would connect LaGuardia with both the 7-train subway line and the Long Island Rail Road in Willets Point next to Citi Field.

This summer, Biden and Cuomo said that as part of a $4 billion overhaul, LaGuardia will essentially be torn down and rebuilt. A new central terminal will be constructed and two miles of new taxiways will lead to shorter and fewer gate delays. The governor said "best of all, it's not a plan, it's not a sketch, it's not a dream, it's not a vision...it's actually happening."

The media has been reporting that the metropolitan area's third busiest airport is finally going to get what Newark and JFK already have: a connection to the region's rail system. But, reporters haven't been reading the fine print.

When the governor and vice president announced the $4 billion project for the new and improved LaGuardia, it did not include any funding for the AirTrain. Instead, the state's documents indicate that the AirTrain will be designed to incorporate a future AirTrain terminal. That's a little bit of wishful thinking, like saying that the garage in your new home will be designed to accommodate a Ferrari.

State officials have not released any AirTrain details that would allow us to determine whether the proposal is a good or a bad idea. However, there are some good reasons to be skeptical about it.

The Project Will Be Expensive and Offer Limited Benefits
Considering the costs of other recent transportation projects in the region, a LaGuardia AirTrain will certainly cost more than $450 million. The project will include two airport stations and an elevated rail line to connect them. The Port Authority will need to install tracks, signals, and systems for power and communications. It will also need to purchase AirTrain vehicles and then construct a maintenance facility at or near the airport to maintain them. Although MTA chairman Thomas Prendergast doesn't like to second guess the governor in public, he did tell state legislators that the project would probably cost more than the governor's estimate.

The benefits of the project are questionable. For most travelers, taking the AirTrain will not be faster than the buses, shuttles, and taxis that currently serve LaGuardia. Travelers heading to Manhattan on the 7 train will have to first stop in Queens at 111 Street, 103 Street, Junction Boulevard, 90 Street, 82 Street, 74 Street, 69 Street, 61 Street, 52 Street, 46 Street, 40 Street, 33 Street, Queensboro Plaza, Court Square, Hunters Point, and Vernon Boulevard.

The express train on the 7 line, which runs during non-peak periods, isn't much faster. It stops at six stops before reaching Manhattan. Another weakness with the project is that once air travelers do reach Manhattan, many of them will have to transfer for another train at Grand Central or Times Square to reach their final destinations.

While a taxi ride from LaGuardia to midtown Manhattan typically takes 20 to 35 minutes, a train will take much longer. Just the portion of the trip on the 7 line will take 25 to 30 minutes. It is possible, though, that during especially bad traffic, people with final destinations in Times Square or the Jacob K. Javits Convention Center would find the AirTrain to be faster.

Although the 7 travels through some wonderful neighborhoods, most air travelers are not likely to find the trip very pleasant. The 7 is one of the nation's most crowded subway lines and when travelers do get off the subway in Manhattan, they will have to navigate stations with multiple levels that were not designed for people carrying luggage.

The other option for LaGuardia's AirTrain passengers will be the Long Island Rail Road at Willets Point. But, that may not offer a faster trip than the subway. Although the railroad trip is less than 20 minutes to Penn Station, service on the LIRR branch that serves Willets Points runs only every half-hour during off-peak periods. That is much less frequent than the service the railroad provides for JFK AirTrain customers at Jamaica Station, a location where multiple LIRR lines meet.

When travelers choose whether or not they will use the AirTrain (if it is actually built), they will consider travel costs as well as time and comfort. Assuming that the fares are similar to those for other airport customers in the New York area, the LaGuardia AirTrain connection using the railroad will cost between $11 and $13.25 in today's dollars. That is similar to the $13 cost of a shuttle bus, but more than the $2.75 it now costs travelers who access the airport via a subway and an MTA bus.

If the AirTrain does not offer a savings in time, comfort or cost, it is unlikely to attract a large number of airport customers. LaGuardia's proximity to Manhattan -- it is only 4 miles away -- tends to attract business travelers who will prefer paying for a $31 taxi ride that gets them to their destinations faster and less frazzled.

Someone Has to Pay for It
The money to build and operate a new AirTrain has to come from somewhere. The transportation agencies do not have enough resources to pay for the projects already in their pipelines, let alone a new one. That means they have two choices. Either postpone another project or find additional revenues such as by raising tolls, airline fees, or increasing the subway and PATH fares.

The Port Authority could postpone its fledgling plans to fix another critical entry to the city – the 42 Street Bus Terminal – which serves about three times as many daily passengers as LaGuardia. Elected officials will need to consider which is a higher priority: providing a new rail service that would be used by several thousand daily air travelers or improving the bus terminal which is used by over 230,000 weekday passengers.

Setbacks for Previous Plans
Cuomo's plan for an AirTrain is not the first plan for a rail connection to LaGuardia and may not be the last. In 1994, the director of the Port Authority airport access program said about a rail connection to LaGuardia, "The AirTrain is going to get built." He explained "No one thinks you can build anything like this in New York anymore. But they're wrong."

In 1994, the AirTrain was planned to extend from LaGuardia to the Queensboro Bridge where it would cross the East River on the 59 Street Bridge. That idea died because former Mayor Rudy Giuliani was suspicious of any Port Authority idea and because he didn't think it made sense to take a lane away from cars and trucks on the bridge.

Instead, Giuliani preferred extending the subway line (what is now the N train) to LaGuardia Airport. He wanted travelers to be able to take a train directly from the airport to Midtown and Lower Manhattan destinations without having to transfer trains. Transportation planners refer to this as a "one-seat ride."

But Giuliani's idea died because residents in Astoria, where the subway line currently terminates, came out in force against it. The speaker of the New York City Council at the time, Peter Vallone Sr., just so happened to come from that neighborhood.

Before the governor and the transportation agencies make any decisions about LaGuardia, we hope they provide the public with detailed cost estimates, anticipated ridership numbers, expected travel times, and a financial plan. Right now, we can't tell you whether or not it makes sense for the Port Authority and the MTA to build it, but we can tell you that we're hoping to learn more - much more - about it.