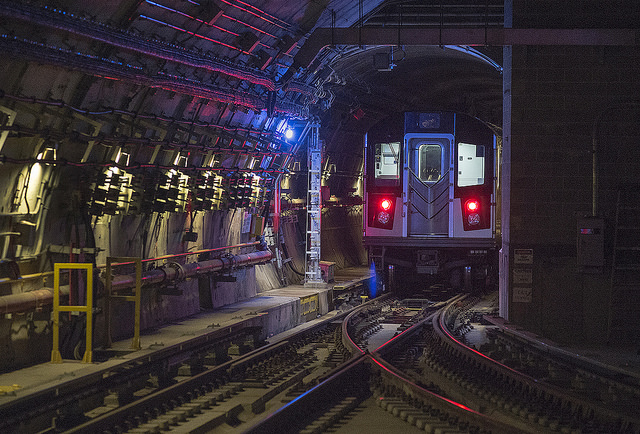 Down a dark tunnel (photo: MTA/Patrick Cashin via flickr)

The big news is that Governor Cuomo and Mayor de Blasio have stopped fighting over who should pay what, and reached a deal to close a huge gap in the MTA's vital $26 billion five-year capital plan. But their story of political conflict and compromise obscures a crucial fact: it's not their money, it's ours. Going forward the public has the right to know exactly what the governor and mayor intend to borrow and spend in our names.

Fully funding the MTA is a must, but New Yorkers are going to be stuck with the bill for the new subway trains and buses long after the governor and mayor have moved on. We need to know what they are getting us into.

So far, Governor Cuomo has refused to reveal a specific funding source for his pledge of an additional $8.3 billion, saying only that the money is coming from "state sources." Based on the State's available sources of funding and borrowing, this means it is highly likely that the State will create a mountain of new debt that the MTA and transit riders will be ultimately responsible for.

The governor has said he does not want to raise new taxes and will not push for the Move NY road pricing plan. The State's bank settlements are already spoken for, and the General Fund will not have anywhere near $8.3B in cash to spend on the MTA over the next four fiscal years, especially if Upstate demands equal funding for its roads and bridges. That leaves borrowing.

The State does almost all of its borrowing by getting public authorities, like the MTA, to borrow on its behalf. The State does this to avoid debt limits and public votes. Therefore, by far the most likely way Governor Cuomo will pay for his $8.3B pledge is by having the MTA borrow the money by selling bonds which the State will pledge to pay for. This is called a "service contract bond."

The key thing about service contract bonds is that the State's commitment to pay for them is not legally binding, and the MTA and transit riders are ultimately responsible for paying bondholders if the State reneges on its commitment. If the state does renege on some or all of the promised payments, the MTA and transit riders could be left holding a very large bag: paying back $8.3B in bonds will cost roughly $500 million a year for 30 years.

Admittedly, this is a modest amount of money given the MTA's giant budget, but it shows how easy it is for a Governor to break an old promise. If the Governor is reneging on debt payments in today's prosperous times, what happens during bad times over the next 30 years?

Government transparency can be an abstract idea, but for transit riders it really matters right now. The MTA will borrow billions more to pay for its share of the capital plan, and its debt payments are already a dangerously high share of its operating budget. This debt has translated into more expensive MetroCards and an increasing burden on everyday New Yorkers.

The stakes are high and New Yorkers deserve to know from Governor Cuomo, Senate Majority Leader Flanagan and Assembly Speaker Heastie what the risks and benefits are of service contract bond borrowing and other financing options for the MTA capital plan --- after all, it is our money.

***
John Kaehny is the executive director of Reinvent Albany.