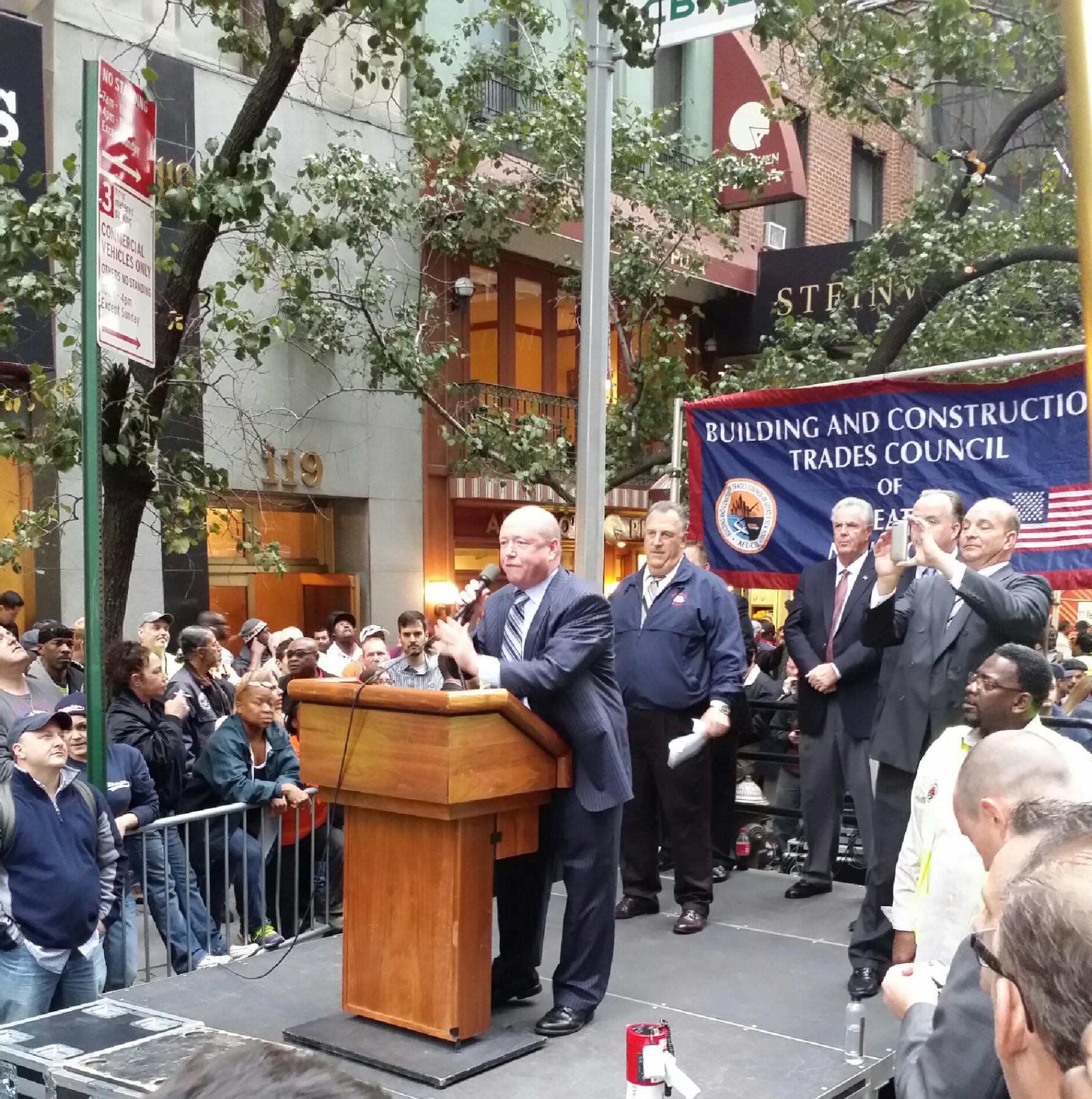 Pat Dolan, the author, at a rally

Governor Andrew Cuomo has just announced an initiative to combat worker exploitation in New York, including investigations focused on employers who are serial offenders, along with the creation of a hotline for reporting worker abuse.

At the first public meeting of the New York Task Force to Combat Worker Exploitation, on October 14, abused workers came forward to give firsthand accounts of living lives in virtual serfdom for employers giving little consideration towards abiding by our state laws, safety or wage mandates.

The ten-agency task force will coordinate data collection, investigations, prosecutions, and compliance, as well as outreach and education with workers and employers, made possible with a $700,000 state allocation.

The findings will shed light on the widespread mistreatment of workers, especially within New York's construction industry, which accounts for less than four percent of statewide employment but 20 percent of the state's occupational fatalities. 3

At the first public hearing, five workers testified about abuses they have suffered on their worksites including racial discrimination, sexual harassment, wage theft, assault, and lack of worker's compensation for when they are injured on the job.

In his more than 13 years with his employer, Mr. Turner testified that he never received safety or industry training and admitted many of his co-workers had been injured on the job. He recalled an instance when his supervisor threatened to fire him if he didn't return to work immediately after receiving an on-the-job injury to one of his fingers that necessitated medical treatment.

According to the U.S. Labor Department's report, Adding Inequality to Injury: The Costs of Failing to Protect Workers on the Job, it is estimated that worker's compensation covers only 21 percent of workplace injury and illnesses. Costs are then primarily footed by employees, their families, and their private health insurance (63 percent), while taxpayers are socked with 16 percent of the tab. But what if your employer provides no healthcare coverage, as is the case with many of these workers?

In construction, falls are the most common cause of serious workplace injuries and comprise half of fatalities in New York State. This occurs in spite of federally-mandated rules requiring safety equipment on worksites including harnesses and safety lines, nets, guard and stair rails. In 2012, 79 percent of fatal fall accidents occurred at non-union construction sites and 60 percent of victims were immigrant and/or Latino, according to the New York Committee for Occupational Safety & Health (NYCOSH).

Another non-union construction worker, Carlos, testified with only his first name, fearing vengeance from his employer after coming forward with stories of assault and wage theft. During Hurricane Sandy, he worked for a contractor at a federal building for 12-14 hours per day without ever seeing a dime. "When you complained about that, they would retaliate against you," he said. The punishment? Taking employees off the work schedule for days, even weeks at a time.

These are some of many tactics used to threaten and intimidate employees in New York's growing and seedy underground construction economy. Those who testified told of scraping by on wages as little as $5 per hour while working 50-60 hour weeks, with no healthcare protection should they become sick or seriously injured on their job site. Many are kept silent by the threat of losing their meager earnings, which can be the difference in providing a hot meal for their families or making rent payments.

The governor's new effort to battle rampant worker exploitation should not be a brief, formulaic exercise. When it is becoming more the norm for workers across our city to be forced to work on dangerous construction sites ten or 20 stories above street level without basic safety gear or training, or perhaps earning half of minimum wage, it's truly time to reexamine what our priorities are. The Governor's Task Force to Combat Worker Exploitation is welcome and necessary.