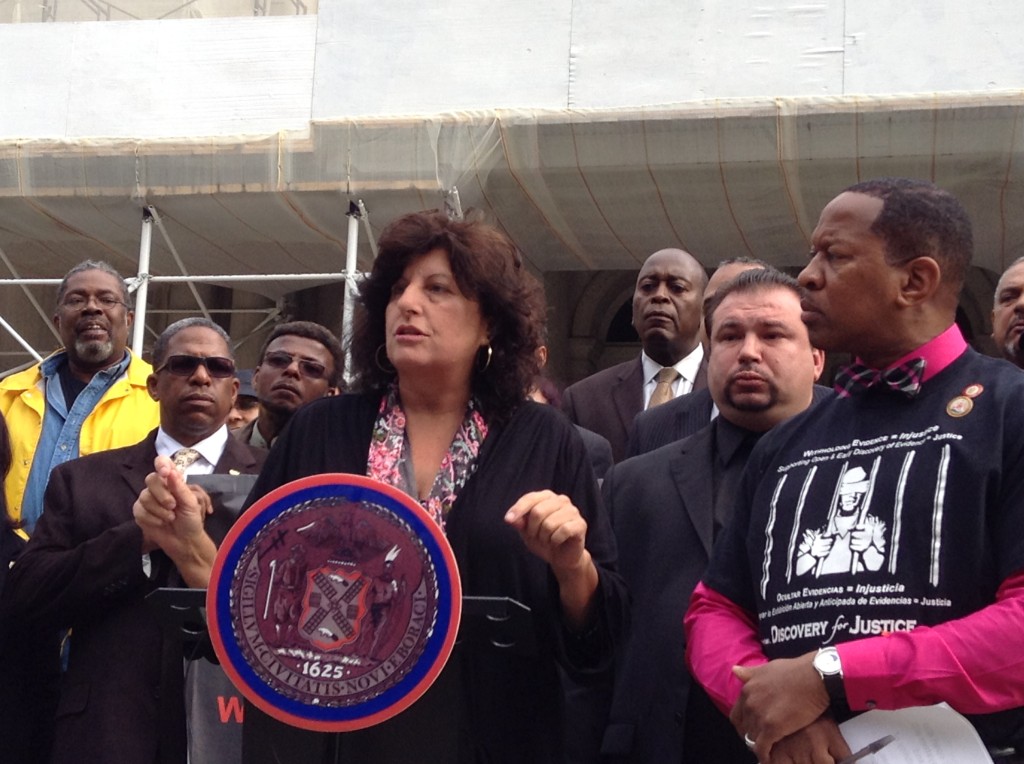 The author at a rally

As New Yorkers, we are all deeply saddened by the recent death of NYPD Officer Randolph Holder. But as we mourn and seek answers to this tragedy, we must not repeat the mistakes of past decades and allow retributive impulses to supersede evidence-based approaches to public safety.

People in drug diversion programs return to the community, as do 95 percent of people sent to prison. However, unlike incarceration, diversion successfully addresses some of the root causes of crime. Rolling back diversion programs that have increased public safety and lowered prison and jail populations would be a dangerous mistake and send a signal to policymakers across the country that New York is bound by the politics of fear.

As a public defender in Brooklyn for more than thirty years, I have seen firsthand the devastating effects of the combination of failed drug policies, disproportionate sanctions and mandatory minimums.

By the 1980s, it was becoming clear to public defenders, district attorneys, and judges alike that incarceration of poor people of color was not making our neighborhoods safer. Instead, it ensnared entire communities in an epidemic of criminal justice involvement, leaving untold numbers of New Yorkers—the vast majority low-income people of color—with the enormous burden of criminal records, in addition to the unmet mental health needs, untreated addiction, cyclical poverty, and multi-generational trauma that likely precipitated their arrests.

In Kings County we did not wait for reform of ineffective laws and decided to do something different— creating diversion programs beginning in the late 1980s and early '90s to allow defendants to enter drug and mental health treatment to address the conditions that prompted the criminal behavior in the first place. The theory was, and still is, that high quality diversion programs and treatment courts for the adjudication of cases for appropriate candidates would keep us safe, save money, and promote confidence in a troubled system. Support for these programs among politicians has varied over the years, but their success has always been validated by statistical evidence.

The point of diversion is public safety. We know that people who are given the opportunity to get clean, find stable housing, develop work skills, and avoid the collateral consequences of a conviction are much less likely to re-offend. In New York City, people who complete drug programs have a 36 percent recidivism rate, as compared to 54 percent for those sentenced to prison, jail, probation, or time served, according to a 2015 report by the Vera Institute of Justice.

To be sure, drug treatment and other court mandates can never address all of the reasons that people commit crimes. Likewise, because the success of these programs is contingent on defendants continuing to live in the community, there is an inherent risk that a small number of individuals will not comply with the mandates of the court. Incidents like Detective Holder's death, though tragic, are extremely rare. In fact, a 2000 study of diverted felony drug offenders showed that they pose no more of a risk to public safety than those traditionally prosecuted.

Brooklyn Defender Services handles over 45,000 cases a year; nearly 2,000 of our clients benefit from specialized treatment courts in Kings County annually. Two clients, Mark and John (names changed to protect their identities) have cases that are illustrative of the important role that alternatives to incarceration play in promoting public safety and helping people to improve their lives and those of their families and communities.

John, arrested in an undercover drug sale, has cognitive limitations. He accepted a conditional plea that included connection with services from Brooklyn Forensic Link, a program that assists severely mentally ill offenders each year with treatment and related transitional services. With the support of Brooklyn Forensic Link, he completed the terms of his conditional plea within six months and now receives much-improved access to services to help him navigate the city despite his disability.

Another client, Mark, was arrested for breaking into stores to steal money to support his heroin habit. Mark's case was transferred to drug court. He has already completed the inpatient portion of his treatment, is currently participating in outpatient treatment, now holds a job in construction, and recently became engaged to be married.

Their stories of success are repeated thousands of times each year. Yet I remember a time when Mark and John would have had no options other than incarceration, without the benefit of programming to prevent future contact with the criminal justice system.

Those who forget the past are doomed to repeat it. While we still have far to go, New York has taken important steps towards criminal justice reform. Safe and effective use of diversion programs began in Brooklyn and later served as the blueprint for reforming the Rockefeller Drug Laws in 2009. These programs reduce crime: arrests are down and fewer people are spending unnecessary time in jail or prison.

There is no doubt that the death of Randolph Holder deserves thoughtful pause. We are New Yorkers—thinkers and doers. We dishonor Officer Holder's service if we roll back hard-fought reforms that have made New York safer for everyone. The proposals urged thus far—fragmented bail reform, limiting access to diversion and adjustment of the sealing statutes—will not prevent future tragedies. Instead, they will hurt the thousands of New Yorkers who already suffer the most—poor people of color and the communities in which they live and work.