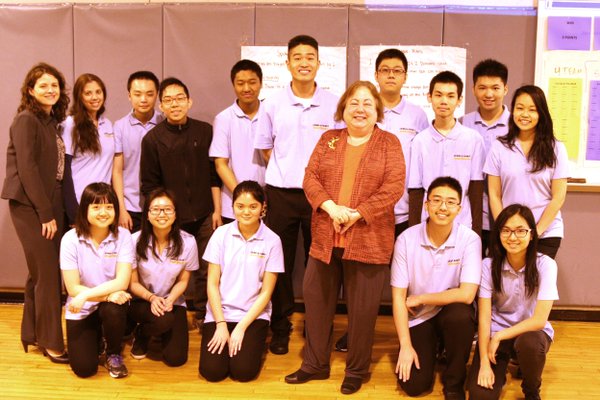 Sen. Krueger, the author, visiting a school (photo via @LizKrueger)

In October, Governor Cuomo stood alongside former Vice President Al Gore and reiterated his commitment to reducing New York's carbon emissions 40 percent by 2030, as well as his willingness to phase out New York's coal-fired power plants. These were laudable statements in a high-profile public forum. Unfortunately, these goals will remain out of reach as long as the state continues to send the wrong market signals by requiring New Yorkers to underwrite dirty and uneconomical coal plants through increased electricity bills.

With just weeks left before global climate negotiations begin in Paris, now is the time for the Governor to make an enforceable commitment to phasing out coal-fired power by the end of the decade and ensuring a just transition for workers and communities dependent on coal.

New York's four remaining coal-fired power plants – Cayuga, Dunkirk, Huntley and Somerset – contribute 13 percent of New York's electricity sector carbon pollution. They no longer make a profit, yet the state has been keeping them operational at a cost of hundreds of millions of dollars.

The Dunkirk plant has received $90 million to continue operating through the end of 2015, and the Cuomo administration approved up to another $200 million over the next ten years; the Cayuga plant is receiving $155 million to continue operating through 2017, and has recently asked for an additional $145 million. These costs are paid for by local electricity customers, with plant owners pocketing the profits. Yet according to the utilities National Grid and NYSEG, transmission upgrades, many of which will be needed regardless of whether the coal plants remain operational, could address reliability issues at significantly lower cost when the plants close.

Taking these plants off-line will get us one third of the way to the state's carbon reduction goal while safeguarding the thousands of New Yorkers threatened by dangerous coal-fired pollution. But the state is currently sending market signals that directly contradict the Governor's emission reduction and renewable energy goals.

Coal plant owners are coming to expect that they can rely on New York's energy customers to keep their outdated and unnecessary plants on life support, a fact made clear by the recent request from Beowulf Energy to purchase Cayuga and Somerset. Time after time our government has required New Yorkers to foot the bill for dirty energy rather than investing in transmission upgrades that could get ahead of the curve on local reliability issues at a fraction of the cost.

New Yorkers are ready to pitch in to help transition away from coal. There is strong public and political support for a responsible transition plan for coal reliant communities - one that would require only a small portion of the money currently being spent. Earlier this year I joined over one-third of New York's legislature in signing a letter, authored by Assembly Member Barbara Lifton, urging Governor Cuomo to end coal subsidies and create a thoughtful statewide transition plan. Next, we will rally with elected and other allies, including the Sierra Club, as we continue to push for a smart, responsible path forward.

We are nearing a tipping point when it comes to the damage we're doing to our climate. As we approach the United Nations Conference on Climate Change in Paris, New York is poised to be an international leader in the fight against climate disruption. If we stop clinging to policies that keep our energy sector stuck in the past, the Empire State has the potential to lead the world in the bold transition to a clean energy economy. Governor Cuomo could lead us there by speeding up his commitment to phase out coal-fired power and taking a key step toward ensuring carbon pollution becomes a thing of the past.

***
Liz Krueger is a State Senator representing Manhattan. She is on Twitter @LizKrueger.