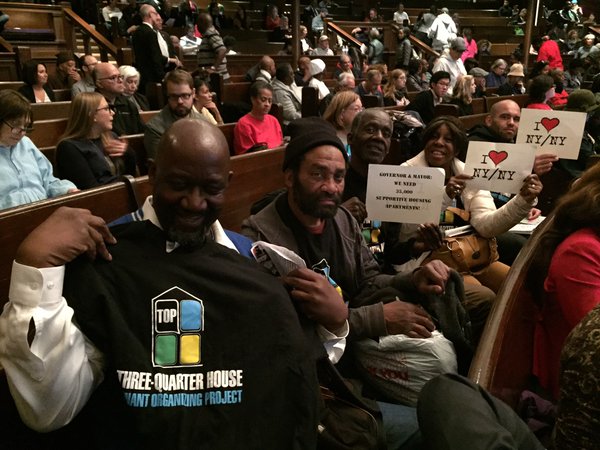 At a recent NY/NY event at New York Society for Ethical Culture, via @TOPnyc

I usually approach the New York Society for Ethical Culture, where I serve as clergy leader, from Central Park West and look across the street from the park at the words carved into stone on the corner of our meeting house: "Dedicated to the ever-increasing knowledge and practice and love of the right."

Today "the right" is used to identify a socially conservative political stance, but in 1910, when these words were inscribed, it referred to ethics and a community determined to do the right thing in challenging times. Since founding the Society in 1876, members have sought ways to make the world a better place for everyone, beginning with improving living conditions in tenement housing and forming settlement houses that built affordable housing.

Nearly 140 years later, we still live in challenging times and continue our commitment to treating the homeless as our neighbors and working for affordable housing. Today, we have many partners in the Interfaith Assembly on Homelessness and Affordable Housing. In addition to providing shelter for homeless women for over thirty years, the Society hosts events that gather advocates from across the city and state to work in concert for affordable housing.

The latest event, held on October 23, "Campaign 4 NY/NY Housing," called upon Governor Cuomo and Mayor de Blasio to work together and with the more than 200 state and local organizations calling for 30,000 new units of supportive housing over the next ten years for our most vulnerable neighbors: the homeless, now about 60,000 people who sleep in city shelters or on city streets every night. This statistic includes over 14,000 families with nearly 24,000 children; and it has reached the highest levels since The Great Depression of the 1930s.

How did this happen? Research compiled by the Coalition for the Homeless from data collected by the city Department of Homeless Services and Human Resources Administration shows that the primary cause of homelessness is lack of affordable housing, triggered by eviction and job loss, severely overcrowded and hazardous housing conditions, domestic violence, and serious mental health disorders. This social "perfect storm" has put a strain on the resources of private and public organizations throughout the city, especially in Manhattan, which holds nearly 60 percent of our unsheltered homeless.

How do we address this community reality? Mayor de Blasio, whose administration recently announced a plan to create 15,000 supportive housing units over fifteen years at a cost of $3 billion, will face pushback from neighborhood leaders who oppose the siting of those units. But, it is absolutely essential. Negotiations with Governor Cuomo over a new "New York/New York" deal, the much-anticipated fourth city-state supportive housing plan, are at an impasse. Local advocates, including we clergy in the Interfaith Assembly, are frustrated with the de Blasio-Cuomo feud and have written to both politicians imploring them to stop playing politics and start acting like the leaders we elected them to be. This is an ethical issue that demands immediate and non-egotistical action.

In the meantime, how can we be the good neighbors that so many of us want to be? NYPD Commissioner Bratton has urged New Yorkers not to give money to homeless people living on the streets, and Mayor de Blasio has said that the best way to help is to donate to nonprofit organizations serving homeless people. I agree, we should donate to shelters and organizations, and I hope that more people will volunteer at shelters, including ours. But I see no harm in making a direct and personal donation to individuals. Offering money can be awkward, but offering a piece of fruit, a wrapped sandwich, or a coupon to a restaurant is appreciated. We can also provide information about local sites that offer meals and hot showers. Interfaith Assembly on Homelessness and Housing offers a helpful resource that can be referenced, printed, or circulated by email or on social media.

The most important way of helping is to see others as people worthy of dignity and respect. Bear in mind that many people who live in shelters are employed, but their income isn't enough to cover housing; they are not lazy and useless.

When I leave the Society for Ethical Culture's meeting house, I always stop to read at least one passage from the "sacred" text mounted on the north wall of our lobby: the Universal Declaration of Human Rights. It is a document that set out, for the first time, fundamental human rights to be universally protected, and was proclaimed by the United Nations General Assembly in Paris on December 10, 1948, in the wake of World War II.

Today I read very closely Article 25(1): "Everyone has the right to a standard of living adequate for the health and well-being of himself and of his family, including food, clothing, housing and medical care and necessary social services, and the right to security in the event of unemployment, sickness, disability, widowhood, old age or other lack of livelihood in circumstances beyond his control."

No doubt some New Yorkers have become numb to seeing homeless people on our streets. Homelessness in our city has nearly doubled in the last decade, and "compassion fatigue" can occur, especially if we feel there is nothing we can do to make a difference. But when we acknowledge our common humanity, encounter people with an open heart and gentle words, educate ourselves about the resources available in our communities, and resolve to act, we can make a real difference in the lives of our neighbors.

***
Dr. Anne Klaeysen is a Leader of the New York Society for Ethical Culture.