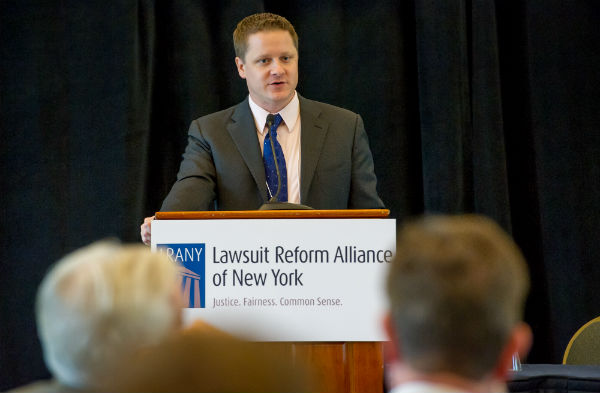 For decades it was an open secret in Albany that the New York Assembly was functionally controlled by the trial lawyers. Sheldon Silver, the former Assembly Speaker, was known to have a lucrative "of counsel" position with the powerhouse trial lawyer firm Weitz & Luxenberg, and most Albany insiders believed that Mr. Silver would not do anything to jeopardize that income. Governor Cuomo himself stated that the trial lawyers were the "single most powerful political force in Albany," no doubt in partial reference to Mr. Silver's position as an employee at a trial lawyer firm.

With the trial and subsequent conviction of Mr. Silver on corruption charges, we now know that the former speaker did virtually no real legal work to earn his "of counsel" income. What he did do was carry the legislative water for the trial lawyers, and we as New Yorkers are left with a state ravaged by lawsuits and litigation.

New York has the highest medical liability payouts in the nation, by a wide margin – even higher than California, which has nearly five times the population. The difference is that California passed meaningful reforms to control medical liability costs, reforms that had no chance in Sheldon Silver's Assembly.

These runaway medical insurance costs are more than a financial issue, they are also an issue of access to healthcare. Hospitals across New York City have been closing at an alarming rate, in large part due to the cost of medical liability insurance. Some hospitals are "going naked" and foregoing insurance entirely, just to keep the doors open. The access to care issue extends upstate as well – at least eight New York counties have no OBGYN services at all.

New York also has the highest construction insurance costs in the nation, due to the odious so-called "Scaffold Law," which Mr. Silver cravenly defended.

The oddly-named law has little to do with scaffolds. What it does is hold contractors and property owners absolutely liable in a lawsuit for workers' injuries even if, in the words of the court, they had "nothing to do with the plaintiff's accident."

New York is the only state to apply absolute liability to contractors. In 2014, Mr. Silver proudly shut down Scaffold Law reforms that would have put our legal system in line with the rest of the country by creating a standard where negligence is proportionate to fault. Silver stymied this common sense reform despite findings that the law cost the state government $785 million a year and corresponds with an increase in injuries. In the wake of his corruption conviction, New Yorkers are right to wonder if Mr. Silver blocked Scaffold Law reform on behalf of his trial lawyer employers.

At the center of U.S. Attorney Preet Bahara's case against Mr. Silver was a referral scheme regarding asbestos plaintiffs. It is no surprise that, given Mr. Silver's control over state government and profit from asbestos lawsuits, New York's asbestos courts were recently rated the worst in the nation, routinely paying out three times the national average. In the aftermath of Silver's arrest it was reported that Mr. Silver's employers, Weitz & Luxenberg, received priority access to juries for asbestos cases. In a particularly brazen conflict of interest, Mr. Silver appointed Arthur Luxenberg, a partner at the firm, to the judicial screening committee, while claiming there was no conflict of interest at all.

We can fix this.

Albany can undo the years of corruption under Sheldon Silver by passing meaningful legal reforms. First, we can enact reasonable controls on medical liability payouts, as California has done, and impose higher standards for the expert witnesses in medical cases. Podiatrists should not be allowed to testify in neurosurgery cases.

Second, we should reform the outdated Scaffold Law to the common sense and widely used standard of comparative negligence. No law symbolizes the corruption of the Sheldon Silver era more than a law that holds contractors and property owners absolutely liable under nearly any circumstance. In doing so we could save hundreds of millions of dollars a year and reinvest that money in schools, roads, and bridges.

Lastly, we need to open up the asbestos trusts to transparency. Currently, plaintiffs are able to sue asbestos trusts, potentially recover millions, and then turn around and sue solvent companies for the same injuries. Because the trusts are not open to transparency, plaintiffs can allege entirely different sets of facts with little fear of discovery. In a recent case against the New York company Garlock Sealing Technologies, the judge forced discovery on the asbestos trusts cases and found fraud in 13 of the 13 cases the court reviewed. Opening the trusts to transparency would go a long way to ensure the funds are reserved for those who are legitimately injured as intended.

It is a new day in Albany. With these changes and more the New York legislature can show us that they work for New Yorkers, not the trial lawyers.

***
Thomas B. Stebbins is Executive Director of the Lawsuit Reform Alliance of New York

***
Have an op-ed idea or submission for Gotham Gazette? E-mail editor Ben Max: This email address is being protected from spambots. You need JavaScript enabled to view it.
@GothamGazette