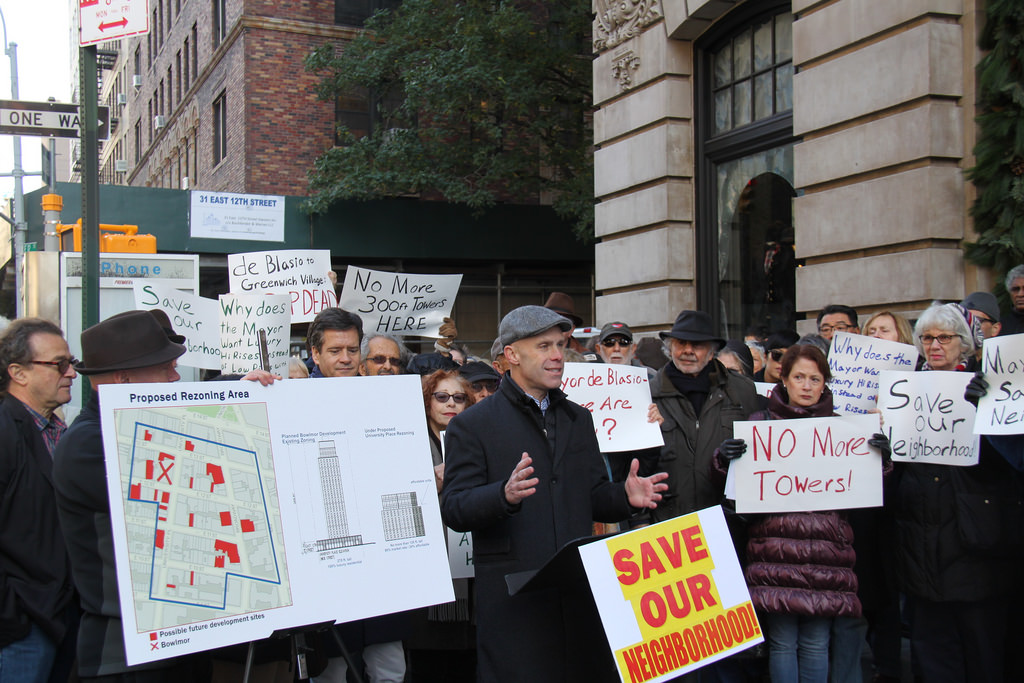 Andrew Berman, the author, at a rally

The Mayor's 'Zoning for Quality and Affordability' (ZQA) and 'Mandatory Inclusionary Housing' citywide rezoning initiatives, released jointly this fall, are finishing the first stage of public review at the city's 59 community boards. They're receiving a resounding thumbs down, by a 7-to-1 and 3-to-1 margin respectively. Why are measures aimed at increasing affordability and quality in new construction getting such a cold shoulder?

Perhaps because they would do little or none of either, and possibly more harm than good. The central tenet of ZQA is that if you increase the allowable height of new buildings, quality and affordability will improve.

For purely market-rate buildings, to which many of the proposed height limit increases would apply, this premise is almost laughable. The City's main contention is too many new buildings have 10- or 11-foot-tall ground floors instead of a more generous 13.5 feet, and new buildings should set back from the street to make room for planters in front. Neither is a concern I have heard a single New Yorker raise about new construction, but to achieve this, the City is willing to give developers an additional 5-20 feet in height for new buildings.

Never mind that many new buildings already have 13-foot-high ground floors, and sometimes more modestly-scaled ground floors are actually preferable. Or that setback buildings with planters make no sense on the large commercial streets where the new rules would often apply, and developers would get the extra height ZQA offers whether or not they set their building back and provide the planters anyway.

Such folly aside, the city's argument for raising height limits for 'affordable housing' is more insidious. In certain zoning districts, market-rate developments are now encouraged but not required to set aside 20 percent of units as affordable housing by offering additional market rate square footage if they do. There are height limits for these and all other new developments, to ensure that they fit in with their surroundings.

But the City claims the height limits prevent developers from including the affordable units, leaving no way to cram in all the extra space for the affordable and additional market-rate units, at least not without cramped, substandard spaces.

However, the facts don't bear this out.

About 50 percent of the new developments in such zoning districts in our area, Greenwich Village and the East Village, include the affordable units and the generous dimensions the City says we want in new developments. At the same time, we've seen many developers who had ample room to add the affordable units within the current height limits, but simply chose not to. The height limits were not an impediment; within this voluntary program, these developers simply decided it wasn't worth their while.

Nevertheless, the Mayor is proposing to lift the height limits for such developments by 25 feet or more, or up to 31 percent, though there is little or no evidence that it will result in a single additional unit of affordable housing being built. What it will do is increase out-of-scale construction in residential neighborhoods, and eliminate hard-fought-for height limits which were often delicate compromises that took years to craft and achieve.

While ZQA would do little or nothing to help affordability, making the current voluntary affordable housing program mandatory clearly would.

Many people think Mandatory Inclusionary Housing (MIH), the companion to ZQA, will do that. But under the Mayor's plan, it won't.

MIH would require that new residential developments include 25-30% affordable units. But under the Mayor's plan, MIH would only be applied in areas where rezonings also allow a large increase in the allowable size of market-rate housing development.

But many areas of the city will probably never see MIH because such large increases in the allowable size of development, especially market-rate development, are just not tenable. This will likely include many of the more affluent parts of the city with the strongest real estate markets, which are most lacking in affordable housing, and where the city's own studies say new housing is most likely to be produced.

So why limit MIH only to areas where you're substantially increasing the size of development allowable?

The Mayor claims he's doing this because if the program is too onerous, developers just won't build at all.

But this argument does not seem credible. In strong real estate markets of the city, developers are opting into the affordable program about half the time, which shows they are willing to build under these conditions (and the other 50 percent probably would if required to). And clearly developers are making money when doing so, meeting the legal requirement for allowing a "reasonable return" which zoning must meet.

By contrast, linking MIH to large-scale increases in the allowable amount of market-rate development might undermine the supposed goal of increasing affordability, to say nothing of maintaining neighborhood character and livable communities.

Cases in point: the Williamsburg/Greenpoint waterfront and West Chelsea/Hudson Yards. These are the two areas of the city which have seen the largest production of affordable housing in recent years, through programs similar but not identical to MIH.

But the price for the affordable housing in those neighborhoods was the tsunami of large-scale, market-rate housing to which it was attached. This resulted from zoning changes significantly increasing the amount of market-rate housing which could be built, which the city says would also be a prerequisite for using MIH.

The result: two of the most rapidly gentrifying, unaffordable neighborhoods in New York, with a scale and sense of place more like Hong Kong or Miami than New York. While the percentage of affordable housing under MIH might be slightly different (in those cases 27-28 percent was promised, as compared to MIH's commitment of 25-30 percent), the net effect would be pretty similar.

So why would the Mayor so aggressively pursue ZQA, which has little or no likelihood of increasing affordability, and choose to significantly diminish the effectiveness of MIH, which would?

It seems the Mayor is intent upon staying on the good side of the real estate industry, and thus far he has succeeded. As has been widely reported, industry players have been his biggest financial backers, and generous to the "Campaign for One New York," the nonprofit fund which supports the Mayor's 'affordable housing' and other initiatives. The Mayor seems to be trying to make his plans as palatable to big real estate as possible, regardless of how it affects the outcomes.

A further example: right now we are pushing the Mayor to rezone a 12-block area of Greenwich Village that allows 300-foot-tall towers, and guarantees they will be 100 percent luxury housing, hotels, or dorms. We want reasonable height limits for new development while keeping the allowable square footage the same, elimination of incentives for dorms and hotels, and incentives (or requirements, if the City agreed) for including affordable housing.

The administration's response: an adamant no. De Blasio wants to keep the existing luxury tower-only zoning. ZQA and MIH as proposed may please the Mayor's real estate backers, but won't accomplish their purported goals of increasing affordability and quality. Community Boards and groups across the city appear to be getting that. It remains to be seen if the City Council and others that will decide these measures' fate will as well.