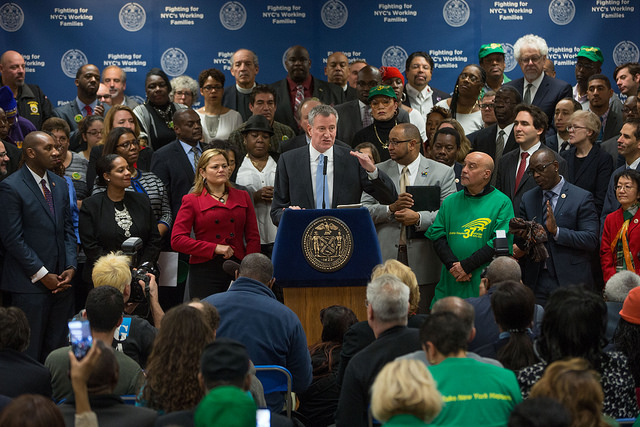 Early this month, New York City Mayor Bill de Blasio announced a guaranteed $15 minimum wage for all city government employees by the end of 2018. This is a big win for over 50,000 workers across the city struggling to provide for their families.

Unlike in Seattle and Los Angeles, where city officials are empowered to raise the minimum wage for the entire workforce in their cities, Mayor de Blasio is unable to unilaterally raise wages for all New York City workers. That power lies with Gov. Andrew Cuomo and the state legislature. The governor's efforts to lift the minimum wage to $15 are being hampered by a Republican-controlled state Senate.

De Blasio's decision to raise wages for city employees is a crucial independent step towards a more equitable city - and should be seen as an inspiration for cities around the nation. It also reflects the power and momentum of a groundbreaking worker-led countrywide movement demanding higher wages.

Even as state and federal administrations drag their feet on the inevitable question of a decent minimum wage for working families in the United States, de Blasio's gutsy move shows cities can and should take matters into their own hands.

The mayor's minimum wage raise closely follows his announcement last month giving six weeks paid parental leave, and up to 12 weeks when combined with existing leave, to the city's 20,000 non-unionized employees. The mayor has now moved to negotiate the same benefits with municipal unions. Again, New York City private sector workers must look to Albany or Washington, D.C. to move on paid family leave for all.

Mayor de Blasio's recent actions support his goal of lifting 800,000 New Yorkers out of poverty over ten years. More than 20 percent of the city's population lives in poverty, a huge swath of a city commonly associated with extraordinary wealth.

The last couple of years have seen unparalleled momentum from workers themselves - from New York City to Los Angeles and Chicago - calling for livable wages, resulting in minimum wage raises for fast food workers and other groups.

Workers are not waiting patiently on government officials – they are organizing in an unprecedented way. Progressive mayors like de Blasio are responding with sound policy, while less responsive officials are being put on notice. Cities like Los Angeles, New York City, and Chicago are paving the way, showing that it is possible to act independently of state and federal governments.

In addition, laws raising the minimum wage to more than the pitiful federal standard of $7.25 an hour have passed in a number of states. There are now campaigns to raise the floor and standards for workers being led in 14 states and four cities. This momentum is building into a crescendo that will have deep implications for the 2016 presidential election.

Nearly half of our country's workers earn less than $15 an hour and 43 million are forced to work or place their jobs at risk when sick or faced with a critical care-giving need. Now is the time for cities to listen to their workers and override state and federal passivity to allow millions of hard-working Americans to provide for their families.