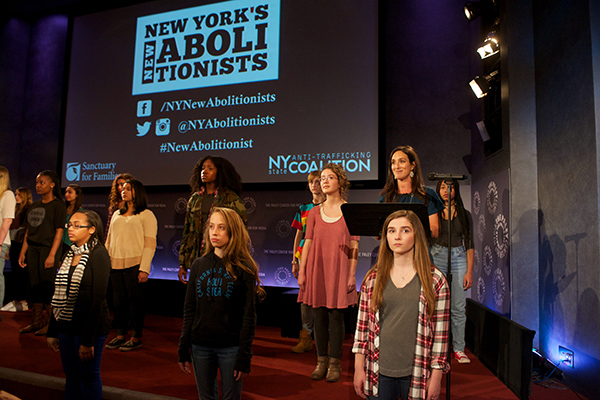 Lauren Hersh, the author (at podium), and other activists

Sarah was 13 years old when she was lured into prostitution by two men from her New York City neighborhood. For the next two years, she was sold to buyers who were eager to purchase her adolescent body. Her pimp required her to meet a quota and when she didn't, she was brutalized.

There were many moments when Sarah tried to leave the life of prostitution. Each time, her exploiter would threaten to harm her or worse, her little sister. Sarah felt helpless and trapped. So, she stayed.

Sarah was bought by men who wore business suits and went home to their wives and children. The money they paid would pass through Sarah's hands and land in her pimp's pocket. While her pimp and the buyers operated with impunity, Sarah was harassed and arrested by police more times than she could count.

For years, New York court dockets were filled with women and girls who were pulled off the street, brought before judges, sent to jail, and then returned back into the hands of their exploiters. This vicious cycle was fueled by laws that failed to adequately protect victims and a public perception that people in prostitution were there of their own free will and should be punished in an effort to "clean up the streets."

In 2013, Chief Judge Jonathan Lippman created Human Trafficking Intervention Courts after recognizing that the vast majority of women arrested for prostitution were, in fact, victims of trafficking or other forms of exploitation. These courts sought to provide people in prostitution with exit strategies and comprehensive services, instead of jail time and criminal records.

Simultaneously, a widespread movement to change the New York State Human Trafficking Laws was gaining momentum. Survivors and advocates were frustrated that in New York, sex trafficking was still a non-violent felony and people who purchased children for sex were receiving lower penalties than those who committed a purse snatch.

Albany responded to pleas for progress. In October 2015, Governor Cuomo signed the Trafficking Victims Protection and Justice Act into law, a comprehensive bill that increases accountability for those who exploit, while providing protections for some of society's most marginalized. Last week, survivors around the state cheered as this law went into effect.

The Trafficking Victims Protection and Justice Act can absolutely be a game changer. But, like any law, it makes no difference if it is not enforced. And this is a significant task.

Sarah's experience with our criminal justice system signals a need for change.

Specifically, we need widespread police training not only about the new law, but the complexity of exploitation and best practices for prevention. Police departments must continue to shift perspectives on prostitution.

Government resources must be used to prosecute traffickers and to eliminate the demand for prostitution by going after buyers. It's a simple case of supply and demand: without buyers, there's no profit for the sellers. Successful trafficking prevention must include sex-buyer accountability.

Law enforcement cannot eliminate trafficking alone. Resources must be allocated to heighten community awareness and provide in-depth training for those on the front lines. School teachers, medical professionals, and those working with children in foster care, LGBT youth and other vulnerable populations often meet young victims, but without adequate trafficking training, they may miss critical signs of exploitation.

Today, Sarah* is a lawyer and one of the fiercest anti-trafficking advocates you will ever meet. But she can't do it alone. The notion that prostitution is a victimless crime must be banished from our vernacular. People in prostitution must be seen for what they are: victims of modern-day slavery and sexual violence.

It's incumbent on all of us – including our elected officials at the federal, state and local levels, the judiciary, law enforcement, and everyday citizens – to do what we can to prevent even one young girl from living the hell that Sarah endured.

*Note: Sarah (a pseudonym), is now in her late twenties and still receives threats against her life from her former pimp. Her safety requires full anonymity.

***
Lauren Hersh is Director of Anti-Trafficking Policy and Advocacy at the NYC-based Sanctuary for Families, a leading service provider and advocate for survivors of domestic violence, sex trafficking, and related forms of gender violence.