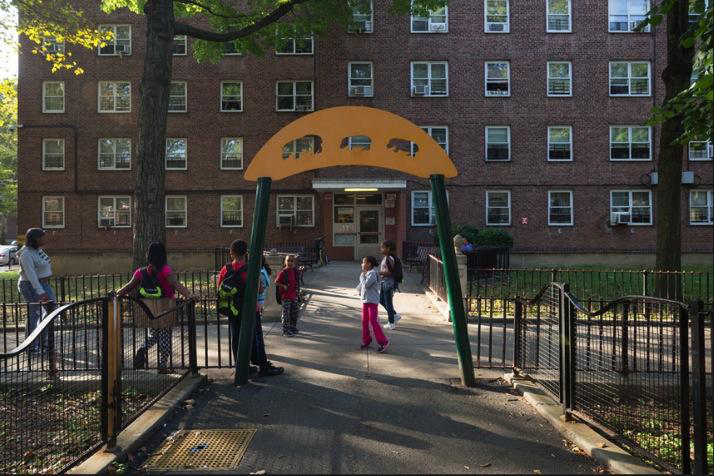 Should NYCHA give up its controversial plan to generate revenue by adding mixed-income 50/50 percent (market/affordable) buildings at the Wyckoff Gardens and Holmes Towers public housing developments? Many residents and activists at these two sites dedicated for "infill" as part of NYCHA's NextGen Neighborhood initiative remain leery at the prospect of change, even if it means they won't get the renovated apartments and new community facilities that market-rate development can partially bankroll.

Establishing a precedent for some market-rate housing on NYCHA grounds at these developments, despite resistance, remains one promising avenue to improving both public housing apartments and NYCHA's bottom-line. The fees from market development won't pay for a new utopia, but they could make a major difference in long-term quality of life. New York has, after all, finally reached the end of the compromised housing model we should refer to as "First Generation" NYCHA. Dramatic changes are long overdue, and probably essential, if NYCHA is to remain desirable housing for the city's working class.

NYCHA has made its reputation on making the best of difficult situations rather than building utopia. The founders of the New York City Housing Authority in the 1930s, such as Mayor Fiorello LaGuardia and settlement house leader Mary Simkhovitch, wanted public housing to clear the millions of apartments in tenement slums. When money was no object during the New Deal they built America's greatest and most enduring public housing projects: Harlem River Houses and Williamsburg Houses. But when the press and federal government found out how much this high-quality housing cost, NYCHA was forced to economize on everything (such as no closet doors!) and it began to mass produce red brick, often bleak, "towers in the park" across the city's neighborhoods.

Even more important compromises followed. The founders had aimed for mostly working class families whose rents covered expenses, and they carefully screened applicants to choose those who would make peaceable, rent-paying tenants. But as the years went on federal directives and public pressure forced the agency to accept poorer families. The number of families on public assistance, many with multiple social and family issues, skyrocketed by the 1970s. NYCHA family incomes, even those with jobs, began to lag well behind those of the rest of the city. Weak rental returns were papered over with federal subsidies, but social problems in many projects became severe.

Behind the scenes NYCHA leaders pushed back on federal rules as best they could, varying building heights, including community centers, adding more maintenance staff, constructing higher-income developments financed with city money (rather than federal), creating a housing police, building on vacant land, and prioritizing working families. But Robert Moses, whose top priority was slum clearance, and federal bureaucrats, who provided most of the funding (and still do today), called most of the shots. As a result, First Generation NYCHA (today's 178,000 units) became isolated physically and socially, with a more racially segregated population and fewer economic opportunities than the city as a whole. A quarter of NYCHA's tenants regularly fail to pay their (low) rents and crime is much higher on and around NYCHA projects than almost anywhere else in the city.

Billions in federal dollars have been spent to maintain these complexes, now aging en masse. But today they suffer from years of federal cutbacks that began around the year 2000, which have led to deferred maintenance and other reductions in service. Energy and labor costs are out of line with rent/subsidy sources. Still fully occupied and low rent, NYCHA projects are about the best outcome that could be expected from a set of nearly debilitating compromises.

Saving the system requires dramatic changes. While NYCHA's early leaders who built these places always intended to provide quality permanent homes, they would not endorse the notion that what they built should be preserved for another century without alterations or adaptations. They built what they could, where they could, as well as they could given limited funds. But they rarely built for the ages and their ideas evolved continuously based upon program, requirements, neighborhood opposition, and more.

Nor would NYCHA's founders endorse the notion that public housing or new buildings proposed in the NextGen plan should be reserved only for the poor, as is the aim of many current critics. To the contrary, they believed in a working-class system that was mostly self-supporting and self-policing. NYCHA's founders endorsed the notion of mixed-income public housing projects and would find the resistance of today's residents to income mixture unwise from both a social and financial perspective. NYCHA had a much better rent collection record, and projects were safer, when the system housed a wider income range of New Yorkers.

Today's residents and housing advocates are right to demand a voice in the process, and maybe even priorities for new apartments that rise on the grounds. But they also need to accept that financially and physically First Generation NYCHA is unsustainable without new sources of non-governmental revenue. No federal, state, or local official is promising to deliver the billions needed for additional renovation. Mayor de Blasio has committed only $300 million of the city's money to new roofs; federal operating and capital subsidies, which still provide the majority of NYCHA funding, have been in freefall since 2000; and Governor Cuomo's budget proposal provides $20 billion for new affordable housing and nothing for NYCHA.

Rethinking NYCHA design, moreover, is long overdue. The plain brick buildings are, by and large, poorly integrated with their surrounding neighborhoods. The vast open spaces surrounding most towers are often underutilized, unsafe, or unnecessary, such as parking lots in Manhattan. Many NYCHA residents recognize that their complexes could use more income diversity; more units, especially for seniors who could be moved out of larger family apartments; new community facilities; and more stores to create variety and safety, through additional eyes on the street. Yet the cash to pay for these upgrades, including renovation of their own apartments, is more likely to come from a mix of market-rate and affordable development rather than new subsidies alone.

First Generation NYCHA was a compromise solution that seems to have run its course. Housing advocates need to be honest with NYCHA residents about the realistic versus imaginary paths to a better system. Infill isn't the only option for rebuilding NYCHA, and NYCHA leaders are pursuing every source of funding they can find, but residents should take advantage of the fact that New York's overheated real estate market could help fund the renovation of their buildings. It is time for NYCHA residents to make peace with city leaders, and begin to welcome a mix of market dwellings with subsidized ones, so that another generation can benefit from public housing.

*This is part two of a three-part series on NYCHA from Nicholas D. Bloom and partners*
Read part one: Rebuilding NYCHA: A Fresh Look
Read part three: Looks Matter, Especially in Public Housing

***
Nicholas Dagen Bloom and Matthew Gordon Lasner are Co-Curators of the current exhibition at the Hunter College, East Harlem Gallery, Affordable Housing in New York and Co-Editors of the anthology by the same name available here.