April 07, 2016 | by Anusha Venkataraman and Rodrigo Camarena
Twitter
IT news 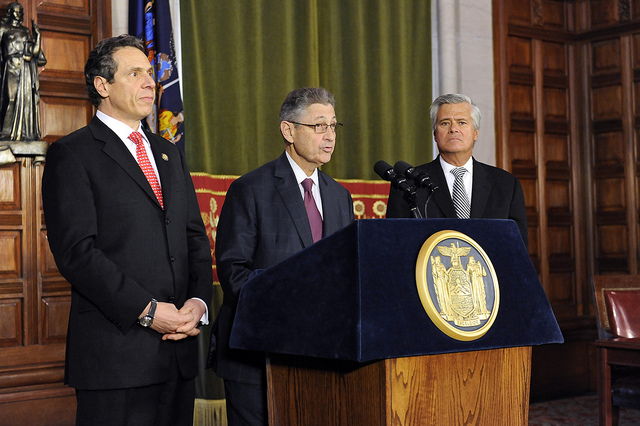 Albany of yesteryear (photo via The Governor's Office on flickr)

With an April 14 date set for the Clinton-Sanders Brooklyn debate, New York and Kings County are now center stage in the ever-engrossing presidential election. Though bringing the ninth Democratic presidential debate to Brooklyn might help New Yorkers become more informed voters, it also sadly serves as a timely distraction from the latest setback to progressive governance reforms in the Empire State.

Thanks to the exclusion of any government ethics reform measures in the state budget deal reached last week, New Yorkers will continue to live in a state that offers public pensions for longtime legislators turned felons, loopholes for special interest groups to funnel millions into local campaigns, and no limits on outside income for our part-time legislators.

With wealthy donors this free to inject money into politics, it's easy to understand why in the last decade over 40 New York lawmakers have been arrested or left office after being accused of impropriety, including a notable few from Brooklyn. As such, it’s also not much of a surprise that the Center for Public Integrity has given New York State a D- in its State Integrity Investigation and consistently ranks New York among the worst for government accountability and transparency nationwide.

When the presidential candidates debate national politics in our borough, let’s hope they remember that all politics are ultimately local. If Senator Sanders is committed to taking money out of politics, there are plenty of easy targets right here in New York. If Secretary Clinton cares about building trust with voters, she could be served well by demanding an ethics package in her own state.

New Yorkers are frustrated with business as usual in Albany—a sentiment easily seen in abysmal voter turnout numbers. While a Brooklyn debate will help both campaigns excite their supporters in time for the April 19 primary, supporting reforms to the state’s election laws would ensure that New York voters have their voices heard in all elections.

Common sense reforms like online voter registration, early voting, and same-day party enrollment are commonplace in other U.S. states but denied to New York voters. These reforms would not only increase voter participation for working families but help newer residents still registered in their long-abandoned “home” states have a voice in electing their representatives.

Brooklyn is home to a strong Democratic majority and some promising progressive leaders but we’ve been “led” by entrenched political powers for much too long.

New York and Kings County can become more democratic, but this can only happen through ongoing political engagement on the local level. Before we start celebrating public debates between national candidates in our community, let’s demand public conversations on decision-making in New York State, a modernized electoral system, and state ethics rules with teeth. Whether we vote for our first democratic socialist president or first female president in New York’s primary, let’s not let the revolution stop there.