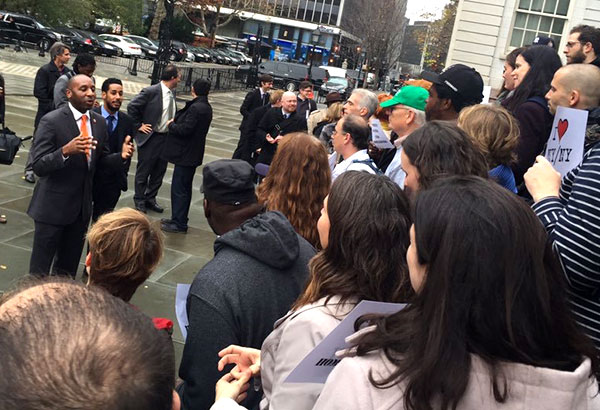 As co-chairs of the New York City Council’s Progressive Caucus, we have worked closely with Mayor de Blasio since he took office. It is clear that the mayor has delivered for our constituents and all 8.4 million New Yorkers in transformative ways. From affordable housing to quality jobs to expanded educational programming, New Yorkers are doing better and the scale of the accomplishments is substantial.

In partnership with our Speaker, Melissa Mark-Viverito, and the City Council, Mayor de Blasio has been helping to create a more equitable New York City. But this progress did not happen by chance, and it’s no foregone conclusion that we will be able to sustain it. We cannot allow our momentum to be derailed, destabilized, or diminished.

Under a boldly progressive mayor and Council speaker, New York is safer and public policy is more equitable than at any point in our lifetimes. We must protect our progress, join us as we launch our #ProtectProgress campaign, which includes the following highlights of this work, the Top 10 Accomplishments, by the Numbers:

2. Making Pre-K Universal: More than 68,500 children are getting the head start they deserve this year with full day pre-kindergarten classes for all of New York’s four-year-olds.

3. Developing and Preserving Affordable Housing: Over 100,000 New Yorkers have access to 40,000-plus new units of affordable housing. More affordable housing units were created in 2015 than in any year since the city’s housing department began.

4. Creating Economic Growth: More New York City jobs than ever before, totaling 4,296,100 across all five boroughs as of March 2016. This includes 254,900 new private sector jobs created during this administration, resulting in an unemployment rate of 6.1%, lower than other large cities like Chicago, Los Angeles, and Philadelphia. This is in part due to new legislation preventing discrimination against job seekers based on credit scores and prior convictions.

7. Embracing Immigrant Communities: IDNYC enables non-citizens to participate in the civic and cultural life of the city, with 855,000-plus cardholders who have secured the peace of mind that comes from recognized government identification.

8. Extending New Yorkers’ Legal Right to Sick Leave: 3,400,000 private and nonprofit sector workers have access to paid sick leave thanks to an expansion created in partnership with the Council and the Mayor’s robust education campaign.

10. Supporting a Living Wage: A $15 living wage is now guaranteed to every City worker and employee of nonprofit organizations contracted with the City, and the Mayor and Council have advocated for higher wages for all workers across the state.

We must be proud of these accomplishments while we also build on them. Today, we call on progressives from Bushwick to Harlem, from the Rockaways to Riverdale to step and up and #ProtectProgress. Parents: tweet from your UPK sites that didn’t exist two years ago! Bicyclists: tweet images of your new protected lanes that are helping to save lives! IDNYC cardholders: tweet from wherever you are putting your card to use!

Let’s get #ProtectProgress into the conversation, so that together we can promote real results that Mayor de Blasio and the City Council have delivered for New Yorkers.