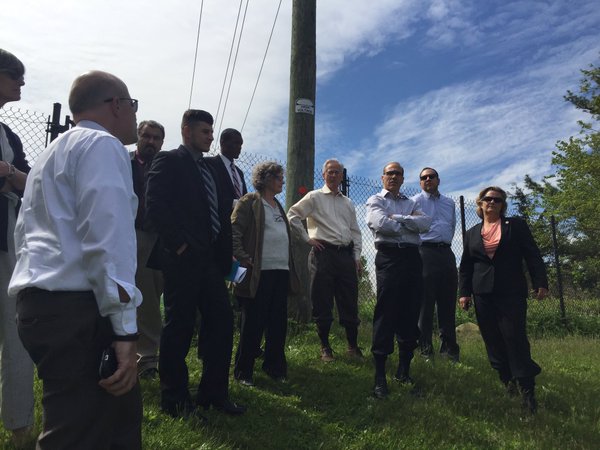 BP Oddo, the author, with a group on Staten Island (photo via @StatenIslUSA)

The divide is even greater than I feared.

The chasm between how folks across this city see our world is even wider than what it seemed. As a Republican fully aware he’s in a blue city - a guy who once led a merry band of between two and five GOPers in a legislative body of 51 - I know better than most how disparate the various points on the political spectrum are in this town, and how the perceptions, reality, and everyday feel differs across New York City.

I lived that divide and operated within it when I was in the City Council. And to deliver for the smallest, least politically influential borough, one that was either ignored, neglected, or treated as fifth of five except during the Giuliani years, I figured out how to respect the divide, maneuver within it, and effectively represent my community.

So when I say the breach is even more expansive than I once feared, it truly is.

The City Council’s Criminal Justice Reform Act is intended to help New Yorkers represented by a majority of the City Council. It’s intended to address problems that are real to them and their constituents. With that said, to folks who live on Staten Island like me, and those in other areas such as Southwest Brooklyn, parts of Queens, and parts of the Bronx, this package represents a chainsaw where a scalpel is needed. We should not be encouraging people to think we don’t care about negative behavior like urinating in public or throwing trash on the ground.

Ultimately, the bills are Miracle Grow for the perception that lawlessness lurks around the next corner, a perception that we know can feel awfully similar to reality. A furthering of this ideological agenda corrosively eats away at the thin line between civilized communities and disorder.

For the love of Pete (not Pete Vallone Jr. or Sr., but man, where have you guys gone...), can’t we even agree in this town that litter is wrong and should be punished as often and in as financially impactful a manner as possible? One unified voice coming from the Council and other sectors of city government should be all of us saying to the city agencies that the guy who throws the bag of White Castle burger remnants out the window of his car and the mocha latte drinker who flings her empty plastic cup indiscriminately into a street should pay dearly.

But we can’t even agree on that. As someone who has spent too much time, energy, and taxpayer money these last 28 months as Borough President trying to change the behavior of the selfish, ignorant Staten Islanders who continue to litter, that hurts my head.

I am keenly aware that in many ways - from home and car ownership percentages to housing typology and various other barometers - Staten Island more closely resembles the rest of America than the other four boroughs. I understand this is a left-of-center town during this “progressive” era of local government, but some truths are grounded in history and history should not need to repeat itself for us to understand the consequences of actions like passing the Criminal Justice Reform Act. So-called quality-of-life offenses rob residents of the city they deserve and expect. As a city we should be doing more to discourage litterers and those engaged in public urination and other anti-social acts on behalf of the overwhelming majority of New Yorkers who don’t engage in these behaviors.

Whether folks liked or disliked Rudy Giuliani, his unquestioned, greatest and lasting legacy is that every New Yorker now has a heightened expectation of how safe and orderly New York City should be. Individually and collectively we will never tolerate a return to the “bad old days.” I am not one who embraces the screaming tabloid headlines announcing the 1970s have returned. That’s silly. I simply don’t like seeing perhaps well-intentioned, but nonetheless misguided steps, even small ones, in that direction.

***
James Oddo is the Staten Island Borough President and a former Minority Leader of the City Council. On Twitter @HeyNowJO.