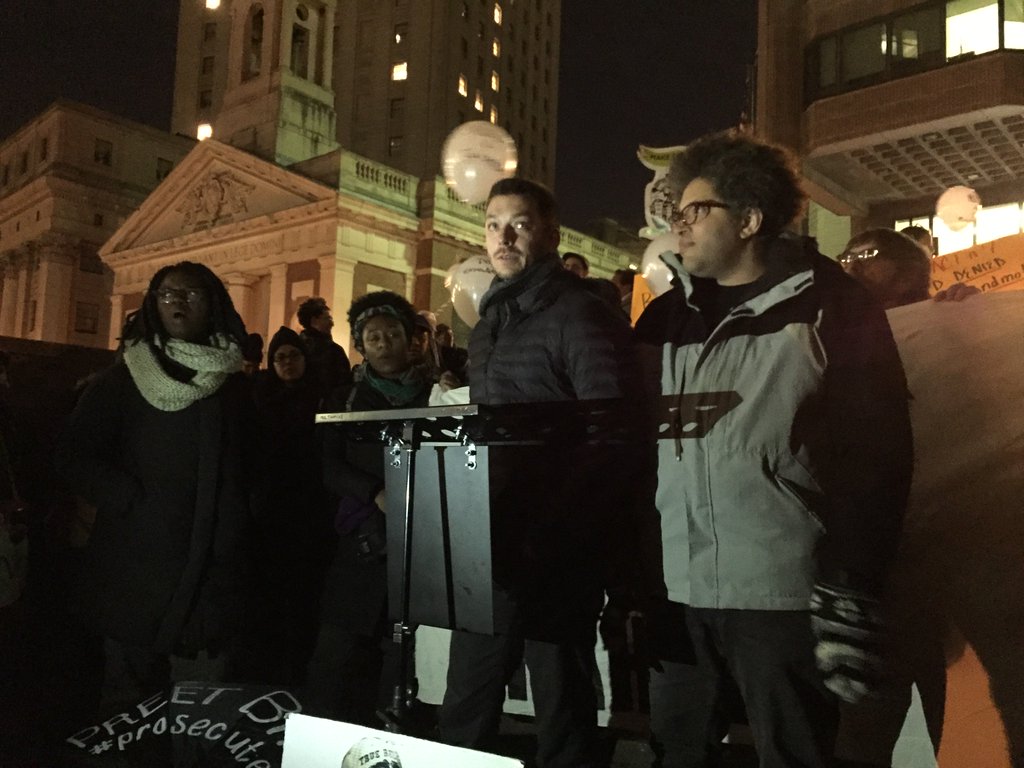 I’m lying awake at 4 a.m. wondering if our calls for justice will ever be answered. The evening before I was marching in midtown, protesting the tragic killing of Alton Sterling. It’s been 17 months since the shooting of 12-year-old Tamir Rice and two years since Eric Garner’s death by suffocation at the hands of police. Even with cell phone cameras making this deadly reality no longer something we can ignore, justice remains elusive.

Lying awake, scrolling through Instagram, I noticed a lot of people liking and re- posting a graphic that’s the focal piece of Beyonce’s redesigned website. The redesign is dedicated to the killing of black people by law enforcement in this country over the past two years. It provides a stark picture of our condition. It’s simple enough: a black background with all the names of the murdered typed in white. I looked for my childhood friend’s name. He was killed by Florida law enforcement around the same time as Eric Garner. Not a highly publicized case, so I thought it might have been overlooked. But no, there it was.

I couldn’t stop thinking about how parents feel when their sons and daughters are killed. The horrible grief family members endure. I felt sick. And why shouldn’t I? What if my own father stepped outside his home and didn’t return? Seeing all of this death, having our voices ignored and justice denied time after time, I felt truly demoralized in a way I had never before in my life.

Two years ago, protesting the Garner tragedy, I took part in my first civil disobedience action on the Upper West Side. Soon thereafter, I found myself engaged in community organizing with an organization called Jews for Racial and Economic Justice (JFREJ), searching for peaceful ways to effect positive transformation. I then became JFREJ’s representative to Communities United for Police Reform, a coalition made up of dozens of organizations working toward ending discriminatory policing practices in New York City and beyond.

My main focus and energy has been working to support the passage of The Right to Know Act. This is important legislation that reinforces Fourth Amendment rights on the ground and has the potential to improve relations between the police and communities of color. It’s composed of two bills: the “ID bill” requires an officer to identify him- or her-self when having an interaction with a civilian, and the “consent to search bill” requires officers to inform citizens of their right to withhold consent to be searched where probable cause is absent.

Passing and implementing this legislation would go a long way toward normalizing police-community relations in this city and will allow us to take a step toward the justice that communities of color so richly deserve.

Sadly, the City Council Speaker, Melissa Mark-Viverito, is currently unwilling to bring this groundbreaking legislation to the Council floor for a vote, even though a majority of the Council has signed on to both bills. Instead, she made a backroom deal with Police Commissioner Bill Bratton - the architect of discriminatory Broken Windows policing - and scrapped this bill in exchange for adding a watered-down version to the NYPD patrol guide.

The compromise eliminates any guarantee that individuals will be notified of their right to refuse a search when there is no legal basis for one and discards the requirement for officers to identify themselves in most instances, including when individuals are questioned without reasonable suspicion. This strips the teeth from what is outlined in The Right To Know Act and delivers none of the reforms that President Obama’s Task Force on 21st Century Policing recommended.

The bottom line: we need The Right To Know Act to become law. We know from a long and painful past that administrative prohibitions or protocols do not serve as true agents of change. For more than twenty years chokeholds have been prohibited by the patrol guide, yet this did not stop officers from using that technique resulting in the killing of Anthony Baez in 1994 and, more recently, the killing of Eric Garner in 2014. Effective? I think not. There also happens to be legislation making police chokeholds illegal (except, of course, in life-threatening situations) that is opposed by Commissioner Bratton and has not moved through the City Council.

Would passage of the Right to Know Act be the cure to police brutality? No. More is needed. Education, training, strict enforcement of NYPD rules, and real accountability instead of mere lip service, would also go a long way to eliminating police violence against citizens.

It’s also true we may never be able to eradicate all racial bias, and that some people can’t be educated or trained to be different. However, enacting laws that genuinely require the police to respect black people through proper communication will, in the process, respect everyone’s life, including the lives of police officers. The Right to Know Act would be a positive step on that road to de-escalation and reconciliation.

Let’s demand the Right to Know Act be brought to the City Council floor for a vote. True democracy requires nothing less.

***
Jason Salmon is a community organizer for Jews for Racial and Economic Justice and owns Treehouse Recording Studios in Brooklyn. On Twitter @JasonASalmon.