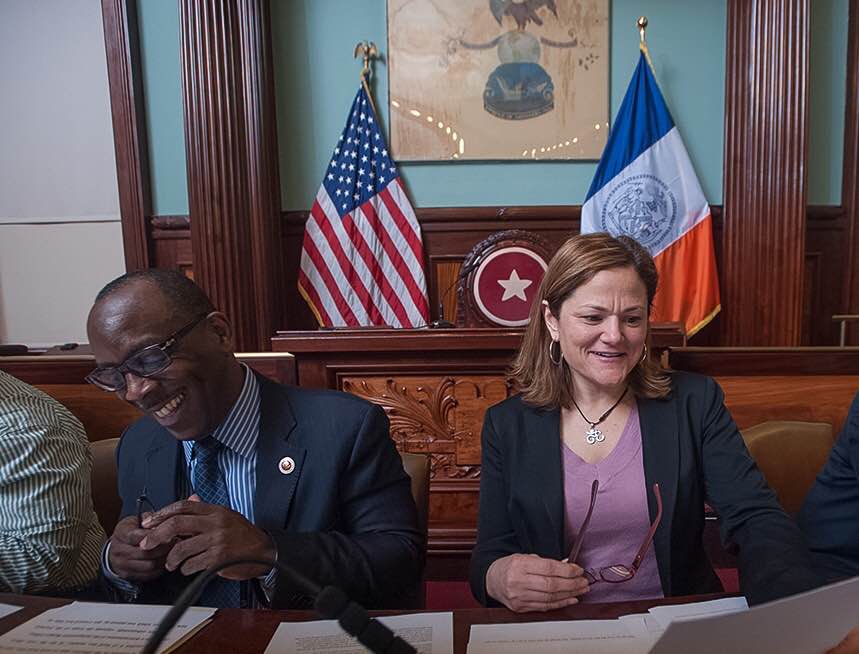 In New York, we have always embraced diversity. We strive to make sure that everyone feels welcome—no matter their race, faith, or background. This has never been more important for Muslim Americans, who have been the target of vicious political attacks during this election cycle.

This month, Muslim Americans across the country and in New York City will be celebrating Eid al-Adha. As our fellow community members observe this important religious holiday amidst a rising trend of Islamophobia, we must be mindful of their safety. Let us continue to set an example for strengthening our community and promoting open-mindedness.

Recently, Muslims have been the target of hate speech and violence in their homes, schools, neighborhoods, and places of worship. These verbal and physical attacks represent a broader trend of discrimination against Muslims.

According to the Bridge Initiative at Georgetown University, anti-Islam rhetoric in the United States has increased significantly during the current presidential election cycle. In fact, anti-Muslim attacks surged in the days and weeks after Donald Trump made anti-Muslim statements, suggested instituting a database to track Muslim Americans, and called for shutting down mosques. In recent months, organized, sometimes armed, protests against mosques have increased, as well as the targeting of Muslims for bullying or hate crimes.

This year’s presidential election has seen the candidate of a major political party not only endorse bigoted views, but also encourage the spread of these attitudes among his followers. Donald Trump’s message of bigotry has created a hostile climate against Muslims, immigrants, African Americans, Latinos, and women, dividing and weakening our communities. This marked increase in Islamophobia in the United States means that every day Muslims are unable to go about their daily lives without worrying about their personal safety. As we have seen with Imam Alauddin Akonjee and most recently with Nazma Khanam, Muslims are frequent targets of hate and violence. As a Latina legislator, as an African-American Muslim, we will not let any hateful rhetoric go unchecked and unchallenged. We have and will continue to stand up and speak out.

When an individual’s ability to publicly practice his or her faith is threatened, all of our liberties are at stake. We need to protect the freedom to practice faiths of all kinds and to educate others about diversity. That’s why the City added two Muslim holy days to the public school calendar in 2015, to ensure that all Muslim-American students can celebrate holidays together with friends and family.

Our fellow City Council members have also been very vocal about protecting the rights of Muslims in New York to practice their faith in peace and safety. Just last December, we helped organize a large interfaith rally on the steps of City Hall in coordination with other elected officials and faith leaders to denounce Donald Trump’s anti-Muslim and anti-immigrant remarks.

Despite challenges, our city will stand strong against these messages meant to divide us. Muslims continue to play important roles in our communities, contributing to the multicultural fabric of our city and our nation. Muslims are important figures in New York City arts, sciences, and businesses, as well as in public service – like Congressmen Keith Ellison and Andre Carson. Muslims are artists, teachers, doctors; mothers, fathers, and cherished members of their neighborhoods.

Institutionalizing Islamophobia only causes our communities to live in fear. This month, in the spirit of Eid, we must reject bigotry and collectively work together to spread awareness and hope. We have a responsibility to denounce discrimination and violence and to ensure that all communities can feel safe and respected in New York City. That is why, this Eid, we ask everyone in our broader community to do what they can to spread kindness instead of hatred, understanding instead of suspicion, and acceptance instead of close-mindedness.

Traveling across this city, whether to Bay Ridge or Midland Beach or Astoria, to connect with New Yorkers of all backgrounds and faiths has always been a highlight of serving in elected office. All of us are part of the New York City community, and we look forward to celebrating Eid together.

New York City is home to one of the most vibrant Muslim communities in the country. In order to continue preserving the values that make this city so special, we need to make sure that we are listening to the needs of Muslim-American New Yorkers.

Islamophobia has no place in New York City. Instead of embracing hateful rhetoric, we should be lifting up Muslim voices and sharing the stories of Muslim-Americans.

New Yorkers have always been stronger together. Together, we can work to protect and promote diversity and defeat Islamophobia.

***
Melissa Mark-Viverito is the Speaker of the City Council and Daneek Miller represents parts of Queens and is the only African-American Muslim City Council Member. On Twitter @MMViverito and @IDaneekMiller.